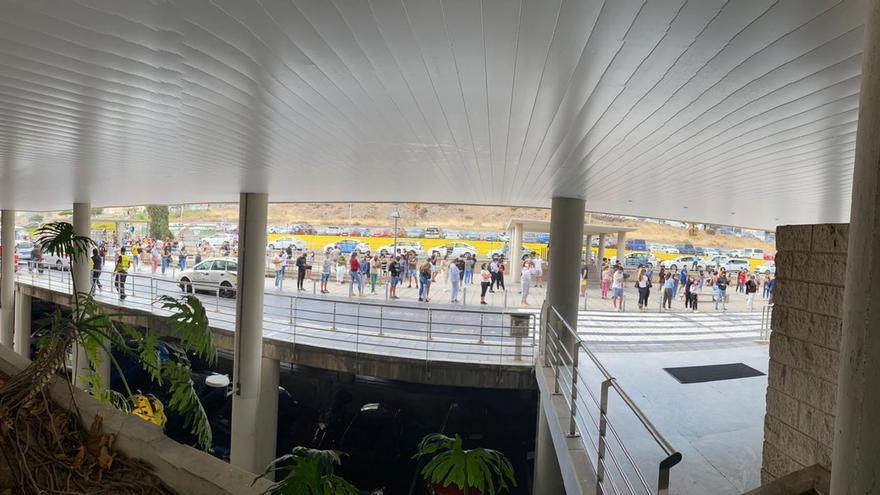 The Canary Islands Health Service (SCS) has so far carried out 1,757,606 diagnostic tests in the Islands, of which 9,720 correspond to Wednesday. 10.4% of the tests carried out in the Archipelago give a positive result, a percentage that in just two weeks has risen three points.

In the Canary Islands there are 1,044,058 people who have already received the two doses of the vaccine against covid-19, which represents 53.25% of the target population. In addition, 69.90% of canaries over 12 years of age already have at least the first dose of the serum. The objective set by the regional government is that by the end of August 70% of the target population is immunized against SARS-CoV-2. The SCS vaccination teams have already inoculated 2,306,536 doses of the vaccine, which represents 92.65% of those received so far by the autonomous community.

The fifth wave is especially affecting the younger population, with which the Ministry of Health has accelerated the rate of vaccination of those under 40 years of age. Immunization of group 10, which includes people between the ages of 40 and 49, has advanced so that 57.89% have already received both doses. Regarding group 11, made up of people between 30 and 39 years old, 18.89% are already immunized. For its part, group 12, made up of young people between 20 and 29 years old, has coverage with a dose of 33.43%. In addition, 6.25% of canaries between 12 and 19 years old have already inoculated the first dose of the vaccine.

This weekend Health organizes two new vaccination days without prior appointment in Gran Canaria, Tenerife, La Palma and Fuerteventura. In the capital islands, vaccination will be aimed at people over 18 years of age, while in Fuerteventura and La Palma they will focus on immunizing residents over 16 years of age. The facilities enabled will have a total of 21,712 doses, which will be administered tomorrow and Sunday to the first people who attend and until the end of the reserved stock. This system of vaccination without an appointment will be combined with the administration of doses previously scheduled for the different age groups.

Tomorrow and Sunday you will be vaccinated without an appointment from 9 a.m. to 4:30 p.m. in Expomeloneras and there will be 2,500 doses available each day. At the Dr. Negrín University Hospital of Gran Canaria the vaccination will take place tomorrow between 9 a.m. and 4.30 p.m. and the number of vaccines is 2,500. For its part, Pedro Hidalgo’s fighting ground will vaccinate without an appointment on Sunday from 9 a.m. to 4:30 p.m. a maximum of 2,500 people.

Residents in Fuerteventura over 16 years of age who have not yet been vaccinated may go without an appointment tomorrow from 9 a.m. to 1:30 p.m. at the Puerto del Rosario Conference Center, accessing the building through the side entrance, in front of the Municipal Swimming Pool. At this point, 700 doses of the vaccine will be available. The Ministry of Health recalls that people over 18 can continue to make an appointment through the usual channels: in the SCS miCitaPrevia app or on the website www.canariassevacuna.com or on 012 (928 301 012 or 922 470 012).

After the four major reference hospitals of the Archipelago activated the contingency plan in the face of the increase in healthcare pressure, the General Hospital of La Palma It has been forced to take the same measure, to be prepared for the possible increase in demand due to the growth of infections and income due to the pandemic.