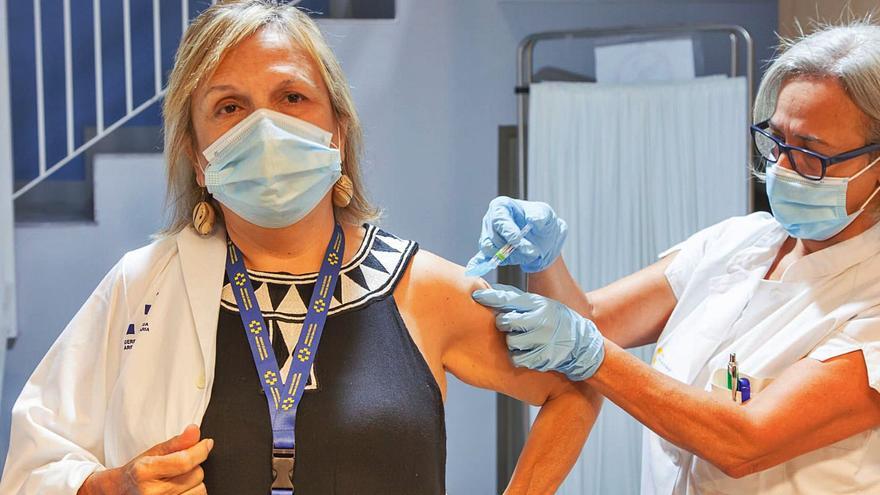 The Archipelago begins the campaign against the flu with 380,000 doses of vaccines

The Archipelago begins the campaign against the flu with 380,000 doses of vaccines

The Ministry of Health of the Government of the Canary Islands yesterday began the flu vaccination campaign in all the health centers of the Islands, in a context in which Covid-19 infections in the autonomous community have experienced a significant decline. Precisely, to avoid coinfection – and confusion – between both viruses and protect the most vulnerable population, the General Directorate of Public Health has distributed 380,000 doses of the medication, of which 320,000 have been purchased by the health administration itself and 60,000 by the Ministry, which translates into an increase of 49% compared to last year. The objective of the Canarian Health Service (SCS) is to achieve a vaccination coverage of 75% among those over 60 years of age and health workers, since last year the percentage reached was 57% and 35%, respectively. In addition, the action aims to reach 60% of pregnant women. On this occasion, four types of vaccines will be administered: two trivalent –formed by three strains–, one of them especially indicated for the elderly who are in nursing homes; and two tetravalents –composed by four -.

In this sense, among the trivalent vaccines are the drugs marketed under the name Fluzone and Chiromas. The first is aimed at institutionalized persons over 65, while the second serves those over 65 in general. For its part, the tetravalent group is made up of Vaxigrip – for patients between six months and 64 years with underlying pathologies – and Influvac, which was released last year for pregnant women and which this year is also extended to staff sanitary.

“The preparation of vaccines does not only depend on the predominant strains, but also on the level of exposure that different groups face and the degree of immunity that people have. Older people and patients affected by comorbidities, for example, have a lower defense system, so vaccines cannot be the same for everyone ”, explained Dr. Virginia Cabrera, director of the basic health area of ​​Alcaravaneras. To later add that, “the goal of the World Health Organization is always to protect the weakest.”

Precisely, in order to ensure the safety of the most vulnerable people, the Alcaravaneras health center has set up a room in the parking area to administer vaccines and avoid unnecessary access to the building.

In addition, opportunistic recruitment will be a key activity during this campaign to reach as many people as possible. “We will take the opportunity to attract users who attend the consultations in order to avoid having to come to the health center twice. In fact, we have an agenda of patients who are being anticoagulated with Sintrom and our purpose is to vaccinate this group on the same day that they have the blood clotting levels checked, ”said the doctor.

It should be noted that the Alcaravaneras health center already has a two-week waiting list to receive the antidote. “I was struck by the fact that today – yesterday for the reader – so many people have failed the appointment. We had planned to vaccinate more than 20 people and we have succeeded thanks to opportunistic recruitment. Unfortunately, many patients have been absent, “said Dr. Cabrera with concern.

It should be remembered that the patients who are part of the risk groups are all chronically ill, people suffering from comorbidities and immunosuppressed, those over 60 and, as a new fact, hypertensive. “For the first time, hypertensive people have become part of the risk groups due to the complications that they may suffer, in case of contracting the Covid-19 infection and the flu,” said the director of the basic health area of ​​Alcaravaneras. .

In addition, he dismissed as “fundamental” the need for health workers, personnel who work with the elderly and the security forces and bodies to access this preventive resource in order to avoid contagion of the disease among these groups.

Manuel Jesús Borda, a 67-year-old patient who works in a center for the elderly, was one of the first users who received the vaccine yesterday. “It is important that all of us who work with older people get vaccinated. In my case, I’ve been doing it since I was 40 years old and it has always been very good for me ”, the professional valued.

For Elisa de Aragón, on the other hand, a nursing assistant at the aforementioned capital health center, yesterday was the first time she had access to the medicine. “We are living in exceptional circumstances and now, more than ever, it is essential that all health workers get vaccinated. In this way, we will avoid the contagion of the flu and confuse the symptoms with that of the new coronavirus ”, he expressed forcefully. “This will also stop the collapse of the system,” added the assistant.

Another of the first citizens to participate in this new campaign against the pathogen was Nicanor Aguiar. “I am 74 years old and I have been getting the vaccine for many years. People like me shouldn’t hesitate to wear it because we are at high risk. Covid-19 continues to circulate and if it is combined with the flu, it can be more dangerous ”, emphasized the patient.

And it is that the vaccine confers protection against influenza that reaches an efficiency rate that ranges between 70 and 90%. To receive the treatment, it is necessary to request an appointment by calling 012, or by calling 922-470-012 and 928-301-012.

The Canary Islands Sentinel Network (RCC) confirmed last season a total of 250 cases linked to the virus that required hospitalization, of which 86 were treated in the Intensive Care Unit. In addition, 36 deaths were reported, with an average age of 69 years. In the image above, Dr. Virginia Cabrera, at the moment she receives the flu vaccine. On these lines, other patients access the medicine in a health center in Tenerife. Health workers remind the population at risk of the importance of resorting to this antidote, in order to prevent infections, co-infection with Covid-19 and confuse the symptoms. |