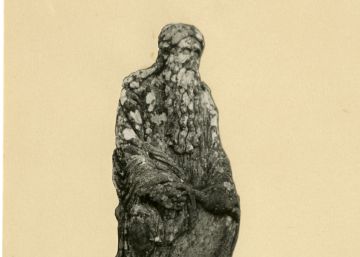 Fermín Bouza Brey y Trillo, judge of Santiago de Compostela, writes on July 3, 1943 a letter to Blas Taracena and Aguirre, director of the National Archaeological Museum (MAN) to urgently offer you a top archeological material, "Beautiful pieces of Romanesque sculpture." He was only an intermediary; the statues belonged to a good friend, Santiago Puga Sarmiento, count of Ximonde. The offer: five master figures of Galician granite, from the Pórtico de la Gloria in the cathedral of Santiago de Compostela, for 100,000 pesetas. The judge seemed a price "very affordable", "more, if they are clearly Master Mateo, how are you." The lot had been in the Ximonde family for "over a hundred years," but the descendant needed money. And Bouza whipped the director; He had received, he said, offers from "Catalan merchants."

This accompanied his first letter with several photographs to underline the importance of the sale. The statues of Master Mateo had been torn from the cathedral in 1520 to install two new, wider doors. They were in the gardens of Fonseca until they were transferred to the Ximonde family's pazo, built at the end of the 18th century in San Miguel de Sarandón (A Coruña). Three of them were deposited in 1909 in the diocesan museum of Santiago de Compostela. The other two, who remained in the pazo, are the same that mysteriously passed in the mid-fifties at the hands of Franco, after a visit from the east to the city. For his property he maintains a lawsuit with the descendants of the dictator The City of Santiago, which in 1948, after the failed sale attempt to the MAN, acquired them for 60,000 pesetas.

The Archeologist never bought those pieces. Five years and 15 letters passed before the sale failed due to lack of funds. The correspondence rests in the museum's archive, and has remained unpublished until now. It shows the impunity of the traffic of artistic heritage during the Franco regime. EL PAÍS has had access to this documentation, found by Harvard historian Francisco Prado-Vilar.

"Anyway," writes the judge in a second letter, "you will see that the occasion must be seized, that when radishes pass you have to buy them and that very similar pieces hardly come to the market." The owner insisted on appearing before Taracena, a renowned Spanish archaeologist who in 1937 made an abrupt ideological trip from the Republic to Franco to become, in 1939, the director of the MAN, as a citizen committed to "the artistic heritage of the Spanish State." That is why he proposed the purchase to the museum rather than the supposed "Catalan merchants". Bouza also crossed the Francoist purification to return to exercise: expelled from the judicial career in 1937 and disqualified to practice law, accused of a Mason, Galician - he was the author of the hymn of the youth organization of the Galician Party - and disaffection of the National Movement, in 1939 he proved his loyalty to Franco and was rehabilitated.

Taracena wanted to buy those "exceptional and well-preserved pieces, which would happily complete the series of Romanesque sculpture in this museum." The Board of Trustees approved and the Marquis de Lozoya, general director of Fine Arts, also agreed. The budgets for the purchase of works, committed until the beginning of 1948, failed.

In view of this lack of funds, the Count of Ximonde launched a new offer: 70,000 pesetas for two of the five portico sculptures, which rested in his pazo and would end up in Franco's hands. The Board of Trustees saw the price very high; if they used to sell five per 100,000, it was too much 70,000 pesetas for two of them, "and not the best". Taracena replied that they would not pay more than 50,000.

Faced with this fruitless tug of war, the judge tried for the last time. He tried to convince the director to buy the entire lot. To which he responded with the Heritage Act of 1933: the MAN could not acquire the three that were in the diocesan museum of Santiago, being objects deposited in entities belonging to the Ministry of National Education.

To avoid this problem, Taracena invites the owner in another of the letters to get them out of there and to send the five to Madrid, while guaranteeing that the transfer by train will be borne by the MAN. At the end of July 1947 everything was ready for sale, but it did not set. A few months later the two statues - which ended up in the hands of the Franks - were bought by the City Council of Santiago. Two others were acquired in 1957 by the Pontevedra Museum. And the fifth ended in a private collection.