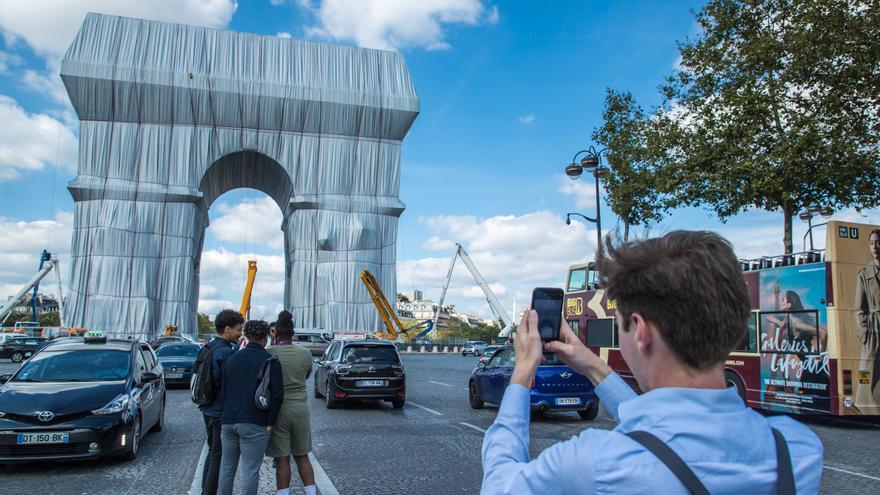 Excited and cheerful, the nephew of the Bulgarian artist Christo, Vladimir Yavacheff, presented this Thursday with his team and the French authorities the Arch of Triumph packed, the dream come true of his uncle, who died in 2020 and whose artistic legacy will continue with projects that want to adapt to the problems of the 21st century.

“I hope you are satisfied with the work we have done and that wherever you are you will give us your smile,” said Yavacheff during the press conference that preceded the inauguration of the work, which the French president will do this Thursday. Emmanuel macron.

Yavacheff, director of the assembly, insisted that despite the absence of his uncle, his team has only executed a project that Christo had planned to the millimeter.

“He had everything prepared, every detail and visual aspect. We have only followed your instructions“, he added, recalling that in October 2019 Christo had selected in situ and from the top of the monument the fabric that now surrounds it.

It is a silver recyclable polypropylene fabric, of which 25,000 square meters have been used, and three kilometers of red ribbon of the same material, which hides the famous Arc de Triomphe.

“The choice of fabric is totally aesthetic. We were looking for a structure, a shine, and this fabric, with its blue lining, gives a glow that is barely visible. When you look at it, it even seems silky despite the fact that the fabric is very hard and strong when you wear it. you get closer, “Yavacheff explained.

A worker laying down the tarp. EFE

After this intervention, the assembly team defended the sustainability of the fabric, which will then be subjected to an industrial recycling process, just like the red tape.

The choice of fabric and the concept itself of the work has not been without controversy, which explains why the group has insisted so much on defending its total recycling capacity.

Last Saturday, the architect and friend of Christo Carlo Ratti asked in a column in Le Monde terminate the project for environmental reasons, recalling that the fashion industry is responsible for 10% of global carbon dioxide emissions, and called for an end to “packaging aesthetics and waste”.

“The work belongs to whoever sees it”

Another of the most striking points of this installation, open to the public from September 18 to October 3, is that It will involve the pedestrianization of the gigantic roundabout that surrounds the monument, one of the busiest areas in Paris, during the three event weekends.

“Being able to walk to the foot of the Arc de Triomphe is going to be something extraordinary“defended the mayor of the capital, Anne Hidalgo, who has made the restriction of traffic in her city one of her workhorses.

“I think Christo and Jeanne-Claude (his wife and partner, who died in 2009) are immense artists and pioneers, they had a vision. I think they would have really liked to see this modern, 21st century image of the climate challenge,” he added the socialist.

The reappropriation of the monument and the intention to awaken new feelings in the viewer were some of Christo’s motivations, who considered that “the work belongs to whoever sees it”.

The meeting with the press was attended by some of the 19 high-altitude technicians who have participated in the installation of the fabric, the engineers who manufactured it, as well as the Minister of Culture, Roselyne Bachelot, and the former Minister of Culture Jack Lang, behind the Pont Neuf packaging in the 80s.

Total, the execution of the work has taken five years, an extraordinary record in the artist’s career, who waited more than twenty years to be able to pack the German Parliament, in 1994, and a decade in the case of the Parisian bridge.

But since Christo began to think about wrapping the Arc de Triomphe, 60 years have passed. The drawings made at that time, some of them auctioned in the coming days at Sotheby’s, will be used to finance the project, which has cost a total of 14 million euros.

The funds, totally private, will not go to the preservation of the Arch, an emblematic place of French patriotic memory where the tomb of the unknown soldier is found, a symbol of those who died in the First World War.

However, the Center for National Monuments does hope to profit from the sale of images and souvenirs of the ephemeral installation that it will now offer to its public.