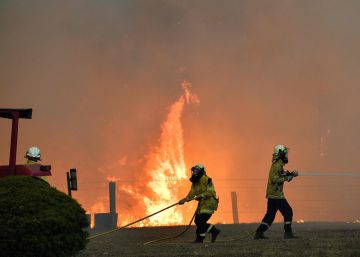 The images arrived from Australia last week are terrifying: walls of flames, skies dyed red, residents crowded on the beaches, trying to escape from hell. Forest fires have been so intense that they have generated “swirls of fire” with enough power to dump heavy trucks. The problem is that the summer of Australian fires is but the last of the chain of catastrophic meteorological events that occurred last year: flooding in the American Midwest, a heat wave in India that raised temperatures to 50 degrees, another heat wave that caused unusual temperatures in much of Europe.

And all these catastrophes are related to climate change. Notice that I have said “related to,” not “caused by,” climate change. It is a distinction that has baffled many over the years. Any specific meteorological event has multiple causes, and that is one of the reasons why the media avoided mentioning the possible influence of climate change on natural disasters. However, in recent years, climate experts have tried to make their way through all this confusion through the “attribution of extreme events”, which focuses on the odds: it cannot necessarily be said that climate change has caused a heat wave concrete, but you can ask how much global warming has influenced the likelihood of such a heat wave. And the answer is, in general, that much: climate change makes extreme weather events much more likely.

And although there is a huge randomness in the meteorological results, that randomness effectively makes climate change much more damaging in its early stages than most people believe. If we maintain our current trajectory, all of Florida will end up being swallowed by the sea, but long before that happens, the rise in sea level will make cyclonic storm surges a common occurrence. Much of India will become uninhabitable, but heat waves and deadly droughts will take many lives before reaching that point.

Let’s put it this way: although generations will pass before the consequences of climate change are fully manifested, many temporary and localized disasters will take place along the way. The apocalypse will become the new normal, and it is something that is happening before our eyes. The big question is whether the proliferation of climate-related disasters will end up being enough to overcome opposition to the action.

There are some hopeful signs. One is that the media are much more willing to talk about the influence of climate change on weather events. Not long ago it was very normal to read articles about heat waves, floods and droughts that seemed to make great efforts not to mention climate change. I have a feeling that reporters and editorial leaders have finally overcome that blockade. Public opinion also seems to be paying attention, and the concern about climate change has increased considerably in recent years.

Environmental policy is the worst Trump is doing to the world. And voters should know

The bad news is that this growing awareness of climate change is taking place mainly among Democrats; the Republican base for the most part remains impassive.

And the anti-ecologist extremism of conservative politicians has become, if possible, even more intense as their position becomes intellectually unsustainable. The right used to pretend that there was intense controversy among scientists regarding the reality of global warming and its causes. Now Republicans, and the Trump administration in particular, have become directly hostile to science in general. Are scientists not effectively part of the deep state?

Moreover, this is not just an American problem. Even while Australia burns, its current government is reaffirming its commitment to coal and threatens to turn boycotts into environmentally destructive companies. The sad irony of the current situation is that anti-ecology becomes more extreme precisely now that the prospects for decisive action should be better than ever. On the one hand, the dangers of climate change are no longer predictions about the future: we can see the damage now, even if it is only a small tasting of the horrors that await us. On the other hand, drastic reductions in greenhouse gas emissions now seem extraordinarily easy to achieve, at least economically. Specifically, so many technological advances in alternative energy have been achieved that the Trump administration is desperately trying to prop up the coal industry against solar and wind competition.

Will environmental policy influence the 2020 elections? Democrats mostly seem unwilling to make it an important issue, and I understand why: historically, the threat posed by the environmental policy of the right seemed abstract, distant and difficult to sustain compared to, say, attempts Republicans dismantle the Obama health program. But it is possible that the wave of weather-related catastrophes is changing the political calculus. I am not an expert in election campaigns, but it seems to me that campaigns could gain ground with ads that show recent fires and floods and point out that Donald Trump and his friends do everything they can to create more disasters of this kind. Because the truth is that environmental policy is the worst Trump is doing to the United States and the world. And voters should know.

Tags: apocalypse, be, do, environmental, must, new, normal, politics, to be, to know, Trump, turn into, voter, World, worst