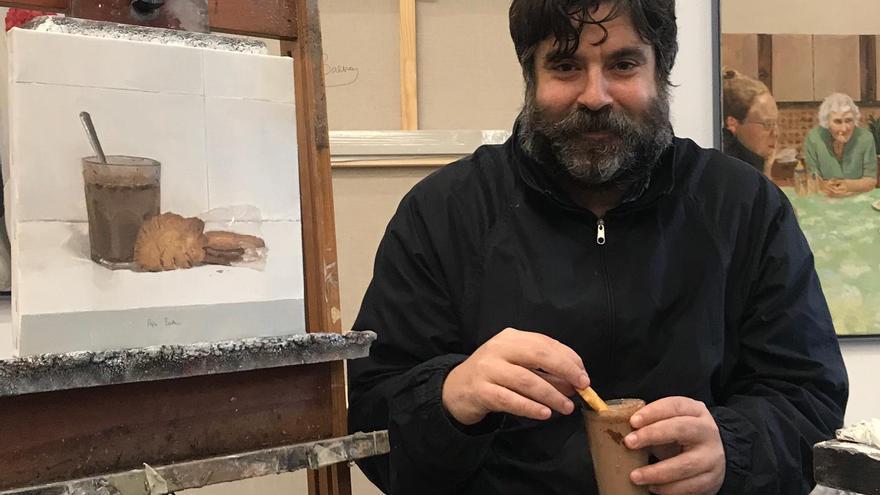 It's not cold, it's a supermarket. Pure landscaping. At the end of the 19th century, painters took their easels out into the open air to enjoy the friendly vision of nature, but in the 21st century, the artist who paints reality goes to the supermarket. And there he finds the beauty in the barcode sticker, in the glitter on the plastic that wraps the skinned rabbit, and in the Styrofoam tray. It is the landscape of our days, but also the portrait because there is no better witness of what we are: deformed meat of a plasticized animal, ready to pay and devour. And the brushstroke, without pretensions of gravity, without a drop of solemnity, goes and recreates itself in all those effects produced by the industrialization of what humanity of the new millennium puts into its mouth. The truth is not pretty. The truth has something monstrous like supermarkets or plastic. It can scare you before feeding. But without dramatizing...

in 1972 the painter Antonio Lopez She would order a rabbit from the local butcher, take it home, take it out of the paper it had been wrapped in, and place it on a Duralex glass bowl on her kitchen table. And so he presented the revision of the Agnus Dei, which Francisco de Zurbarán painted in 1640 and which can be seen in the Prado Museum, at the height of Baroque solemnity, with a dark background and a gray table as a stage where a merino lamb about eight months old is displayed. It seems alive, but who knows. Its legs are tied with a string and it stands in a sacrificial attitude.

When Antonio López (Tomelloso, 1936) picks up the baroque witness fifty years ago and paints that skinned rabbit on the panel, he is taking the first steps in his career towards a more intimate realism, but without giving up drama. When Pepe Baena Nieto (Cádiz, 1979) paints the plastic rabbit in 2017, we compare and understand how far Pepe's ironic gaze is from that grandiloquent attitude of painting. "I like my still lifes to be from the 21st century," concludes the Cádiz-born painter. Like those dinosaur cookies with colacao.

Something has happened to that still life or landscape or portrait. Whatever. It has struck a chord with the public. A few days ago Pepe shared it on his networks and the oil snack paralyzed —for a second— the internet. "It sold out in less than two hours," he says. It's hard for him to talk about money, he doesn't like it. This view that has gone around Twitter in 80 seconds cost its buyer 700 euros. The largest ones are sold for 5,000 euros. He thinks that this scene has exploded because of what a painter friend told him, tenderness. "It's a bit of that. There are motifs in my painting that recall the memory of the rest," says Pepe Baena Nieto. It also happened with a similar scene with a coffee and a cake from Inés Rosales. The brand of aniseed delight called him and bought the painting. In another he has placed a cupcake, also churros and even an open package of cookies, from which the red strip hangs.

"Perfection does not attract my attention. Although it is important, technique is not everything," says the realist painter, who rejects photographic realism. "I like painters who don't copy reality, like Cezanne." And that can be seen in his material: no continuous, soft and smug brushstrokes. He prefers that the painting be seen, that the artifice be seen. Pepe does not want to hide art or be confused with reality. That is why the brushstroke does not disappear, that is why his maximum reference is Velázquez. The painter who goes down to the market and blinds himself with red mullets, sardines, moray eels, dogfish, pijotas, fried scorpion fish (before and after being devoured), leaves the stain without hiding it. His is an autobiographical painting without complexes. One of his most successful prints is False alarm, in which an adult checks that the child's diaper is clean.

Does not like pose reality does not compose. Baena Nieto's vision arises from chance, from the morsels of reality that he encounters and photographs with his smartphone. Use the mobile, yes. Neither guilt nor sin. He has nothing against his mobile or against photography, he uses the screen to frame and steal an instant from everyday life. "For me the truth is what I see and what I live. I don't like to retouch the scenes, nor compose them. Nor accommodate them. I need spontaneity when I portray my family. If they posed for me, my children would come out stiff", explains the artist from Cadiz.

We have already said that Pepe does not exaggerate the misfortunes, nor does he dramatize the ravages of capitalist progress. Just stand and watch. It's cute, it's ironic. "You can tell I'm from Cádiz," he repeats proudly. He comes out of street chirigotas for Carnival. Enthroning a coffee with churros is not so Manchego. "In my painting there is humor because I am like that, a happy person," he says. In this he also differs from the master Antonio López. With the last of the Madrid royalists He has had a couple of courses: "With Antonio you don't learn to paint because he is attending to his students and he doesn't paint. You learn painting by listening to him," he says. In both courses he has told him the same thing, that he likes that his subject be his life, that he persevere there.

This summer he won the Antonio López García de Tomelloso Prize, and on the jury was, of course, Antonio López, the nephew of the painter who bears the name of the award. Pepe says that the painter of Madrid's Gran Vía called him to inform him of the jury's decision and told him "that he had been moved by the painting." The protagonist of the painting in question is Pepe's son, he has a bag of crisps in his hands and is sitting on a giant, patterned sofa, with a perspective similar to that used by the painter from La Mancha. Nor does speed unite them: Pepe doesn't get stuck in his paintings, if they don't come out the first time, he erases and starts again. If things go the first time, he says, they have more life. He admits that he prefers to leave the views less done.

In the views and streets of Pepe there are no great thoroughfares, no famous streets, no historic buildings. His landscapes are humble, of references without recognition or mythomania. They are the outskirts of emptied Spain, where, like López's, there are no people present either. But Pepe does dedicate himself to portraiture. Not only does he take portraits of his family and that of his Italian wife by surprise, he also does it on request. Now he is with that of a former Minister of Justice who prefers not to reveal it because it has not been made public yet. It will go to the gallery of ministers of the Ministry. "They are going to pay me more, but I am suffering a lot," he says before saying goodbye.