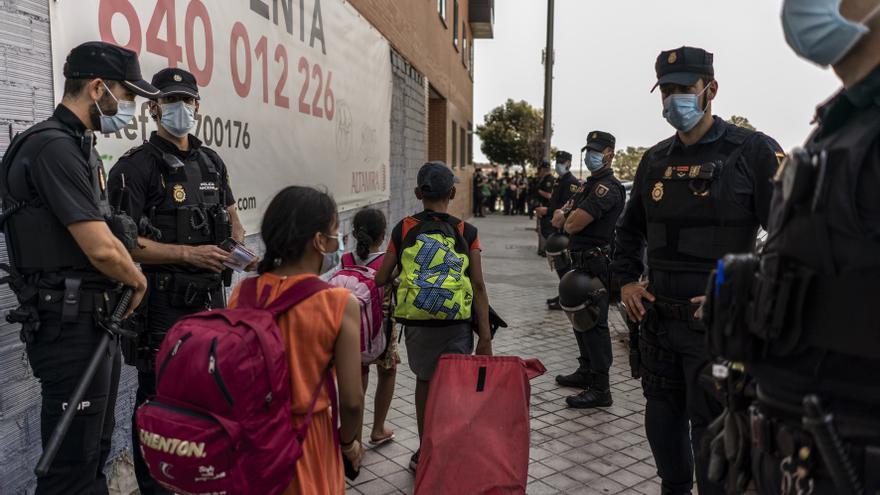 The national police executed this Wednesday the eviction of Cruz Rey, her husband and their four minor grandchildren, ordered by the court of first instance No. 6 of Madrid. It happened in Vallecas, in some new blocks attached to the M-40 motorway, around midday.

The minors, two girls and two boys between 9 and 16 years old, left the urbanization before their grandmother loaded with several backpacks, a hamster cage, scared and crying. Minutes earlier, representatives of the Platform for People Affected by Mortgages, the Tenant Union and several left-wing parties —ERC, Bildu, Compromís, Más País, BNG and the CUP— asked Congress for a moratorium on the current government anti-eviction decree , approved during the pandemic and that ends on August 9.

With the data in hand it can be stated that that decree has not worked. In the first quarter of 2021 there were more evictions for rent than in the same period of 2020 although less than in 2019. In recent years, evictions for rent from January to March were between 9,000 and 10,000. In 2021 there were 7,862. “Although the decree is insufficient, in some cases it has prevented eviction,” says Lucía Delgado, PAH spokesperson. “That is why we ask for a definitive moratorium and that banks and funds be forced to make social rents.”

Taking into account all the launches, both for rent and for mortgages, that were not executed in 2020 due to the pandemic, the organizations anticipate a real barrage next fall. “It’s going to be scary. We’re here because we can’t allow it,” adds Delgado.

Sources from the Ministry of Transport advance that they are working on a new decree with measures on evictions. This decree will replace that of the pandemic and will include the measures that should go into the Housing Law, on which the two government parties have not yet reached an agreement. Neither the PAH nor the Tenants Union know its contents. Unidos Podemos asks that it include the suspension of evictions for vulnerable families as long as there is no alternative other than housing, that the court has to request a mandatory report from social services and increase the vulnerability criteria.

That of Cruz, her husband and the children is one of those cases in which the Executive’s measures have been of no use. There are many more. Some, like that of Segundo in Barcelona, they ended in suicide.

Cruz is in charge of her grandchildren because her daughter passed away years ago. They lived in an apartment in Puente de Vallecas that stopped paying when the pandemic hit and she and her husband were out of work. They had been applicants for social housing for a long time, but it had not yet been granted. They moved to the apartment that was the object of the eviction, five kilometers to the south, last January. His other daughter, Marily Alejandra, lived there until then. She left when she got an internship job in Guadalajara.

According to sources from the PAH who have followed the process and tried to stop the launch, the owner (Liberbank) sold the apartment with Marily inside. With the coronavirus, she stopped paying and the new owner, passed her the rent receipts until he sued her for non-payment. As she found work and shelter elsewhere, she did not fight the case but left the apartment to her mother and nephews.

The new owner and plaintiff is Global Tarasca, a real estate company in which Liberbank has a small stake (3%) and whose majority shareholder is Candra, which in turn belongs to a fund based in Ireland. Altamira, an asset manager, is a proxy for Global Tarasca. Sources close to Liberbank assure that the asset is no longer theirs, although the housing groups indicate that a representative of the bank went to the judicial commission prior to the eviction. Global Tarasca has told elDiario.es that it has nothing to comment on the case.

“The court has said: neither vulnerability is proven nor does this woman live here, because it took her time to register,” says Diego Sanz, spokesman for the PAH in Vallecas. The group also denounces the role of social services, the administration in charge of issuing vulnerability reports. Technically, vulnerable people – with a certain income limit – cannot be evicted in any case until August 9, but they must prove said vulnerability. Cruz and the children had an outdated report from when they lived in Puente de Vallecas. According to Social Services sources, a day before the eviction, Cruz went to the center asking for a new report that included a disability situation. Social Services transmitted to him “the impossibility of receiving new reports, because the launch date was resolved without the possibility of postponement.”

The government expanded the conditions of its anti-eviction decree in December to accommodate those who did not have a rental agreement. Cruz’s case fits into this assumption: without title, economically vulnerable, with minors in his care and in the apartment of an owner who most likely has more than ten homes (he has a net worth of 12 million euros, according to his latest accounts) .

However, this has not served for the judge to decide to stop him. Moreover, in the car he mentions the “express warning” that “the launch will not be suspended again”, because this was the third attempt. The groups for housing have been pointing out the judges who order the evictions for some time, ensuring that on many occasions they do not comply with the provisions of the decrees.

Sources from the Madrid Social Services indicate that the family “is being cared for” and that “they have been offered an alternative accommodation benefit, which they apparently have rejected. The Social Samur has also been activated, as in all cases of launches. “.

“The alternative was a temporary shelter”, clarifies Sanz. “The family has rejected it. They have also rejected the Plaza del Samur because it is temporary, they do not tell you where, or how long, or if the whole family can go together. The presence of the Social Samur facilitates eviction because the judge understands that there is an alternative “.

Upon leaving, Cruz told the media that they will be staying at a friend’s house and has asked the owner to think about the children. “They do not have a father, they do not have a mother, I am the grandmother and I take care of them. I ask you to stop this eviction,” he said in a video. “Here are the children watching this show, but you don’t care about other people’s pain or destroying families.”