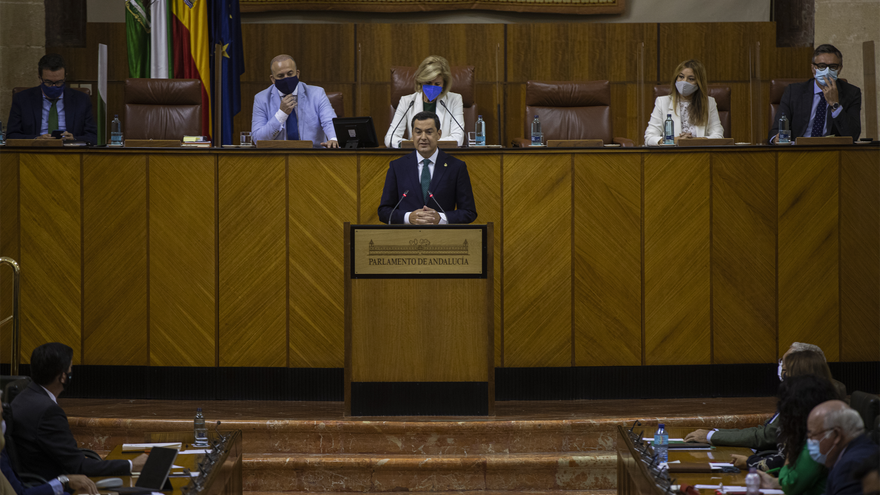 The president of the Junta de Andalucía, Juan Manuel Moreno, has taken the lectern in the Andalusian Parliament to expose the lines of action with which it wants to respond to the “enormous challenges” to get out of the health and socioeconomic crisis derived from the crisis. With a moderate speech, within the Debate on the State of the Community, has reviewed the consequences of the pandemic and has shown its “essential commitment” to make reforms in the face of the obstacles facing the region. .

The president has announced that the Andalusian Budgets for 2021 will amount to more than 40,000 million euros. “The largest budget in the history of Andalusia. The largest budget of all the Autonomous Communities of Spain “, Moreno said. Faced with the coronavirus -” the worst enemy we have ever had “- Moreno seeks a” guarantee of trust, stability and credibility for Andalusia “and would like to” do it together For this reason, after the announcement of the new accounts for the next academic year, he has requested the support of all the political parties of the chamber to “make an effort to bring a united voice on the distribution of European funds.

Moreno wants to reach the Conference of Autonomous Presidents, Monday, October 26, with the support of the Andalusian chamber. And for this he has chosen a conciliatory tone in his speech. It has requested for Andalusia 23,000 million euros of the 72,000 million, 32%, that Spain will receive a lost fund from the European Union. For this he clings to the criteria of population, unemployment rate and gross domestic product (GDP). For the Andalusian president it would be “incomprehensible” that the opposition did not defend these proposals to overcome the “coronacrisis”, as he has stressed from the rostrum. “Now we cannot miss the historic opportunity to unanimously defend vital resources for our land.” With this proposal, he wanted to put the opposition between a rock and a hard place, especially the PSOE, recalling that in 2018 Moreno supported the request for Susana diaz to claim 4,000 million euros from the government of Mariano Rajoy. Thus, if the Socialists vote in favor (unlikely), the leader of the Andalusian PP would mark himself somewhat politically in the chapter on “unity”. If they vote against, the government parties will use it for the next two years as an argument to wear down Diaz’s PSOE

The premises of the Coalition Government of PP and Cs are moderation, dialogue and institutional loyalty. The counselor of the Presidency, Public Administration and Interior and Spokesperson of the Junta de Andalucía, Elijah BendodoHe had been urging consensus by the opposition for days. He already defended a “common position for the distribution of funds.” It is the recipe of the Andalusian Executive to “reduce political tension and agree on the pandemic.” “Andalusia is above the political acronyms,” added Bendodo who lends himself to dialogue “with both Vox and Podemos.”

The Andalusian economy closed 2019 with a 2.1% rise in Gross Domestic Product (GDP). According to the numbers of the Junta de Andalucía, this figure is above the Spanish average and that of the euro zone. In terms of employment, in the previous year this average was also exceeded and Andalusia closed the year with the lowest unemployment rate since 2008.

“The covid-19 has changed everything”, the president stressed at the beginning of his speech. A hit of the national GDP of 17.8% is expected, so the outlook in Andalusia is darkened by the health crisis. “The bitter face of the loss of employment, the closed business, the companies in losses and the sectors worn out as a result of the paralysis of the economy hits us hard,” said Moreno.

In a speech that lasted almost an hour and a half, the Andalusian president presented the plan “Andalusia on the Move “, a project that seeks to reactivate the economy and generate employment. To promote this initiative, the government does not set limits “neither in the actions nor in the funds available.” The planned disbursement is around 3,500 million euros until 2023, an amount that would be increased with the money that must reach the community from funds from both the central government and the European Union.

The Andalusian Executive plans to allocate 440 million to Health Infrastructures, 310 to Education and Sports. Two other items have also been announced, 875 for Transportation and Communications and 940 for Hydraulic Works. “The government wants to reactivate the economy and generate employment through modernization and reforms,” ​​Moreno has expressed. “Andalusia on the Move “ Public-private collaboration is promoted that “will mobilize at least 900 million euros in the service of economic recovery”.

Among other measures, Moreno has advanced a line of subsidies for facilitate permanent employment among youth and women, as well as a Reincorporation to Employment Plan Aimed at unemployed people belonging to the sectors most affected by the pandemic: self-employed, tourism, hospitality or culture.

Moreno has also announced that in 2021 Taxes will not be raised in Andalusia and the reduction of the autonomous section of personal income tax will be maintained that was already planned. This decision is based, according to the leader of the Andalusian Government, in the increase of the collection of the rent in 650 million euros.

In his appearance, Moreno has referred to different proposals to support the agro-industrial sector and the aerospace industry. He has also made mention of future R & D & i investment. But without a doubt, one of the president’s most striking bets has been “the Green Revolution” with which he intends to promote a “real and effective change towards sustainability in Andalusia”. The first movement has already been communicated: the Algarrobico will be demolished.

Juan Manuel Moreno understands that all these measures for the recovery of Andalusia are subject to the availability of the European Reconstruction Funds. “I know that it is difficult to assume it, I know how much it costs us sometimes to modify our positions to accommodate the adversary, but let’s be humble and try it”, he finished.

The president of the Junta de Andalucía knows that his best letter of introduction is to get away from the confrontation. He wants to go to Madrid next Monday to “strengthen Andalusia’s position” although for this he needs a positive response from the opposition, which is not expected in view of his first assessments.

“Triumphalist and out of reality”. This is how the socialist spokesman has described, José Gregorio Fiscal, the speech of the President of the Junta de Andalucía, Juan Manuel Moreno. The Socialists complain that they have not delved into the “main problems of Andalusians: health and education”, for which they consider Moreno’s intervention as “a deception of the citizens.”

For her part, the Adelante Andalucía spokeswoman, Angela Aguilera, has been “concerned” by a “self-indulgent” speech that presents the Andalusian Executive in a “parallel reality”. “Talking about consensus is a very comfortable position, but we are not told what it is for,” the spokeswoman added. He has also warned that the Andalusian Government will not have his backing if his measures take precedence “over brick, speculation or green capitalism.”

“He has not told us anything new,” said the VOX spokesman, Alejandro Hernandez. Since their formation they have regretted that Moreno, in a “flat” speech, has not taken advantage of “a missed opportunity to explain where he wants to lead the community.” As expected, the spokesperson for Ciudadanos, Sergio Romero, has positively valued the intervention of the Chairman of the Board. The Andalusian coalition party has defended Moreno’s “loyalty and respect” towards the Andalusian Parliament. Romero has appealed to the “firm commitment” of the Executive to overcome the pandemic.

Animals will have a voice in the Madrid City Council