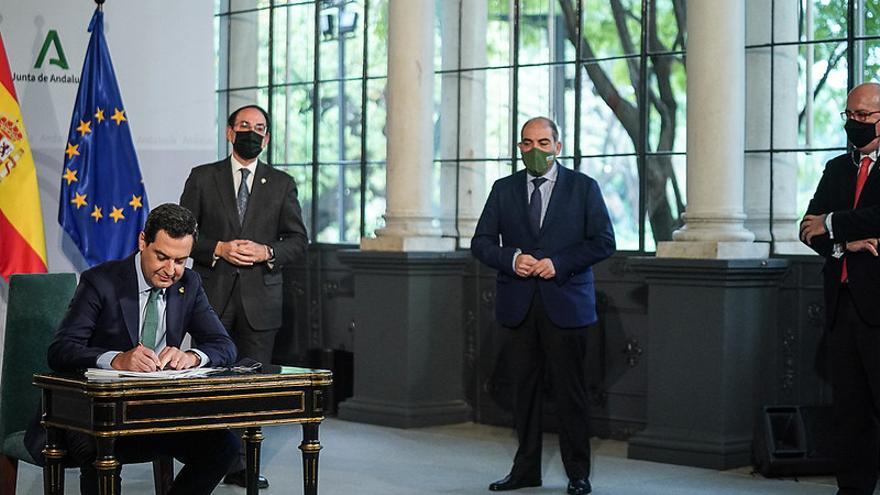 Last April, the president of the Junta de Andalucía, Juan Manuel Moreno, outlined an ambitious strategy to summon all political forces and social agents to join forces, commitment and proposals to face together the social and economic crisis caused by the pandemic. Moreno baptized it as the “great alliance for Andalusia” and, since then, that slogan has topped the lectern of the Andalusian government every time the president announces an important milestone in economic matters.

The great alliance for Andalusia reappeared this Monday in the solemn presentation of the support plan for small companies and the self-employed, an agreement of 667 million euros charged to the 2020 and 2021 budgets, signed by the Andalusian president and exclusively representatives of the business world. The class unions, CCOO and UGT, have for the first time been excluded from the negotiation of an agreement that seeks to alleviate the suffocation of the sectors most affected by business closures and, consequently, the pact initialed this Monday does not include claims union in labor matters. “There are no counterparts or commitments from the business community to their workers, the maintenance of jobs is not even guaranteed in those companies that are going to receive direct aid from the Board, nor do we know if proportionality criteria have been taken into account and social return of these public resources “, explain union sources. Present at the signing of the agreement were the Minister of Employment, Rocío Blanco, and the Minister of Economy, Rogelio Velasco.

CCOO and UGT, essential actors in the social dialogue table that has preserved decent minimum working conditions in each economic impulse approved by the Andalusian governments, have this time been taken from the photo of that “great alliance for Andalusia” that Moreno proposed. Four months ago, the Government, employers and unions did appear together in the same photo, when signing the Andalusian Economic Reactivation Agreement, an image that the President of the Board celebrated as a “success” of “dialogue and effort for social consensus “. Now, trade union organizations denounce that this pact “hangs by a thread, as it does not have a concrete development of the various measures included in it.” “The Andalusian Government has chosen in these months to skip the representation of the working people of Andalusia, in a senseless race against the Government of Spain,” the CCOO and UGT addresses have denounced in a joint statement.

The pact signed exclusively with the Andalusian business community has brought the collateral effect of opening a war between the unions and the Moreno Executive, which sees his carved image as a moderate and dialogue leader in danger. The fire occurs in full processing of the Autonomous Budgets for 2021, which this Wednesday face the debate to the whole in the Andalusian Parliament.

It is not the only scenario where the waters are shaken, just a week ago, the five large public health unions rebelled against the “unilateral” order of the Ministry of Health that freezed their breaks, vacations and permits to face the high hospital pressure that has caused the second wave of the pandemic. A norm that was not debated or negotiated at the Health sector table, and that the workers’ organizations were found directly published in the BOJA. The counselor of the branch, Jesús Aguirre, had to go out of his way to apologize to the sector and agreed to renegotiate the order (which emanates from a Royal Decree of the central Government), although to this day it is still in force, and the medical and nursing unions they maintain their calendar of mobilizations.

The Board plans to approve this Tuesday a first aid package that includes the support play for SMEs and entrepreneurs, which includes a line of grants endowed with 80 million euros aimed at 80,000 self-employed or self-employed workers. The CCOO leader, Nuria López, and her counterpart in UGT, Carmen Castilla, have already energetically ugly the Andalusian president who has cut off social dialogue, maintaining only negotiations with the employer, and bordering the unions. Sources from the regional executive maintain that “the labor part” of the economic crisis is already contemplated in the ERTEs regulated by the central government, which in Andalusia affect more than 85,000 workers in some 26,000 companies, according to data from the Ministry of Employment.

The absence of CCOO and UGT in the presentation of the agreement in San Telmo has not detracted from the act in which Moreno was accompanied by the president of the Confederation of Entrepreneurs of Andalusia, Javier González de Lara, the federation of Self-Employed organizations ( ATA), Lorenzo de Amor, and the president of the Andalusian Chambers of Commerce, Javier Sánchez Rojas, who have stressed that “this is the best agreement at the worst possible time.

The pact includes direct aid of around a thousand euros per affected until the extraordinary fund provided for by the Andalusian Executive is exhausted. The self-employed and self-employed who may benefit from these subsidies are those from the hospitality, commerce, taxi transport, hairdressing and trade fair sectors affected by the restrictions derived from the state of alarm due to the Covid-19 coronavirus pandemic for “Help to sustain its continuity”, avoiding its “permanent termination” and the consequent “job destruction”.