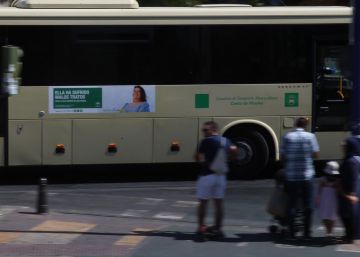 The Junta de Andalucía does not plan to withdraw the controversial campaign against gender violence -in whose slogan that expression is not used- despite repeated requests in that regard from feminist groups, victims, professionals and political parties, which in the last 48 hours has joined an initiative on Change.org which has already collected more than 2,000 signatures. The Minister of Equality, Rocío Ruiz, has defended the campaign, in which Models whose faces have already appeared in other commercials are presented as victims. The leader of Citizens alleges: "Many survivors have called us congratulating us on the campaign."

“The campaign does not correspond to the reality and life of a woman victim of violence. No woman is going to feel identified with the beautiful and arranged models that appear on the posters, because they have nothing to do with the daily life of a victim, ”explains Antonia Ábalos, a member of the newspaper Association Women Survivors of Gender Violence. The Government has already transferred to the president of the Board, Juan Manuel Moreno, his concern for the line of the initiative promoted by his Executive, and there are many professionals who have questioned their effectiveness in order to mobilize the victims, by focusing the message only in the importance of denouncing, beyond the convenience of showing happy women or that they are not true sufferers of sexist violence, as stated in the announcements. To these reproaches has been added a campaign on Change.org to suppress the publicity of the Board. Its promoter has criticized the talk of "mistreatment" towards women and not gender violence. "We believe it is unacceptable to announce a number of help against 'abuse' along with photographs of women smiling and happy," he says.

The Board insists that the happy and cheerful faces of the models that appear in the campaign comply with the provisions of the State Pact against Gender Violence and the own gender violence law of Andalusia, which states that the campaigns they must show examples of strong and brave women. ” "We seek to empower women with models of improvement," said Ruiz. "Once you go out and you are in the process of recovery, there is room for hope," says Ábalos, who has suffered sexist violence. “But sell the problem that way, do marketing of the survivors I find insensitive. The campaign should be modified in some way, ”he claims.

The counselor has insisted that the use of advertising models is part of “a common advertising license in all spots" "It is unfeasible to use real victims for a matter of common sense, confidentiality and protection of victims," ​​he said. Ruiz has ignored the fact that the television wedge recorded by the Board started with the following message: "Attention: the women who are going to see next have been victims of ill-treatment." Although she always uses the terms sexist and gender violence in her interventions, she also did not want to explain why the motto of the campaign promoted by her counseling refers only to abuse, another aspect of the campaign most criticized by the opposition, which understands that the terminological choice is a clear submission to Vox, something they deny from the counseling.

The Board emphasizes that the important thing is the victims. "All the energy we have to use to work to fight against the tragedy and scourge of the murder of women," said Ruiz, who has charged those who have criticized the campaign. "It seems immoral and irresponsible to use the tragedy of women politically," he said.

The counselor of Igualad has defended the importance of the Andalusian Institute of Women, against which Vox has recently charged. During the debate on budgets in the Andalusian Parliament, the far-right party asked to replace it with one against “domestic violence” and this week his spokesman in the regional Chamber, Alejandro Hernández, has proposed to “suppress” some activities of the IAM whose “public utility” has questioned. "Vox does not mark the political agenda of this counseling," Ruiz said. The leader of Citizens has assured that the general services of attention to the victims and the centers of attention to women will be reinforced. The counselor has defended the need to audit the IAM, a claim by the extreme right that has been admitted to parliamentary headquarters: "The audits will arrive, we are not opposed, because it is good to have controls in all agencies, as we are doing."