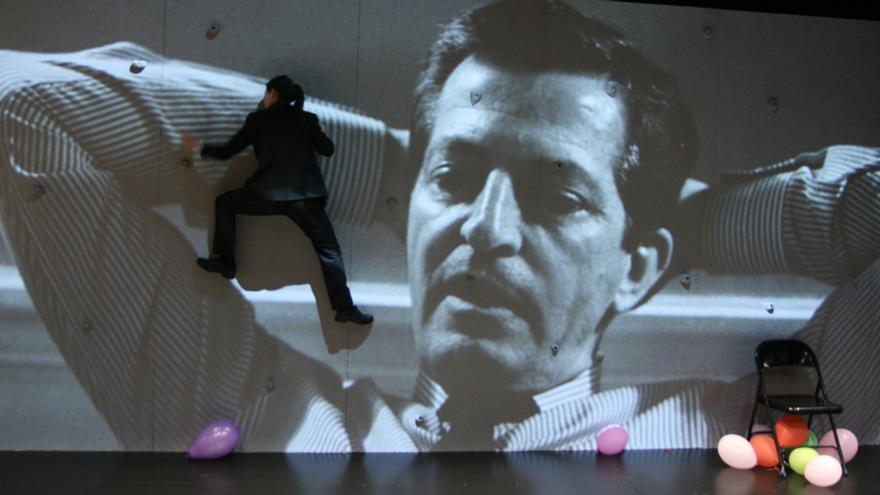 The writer Javier Cercas, the director of the play Àlex Rigola and the new director of the Teatro de la Abadía, playwright Juan Mayorgahave presented this Friday 23F. Anatomy of a momenta work that will premiere on February 23, thus coinciding with the anniversary of the military coup.

Rigola is addicted to theatrical challenges. Take as an example his audacity to stage the posthumous book by Roberto Bolaño, 2666. Now he has faced making the theatrical version of the book published by Javier Cercas in 2009, a detailed overview of everything that happened on that day, the day all eyes fell on the Congress of Deputies. "I was interested in the way in which Cercas starts from a small detail, from a frame and separates himself from it, taking distance and how, through his gaze and an exhaustive journalistic compilation, he unravels what happened on that day. and what that exciting period that we call democratic transition meant", explains Rigola.

In the play, Àlex Rigola has one of the great Catalan actors, Pep Cruz, and Eduald Font, Miranda Gas and Roser Vilasojana, actors who unravel that day whom Cercas likes to call "our assassination of Kennedy". "The 23F is the founding myth of Spanish democracy. Each Spaniard has his own version of what happened that day, everyone who is old knows where he was when it happened. It is what myths have, they are full of truths and lies And that is what I found when I approached the project, many lies that the book tries to remove", explained Cercas about this "novel without fiction", as he calls it.

Cercas also wanted to point out that, at the beginning, when Rigola proposed the theatrical adaptation, and even having already gone through the theatrical adaptation of another of his books (Soldiers of Salamis directed by Joan Ollé in 2007), the project seemed "crazy". "But I was especially excited because I think that one of the best things I've seen in the theater in recent years has come from the hand of Rigola. He has something that I think is fundamental in art: he always plays it. If you you play you can hit it, but it is essential that this risk exists", he added about this creator who has been working regularly at the Abbey for more than twenty years, recently with a challenging montage of Lorca's difficult work, The public.

Barcenas by Alberto San Juan Atocha the reverse of the light by Javier Durán on the murders of labor lawyers in 1977, or the gaze of the other by Chani Martín about the meetings between victims of ETA and prisoners of the terrorist group, are some examples of the roots in recent years of the documentary and political theater devised by the German Erwin Piscator at the beginning of the 20th century. "Sometimes, the best thing you can do is withdraw and give way to the narrated word. I would not have gotten into the genre of documentary theater, which I had never tackled, if it hadn't been for the look of Cercas and because I think there are certain micro-stories in the book that contained a very theatrical dramatic tension. The work focuses on narration, the actors narrate the events in the third person, sometimes it has overtones of film noir but friendship, love also arise... And in it its protagonists are emerging, Suárez, Carrillo, Sabino, King Juan Carlos himself", Rigola points out about this production for which he has made a faithful adaptation of the book. Adaptation that tries, on the one hand, to contain the complexity of 23F in an hour and twenty minutes and, on the other, to give the narration an oral, scenic treatment that can hook the public.

In the montage, yes, the touches of this stage director are not lacking: a king turned into a doll, party lights or scenes in which the actors celebrate dressed in colored pajamas. Even so, the piece is sober, video is not used, they are only supported by frames from the time and a sound file of a young Iñaki Gabilondo watching Alfonso Armada leave Congress. The important thing is the story, understanding everything that was at stake that day where so much history and so much testosterone converged. "Also understand why all the deputies, except three, hide in their seats, understand why the squares that day, the universities, were empty. Who defended democracy that day? What would we do in that situation? I probably, seeing to that army that only six years before was the one that carried out death sentences, I would also have hidden," he reflects.

Possibly, when Cercas published his book, the figure of the King was the most controversial, the monarch was not portrayed as a savior but rather as co-responsible for those soldiers rising up in his name. "In 2009 this book was read as anti-system and anti-monarchist, today it is read in the opposite way, as a justification for the actions of King Juan Carlos. Both readings are stupid, but they also denote what has changed this country. The figure of the King in the Spanish Transition, how, coming from Franco, he manages to establish the democracy that we have today, without violence, his performance in 23F... gave him enormous national and international prestige. Even Bosnian poets wrote poems to the King of Spain. completely shielded and caused the Spanish press not to do its job. That was a huge mistake. That shielding, as is evident today, has been bad for everyone, for democracy, for the King himself and for the Monarchy, "reflects Cercas . He rigola, at the end of the work, asks, on stage, if the king emeritus himself should pick up that glove that the transition continues to offer us today, that of resignation. "That is another of the themes of this work that interests me, seeing that time when everyone resigned in order to move forward and live together, something that does not exist today in such an extreme political panorama," Rigola reasons.

This has been the first official act attended by Juan Mayorga as the new director of the theatre, appointed a fortnight ago, and on which hovered the question of what direction this space will take which, since it was founded in 1995, has played a leading role in the future of the national theater. Juan Mayorga declined to make any assessment of his appointment and the new lines of programming that he wants to implement in the Abbey. "You are going to allow me not to respond today, I do not want to take away from the great work of Rigola and Cercas that arrives at the Abbey today," he said. "I am aware of the challenge, today I can only say that I am excited and that I will do everything possible so that people say: 'I want to go to the Abbey', that is what I would really like to achieve", explained a Mayorga who also did not want to answer whether, like the former directors of the Abbey, José Luis Gómez and Carlos Aladro, he will direct shows during his term. "We will look for action, emotion, poetry and thought. And yes, of course, we will be attentive to the new Spanish dramaturgy and the new scenic writings in Latin America", settled this playwright who has in the Chilean Marco Antonio de la Parra one of their teachers.

At the end of the presentation to the press of this show, Àlex Rigola was asked for any advice he could give Mayorga in his new journey. Rigola, in addition to being a theater director, has held relevant positions in cultural management such as the direction of the Teatro Lliure and the Teatros del Canal, from which he resigned after the referendum in Catalonia on October 1, 2017 with a text that said: "Just as the arrests of September 20 made me go to vote, the brutal violence exerted on Catalan citizens last Sunday, October 1, ordered by the same party that governs the Community of Madrid and the defense of these facts, make I have presented my resignation as artistic director of the Teatros del Canal to the Minister of Culture".

His message to Juan Mayorga was: "I advise you to be very open. If theater has something it is that it is movement and present. Now Juan needs time for analysis and reflection. When I joined the Lliure I also had no experience directing a theater and It was difficult for me to analyze and detect what had to be done. Juan has a life background that I did not have, that counts in his favor. I also advise him to know how to modify the paths that one marks out. One thing is theory and another is practice. You have to know how to adapt the path that one traces and at the same time attend to the artists and authors of the territory and cover the needs that are had both at the level of the neighborhood, the Community of Madrid and the State".