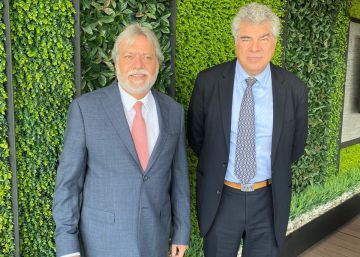 The board of directors of OHL valued the uncertainty generated by the Covid-19, as well as the political framework in Mexico, to rule out the merger with the Aztec construction company Caabsa, according to sources close to the negotiations. However, the brothers Luis and Mauricio Amodio, owners of the aforementioned Caabsa, do not cease in their efforts to enter OHL and pursue a package that grants them the role of first shareholder, according to financial sources.

The Villar Mir Group, owner of 33.3%, maintains contacts with these investors in order to open the door for them. But is no longer on the table a capital increase dedicated exclusively to new entrants. Villar Mir could part with more than 17% of OHL due to the condition of Mexicans to lead the capital.

With the integration plan (announced on February 4) already frustrated, he returned yesterday to the starting point of October, when the approach of the Mexicans was for direct entry into the capital, and then the integration plan emerged. The condition then was that the new participants did not exceed the 30% OHL threshold from which the takeover bid is mandatory. Thus, an OHL capital increase of 20% was designed, which would be exclusively covered by the Amodios, in addition to the sale of securities by Grupo Villar Mir.

In the new crisis scenario, the Amodio brothers would have access to a predictably smaller but relevant portion. The key is in the package that Juan Miguel Villar Mir be willing to sell after the 50% drop in OHL’s value so far this year.

The merger proposed in February also gave the Amodio family the role of reference shareholder of the resulting company, with a package of 31% and 35% of the capital. In this scenario, it also surpassed Grupo Villar Mir, whose participation of a third was diluted to 23%. The potential new benchmark participants were to contribute Caabsa’s assets and businesses, plus 50 million euros.

OHL sent a second note yesterday to the CNMV with the modification of the agenda of the shareholders’ meeting. The idea is that the council can launch extensions, now limiting itself to 20% of the capital. In the initial call this possibility was open up to 50%.

From OHL, it was argued that the new cap on the volume in which the company can recapitalize is due “to the volatility observed in the market and to the uncertainties generated among investors,” the statement quoted.

The board delegated in 2014 to the board the possibility of increasing capital by up to 50% (maximum allowed by the Capital Companies Act), which expired in 2019. In the renewal of this delegation, OHL has adjusted the maximum level of expansion to the aforementioned 20% in response to the fact that the Code of Good Governance also places a ceiling of 20% of capital on pre-emptive subscription rights.