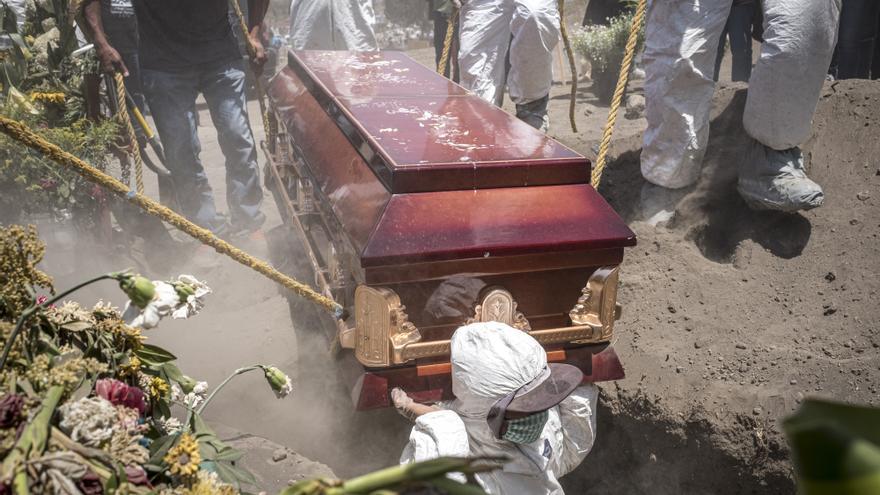 The COVID-19 pandemic on Tuesday surpassed the 47 million confirmed cases and the more than 1.2 million deaths worldwide. The end does not seem to be near: Europe has returned to strict confinements to contain a second wave that has rampaged especially on this continent, where the number of positives has been multiplied by four in just over a month. The tragedy of the coronavirus is already a key episode in history and, as such, requires a visual memory that does it justice.

This is what 24 photographers from Latin America and Spain have proposed with Pandemic. Glances of a tragedy, an altruistic project whose proceeds will go to help the relatives of photojournalists who died of COVID-19 while working. "Speaking with Ricardo García Villanova, we considered the possibility of collecting images of the pandemic to serve as a visual memory with the idea of ​​helping relatives of photographers who died during the coverage of the pandemic. That has not happened in Spain, but it did in areas such as Latin America, India, Bangladesh ... The list is very long, "explains photographer Gervasio Sánchez to elDiario.es.

The result will be a book of 350 photographs and more than 200 pages that seeks to reflect the views on the catastrophe on one side and the other of the Atlantic Ocean that will be published and produced in February 2021, once the campaign of crowdfunding.

In addition, another of the objectives of the material is to offer a vision away from the interference of possible intermediaries. What we see on its pages is what photographers consider to be the best witness to the pandemic, not a company or a communication group.

"One of the main problems with the coverage of this pandemic is that they have prevented photographers and journalists from entering the most sensitive areas: nursing homes, hospitals and funeral homes. I spoke to many doctors and they told me: 'We they have ordered that we do not let a single journalist pass. 'That is called censorship, "Sánchez denounces about obstacles that, according to him, occurred regardless of the government in charge. "It was an attempt by all administrations, whether it was the central state or the regional governments, to mask the impact that the pandemic was having," he adds.

The photojournalist points out that "it is not about showing the faces of the dead, but the real force that the virus is having." In fact, he points out that 350 photographs have arrived in this project and only one can see a deceased person in the open.

In fact, sometimes certain professionals decide not to show certain images because they consider that they do not contribute to the story or, as in the case of Sánchez, out of respect for the relatives of the deceased. "I have photographed people in residences who have died hours later and some have died in front of me. Those images I have not shown, because I did not want loved ones to see their dying relatives through photographs in the newspaper."

But there are tough scenes in the project, like the work done by Sandra Balsells in Barcelona's Raval, which tells us about how the pandemic is hitting the weakest sectors of Spanish society. Or that of Isabel Muñoz, who put the lens on the protagonists of the pandemic and, among them, those who have suffered in the first line the consequences of being overwhelmed and with hardly any resources: health personnel.

In the case of Gervasio Sánchez, one of his snapshots shows another pain derived from the pandemic: the impotence of being able to see and not being able to touch. In his image appears the director of a center for people with disabilities in Zaragoza waving through the glass to one of its residents, who was sick with COVID. "In this center of 250 residents, they had to prepare several areas: some for those who could possibly have coronavirus and other areas where people who had already tested positive were sheltered," says the photographer about one of the many scenes about the pandemic collected in this book and, consequently, also in our history.