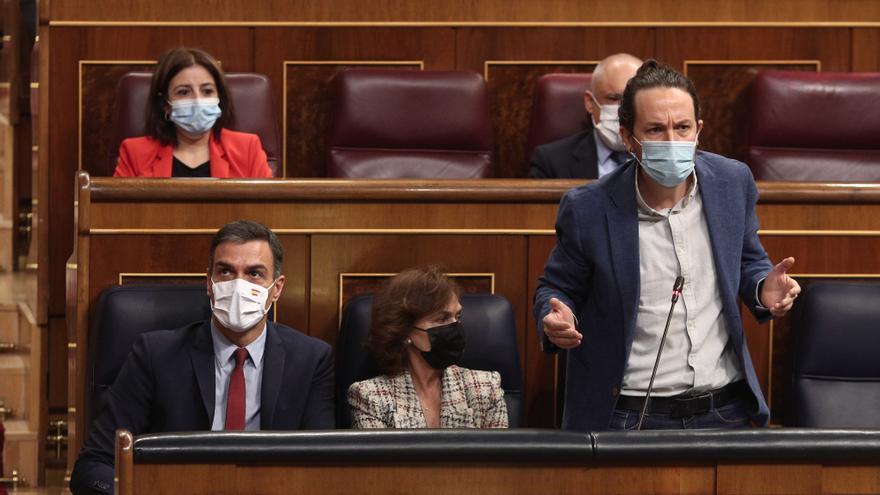 The approval of the budgets has reopened the debate on government alliances. While the PSOE affirms that any alliance that allows the accounts to be approved is valid, Pablo Iglesias rejects an alliance with Ciudadanos and asks for it with the left-wing parties. But what kind of alliance does Iglesias want? Is it a useful type of alliance to democratize the ’78 regime? The idea that I defend is that it is not, and that only through a reconfiguration of the current type of alliance between the UP and the rest of the left-wing forces in Congress can it serve to democratize it.

To explain what I mean by this we must differentiate between conjunctural and structural alliances. The conjunctural alliance is a weak agreement for the approval of a specific partial measure that is exhausted in itself. On the contrary, a structural alliance is the strong common commitment for the implementation of a specific global project of the State, in the material and the superstructural. We can say that, in the Congress of the current legislature, there are, on the one hand, temporary alliances between parties that change with each vote. But, on the other hand, there are three major structural alliances between parties that make up the three state projects in dispute, today, in the chamber.

First of all, the PP-Vox alliance carries a State project of pre-capitalist political regime with inter-territorial and social relations, inside, of savage violence. Why pre-capitalist? It is not enough to perceive surplus value to be an effective bourgeoisie. Historically, it has also corresponded to the bourgeoisie to be such to fulfill certain functions of liberal-bourgeois construction of society, the State, space and citizenship, without which the capitalist State could not have reproduced itself. The survival of this requires the overcoming of civil society by the State or, what is the same, the overcoming of the private individual by that of the citizen with certain quotas of freedom, formal equality and social rights. However, this is a task that the PP-Vox bloc and the patrimonial sectors linked to them have renounced. His project no longer involves the will to create any “glue” between the peoples, classes, groups or diversity of the State capable of creating a common citizenship that articulates an organic nexus between society and the 78 regime, but simply to repress, expel and eliminate the difference from it, generating levels of contradiction and violence that make the system shake when they govern. At the same time, it does not mean understanding the State as a space for the articulation of the general interest, but simply looting the public for personal enrichment (envelopes, commissions, black cards, etc.) and that of his business friends (contracts public, etc.). More than a project of a capitalist bourgeoisie, they currently make up a project of a pre-capitalist feudal bourgeoisie that carries a State where national and social conflict can only be expressed in the form of savage violence.

Second, the PSOE-UP alliance is the bearer of a national state-free market project with a conservative internal anti-conflict regime. His government project is articulated around a unifying conception of the nation or the “homeland” where territorial and class differences, in difficult times such as the current ones, must be left behind and overcome at a higher moment of pact and harmony for the work joint economic recovery of the nation, based on a supposed common sacrifice where the social welfare of the popular sectors can be made effective in a compatible way and without reducing the business of large capital and private companies (as if this were possible) .

This discourse of common sacrifice and reason (“We stop this virus together”) in favor of the economic recovery of the homeland generates two consequences: one, is to act as a new disciplinary social totem that acts as an anti-conflict category, serving to delegitimize and accuse those who mobilize in opposition to the collective interest. And another, the construction of a common sense of unity that forces the questioning of the pillars of the 78 regime (the monarchy, national unity, etc.) to be left in the background, wasting the opportunity for a crisis of legitimacy in that are found, to present these struggles as cultural battles that divide us at times where what is needed is unity to save the material (as if the pillars of the regime had nothing to do with the material). These two consequences make the PSOE-UP structural alliance in charge of exercising the function that, historically, should have been typical of a modern bourgeoisie: to act as a glue between society and the 78 regime.

And, thirdly, the ERC-EH Bildu-BNG-CUP-Más País-Compromís alliance… It carries a Plurinational-democratizing State project with the will to open the debate on the foundations of the regime and allow the new post-78 generations and the peoples of the State to have an opinion on what the 78 generation petrified in the Constitution. Also to reverse, through their comprehensive repeal, the main regressive laws of rights (labor reform, gag law, etc.) and propose a program of social shock in the face of the crisis not based on a common false sacrifice biased in favor of capital, but of redistributive transfer from the rich to the majority.

In a legislature with these three structural alliances in Congress, the UP’s relationship with the rest of the left-wing political forces occurs under a conjunctural but not structural alliance, since the latter has it with the PSOE. The conjunctural alliance is governed by the premise: “If they give me their votes, we must give them something in return” but this is always understood as temporary and functional to the State project of the structural alliance that remains in a superior hierarchical position. In such a way that, posed in contingent terms, the alliance between UP and the rest of the left forces does not serve to democratize the regime of 78, but to reinforce a project of reproduction of the same hegemonized by the PSOE.

However, what would happen if UP had invested or invested the subjects of its types of alliances? If he had left or left the PSOE alone in the government and integrated into a structural alliance with the bloc of left-wing plurinational forces to make, from the opposition, conjunctural alliances with the executive?

This would improve, in my opinion, the position of the left in the relational state system and would give it greater capacity to democratize the regime. The State is not only central regulatory institutions institutionally and operationally detached from society. This is intimately related to other institutional and social orders and their respective actors, which means that the decisions or norms that are approved within are the result of the struggle and the horizontal and vertical pressures between this entire network of agents within. of the relational state system. A structural alliance of at least 85 deputies from the left, from the opposition, reinforced with a strong popular mobilization in the street like that of 2010-2012, which would increase its capacity for pressure, would place the left as a whole in a greater correlation of forces than the current one within the state relational system.

This could force a PSOE government, in a minority even with Citizens, to have to open melons that even in the current legislature it maintains as closed taboos. It would not have been and would not be the same for a socialist government, in the minority, to be obliged to negotiate conjunctural alliances with a structural bloc of the entire political-social left located in a logic of conflict and transformation, than to have integrated, in a subaltern regime, to the most significant part of this left in the interior of its project of State and to drag it towards the logic of the anti-conflict and the preservation of the pillars of the regime. If the scenario were the first, surely, the prospects of conflict and transformation, in the current context, would be more hopeful than they are.