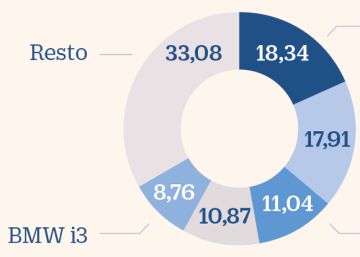 The Moves plan of help to the purchase of alternative vehicles (electric and gas) which the government approved in February, with a budget of 45 million euros, does not finish starting. The plan has not been exhausted in any of the seven autonomous communities to which more money has been allocated (distributed by amount of population), which are Andalusia, Catalonia, Madrid, Valencia, Galicia, Castilla y León and the Basque Country, which They all own 75% of the Moves plan money.

In Andalusia, the community that has the most budget, with 8,096,943 euros, the regional government only received requests for 15% of the budget allocated to the purchase of alternative vehicles, which is about four million euros (the rest goes to the installation of charging points and electric bicycles). Valencia has only given aid for a fifth of the money available to purchase vehicles, which amounts to 2.4 million. In Madrid, on the other hand, only one third was executed and in Galicia 42%.

Mario Armero, executive vice president of Anfac, the National Association of Car Manufacturers, points out that previous aid plans were "exhausted hours after starting up", but that the Moves is still not exhausted due mainly to the obligation to squash an old car of more than ten years. “Linking the crushing of a vehicle with these plans reduces its effectiveness. The obligation to deliver an old car to access aid is very interesting to encourage the renovation of the park because it moves individuals towards the change of car. However, in the face of alternative vehicles, it leaves out the aid to companies that want to acquire them for their fleets. They do not have vehicles as old in their portfolios, ”explains Armero.

The role of renting

“We propose that the crushing of another vehicle be considered not as a necessary condition, but as an added value that is economically prioritized. Failure to do so leaves out sectors such as the renting, which is the one with the highest growth in enrollment, and lacks vehicles to flatten out, ”adds the CEO of Aedive, an association of companies that promotes electric mobility.

Javier León, president of the council of renting In AELR (Spanish Association of Leasing and Renting), he complains about the obligation of having to register the car in the same autonomous community where the help is requested. “If there is a real commitment to the sustainability model, they have to be policies that are easy to implement and that are more centralized. There is no uniformity of criteria. This system is a real disaster, ”says León.

Among the seven autonomous communities with the most money allocated by Moves, Catalonia is the one that has executed the most money, with 81% of the budget. From the Generalitat point out that a priori the Moves plan turned out to be "more complex" than other previous programs for presenting a series of "more demanding" requirements, such as the flattening of an old vehicle.

Although sales of electric cars increased 126% during the first seven months of the year, these cars only accounted for 0.7% of registrations, with 6,198 cars sold, according to Anfac data. The manufacturers point out that the main problems to give an impulse to the sale of the electric ones are the lack of infrastructure of recharging points and the absence of more aids for the purchase of this type of cars, which still have a high price for The average consumer.

Proof of this is that the best-selling model among electric vehicles is the Tesla Model 3, which has a base price of 59,000 euros. The Nissan Leaf was the second most demanded model (they are the only cars that exceeded 1,000 vehicles sold so far this year) .In July only 739 electric cars were registered.

Andalusia. In this autonomous community, the deadline for requesting aid was opened on June 19. This region has not yet executed any budget item, as it is analyzing the requests it has received.

Catalonia. The Generalitat opened the application deadline on May 21. To date it is the one that has used the most budget.

Madrid. In April, it launched the plan, of which it has already assigned a third. The Community has also launched its own assistance programs (called MUS) for the purchase of new vehicles, which totaled a total of 4.5 million euros. The second edition of this plan, which was launched in April, is already sold out.

Valencia. Here the Moves was launched on May 30.

Galicia. It was activated on June 17.

Castile and Leon He opened the application deadline on May 31.

Basque Country. The first community to launch it, on April 4.

The most affordable reforms to improve the insulation of your home