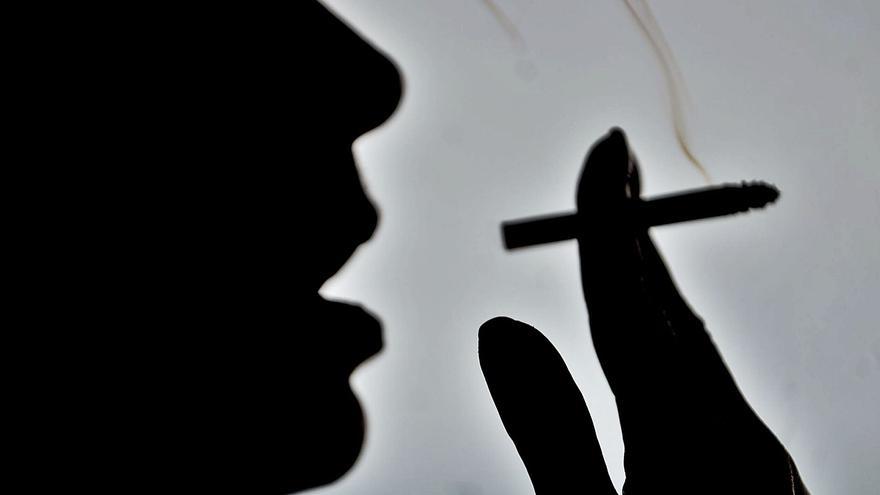 In addition, some companies such as Guaguas Municipales will place vinyls on transport vehicles to sensitize the population. “We have also contacted different gyms and there will be informational posters both in Las Palmas de Gran Canaria and in Gáldar, Arucas and in the south of the island”, says González.

But this is not all, as the organization has also involved parents’ associations to convey the message of awareness to their children.

And it is that the consumption of tobacco in young people is a worrying fact. According to the technician, at present, 22% of the Canarian population between 15 and 24 years old smokes daily. «This figure is alarming. In addition, we know that the first contact with the substance occurs at an earlier age and there are ten-year-old children who have already smoked cigarettes “, warns the psychologist.

But what is the motive? Ismael González is forceful. “We are facing a legal drug that can be accessed very easily. To this must be added that many parents choose to prohibit consumption, instead of informing about the dangers. Everything that is prohibited arouses curiosity », he values. To later highlight that shishas and vaping systems “are other instruments that can cause harm and create addiction.”

Based on the words of the prevention technician, during the period of confinement, the consumption of legal toxic substances increased and, as a result of the ban on smoking on terraces and walking on the streets to prevent the spread of SARS-CoV-2, smoking has decreased outside the home. However, in homes the reality is different. “We do not handle statistics, but consumption in these spaces may not have varied because nicotine is a substance that creates a lot of dependency,” emphasizes the professional.

In order to fight against smoking, the AECC works on different initiatives within the province. Thus, a project called Districts for Health is under way for the adolescent population, aimed at transferring the idea that young people can act as agents of change. “The plan is for them to start working on various projects thanks to our advice. We want to take advantage of the contact with young people to give the necessary instructions, ”says the professional.

On the other hand, in Gran Canaria, the organization will launch a project, in collaboration with La Casa de los Enigmas –an escape room company–, in which several institutes will participate. «They will receive some murals that will have a death as the scene and the students will have to find out the causes of death. The objective is to make visible the consequences that this dangerous habit can have, “he says.

Another of the great actions that will be developed in this campaign is the promotion of the Respirapp application, a software that was born a few years ago, but which has now been adapted to the capacity of new technological devices. It is a program that can serve as an alternative to the face-to-face courses that the association imparts to the entire population in general and in prisons to contribute to tobacco detoxification. Also, it can act as a complement to this activity. “The app is entirely based on the courses we teach and we have already publicized it on social networks, which is allowing us to meet many people who are interested in our courses,” celebrates Ismael González.

The program consists of three phases and assesses the level of dependence on nicotine that each user has. The first focuses on helping to manage the reduction of tobacco consumption, while the second considers the need for the user to choose a day to start being abstinent. The third, on the other hand, follows a series of steps to work on preventing possible relapses. «The tool is free and offers games and other distraction resources. It also has an emergency button, which can be used 24 hours a day, and which allows contacting a psychologist from the association in the event that the subject needs it, “he says.

Regarding face-to-face courses, it must be said that the AECC pays a lot of attention to raising awareness and motivation so that people can achieve the goal of stopping this harmful practice. “It is never too late to try and there will always be benefits,” adds González. “Many of them, such as increased lung capacity or the sense of smell and taste, begin to be noticed in the short term,” he continues.

In addition, the achievement of the goal leads to improving self-esteem, since it is a challenge that represents a great personal achievement. People interested in attending these sessions can contact the entity by phone 900 100 036.

From the institution, they recall that tobacco smoke contains more than 250 toxic substances and that it causes cancer in both active and passive smokers. One of the great purposes is that in 2030, people who turn 18 years old will never have smoked, as it is the leading cause of disease, disability and preventable death in the country.

Commit to quitting during Covid-19,

Tomorrow is World No Tobacco Day, a day that will also mark the beginning of a visibility and awareness campaign by the Canary Group of Lung Cancer and that bears the name of

. The initiative, which will last throughout the month of June, aims to raise awareness in society and support those who leave this habit with a positive, direct and dynamic tone. The objective is to take this message to all corners of the Islands, thanks to the support of society itself, the media, institutions and organizations, companies and well-known people who regularly collaborate with the group. Among the objectives of this campaign is the challenge of acting as a speaker in the Canary Islands of the mission

of the World Health Organization, to convince Canarian society about the benefits of quitting smoking with a constructive message and to warn young people of the harm caused by tobacco. | LP / DLP