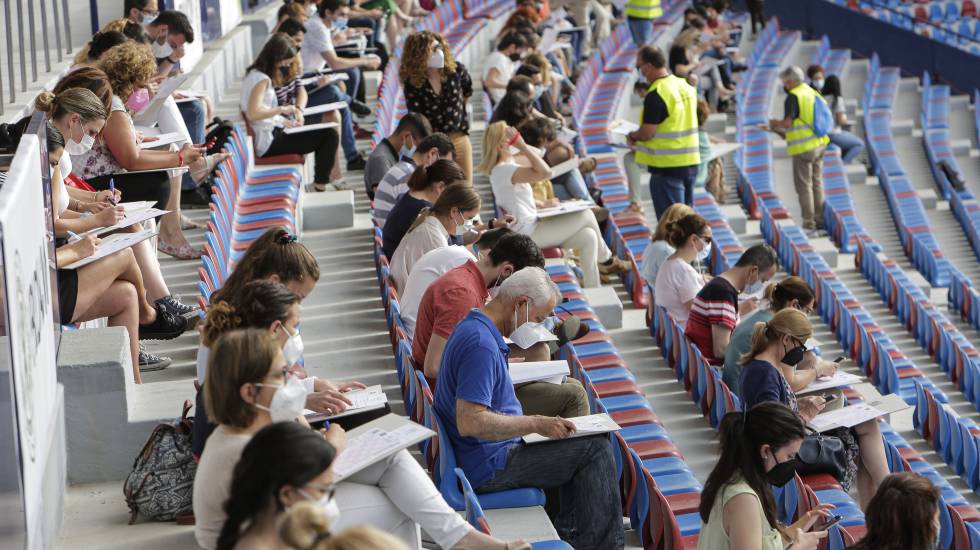 If the outbreak of the pandemic and the declaration of the state of alarm meant the immediate suspension of all oppositions, the slow but progressive return to normality, thanks to the advance in vaccination and the reduction in incidence, is assuming a reactivation of the public employment offer. In 2020, this postponement meant that thousands of opponents were left without knowing when or how they would be examined, but it also made it easier for many people to take advantage of the time to prepare the different entrance exams. The economic crisis also attracted those hard hit by the pandemic, especially “men and women over 40 who had lost their jobs or were forced into to an ERE or an ERTE, and that they considered the option of the competitive examinations to achieve greater stability in their life and ensure a decent job ”, says Jonathan García, CEO of the platform OpositaTest.

The profile of the opponent is still mostly female, but their average age (39) is five years older than in 2019, and the largest age group is already between 36 and 50 years (48%, compared to 33 of a year before), followed by those aged 26 to 35 (falling from 48 to 33%) and those over 50 (rising from 5 to 13.3%), according to a survey conducted at the beginning of the year by OpositaTest. Taking into account that 2020 closed with 936,200 people over 50 years of age unemployed (one in four unemployed), the preparation of public examinations is undoubtedly an increasingly relevant option. The majority of applicants (61%) affirm that they combine study with other obligations, be they work, family or academic.

It has not been only the profile that has changed: so has the way of preparing the oppositions, since the restrictions due to the pandemic caused an increase in interest in the courses and tools on-line: “This trend continues in 2021, although in recent months we see a change in methodology, which goes from 57% on-line (from confinement until March) to a growth of more than 20% in blended learning and even the resurgence of face-to-face academies ”, explains Ferrán Ferrer, CEO of Emagister. The digital methodologies help to maximize your time and help to personalize the study much more: “For me, the best thing is to combine the systematized training offered by the course of a face-to-face academy or a on-line, together with the search for content on platforms specialized in previous syllabi and tests, and closing the circle by sharing notes, group training or resolving doubts with other opponents ”, advises Ferrer.

The most demanded oppositions

According to the experts consulted, the health sector will once again offer a large number of places in different autonomous communities: “The Andalusian Health Service, for example, approved last week its Public Employment offer for 2021 with more than 4,000 places, in addition to having previous calls still pending ”, informs Inés Bra, content director of OpositaTest. But there will be other sectors that will lead a greater increase this year: Administration, Justice, Universities and the State Security Forces and Bodies open the way, without forgetting many other places that the communities have pending to convene.

Either at the state or regional level, “the most demanded competitions are still those of the C2 and C1 groups, for which it is required to have the ESO and the Baccalaureate, respectively: categories such as administrative or administrative assistants”, affirms Bra. At the national level, the General State Administration has recently summoned 1,600 positions for administrative assistants. On the other hand, the searches for courses to prepare for competitive examinations in the last two years are focused on the same topics: Public Administration, Security and Education (in that order), according to the Emagister Training portal. By specific courses, the most sought after are those of Renfe (11.6%), Civil Guard (8.3%) and Administrative Assistant (7.6%).

In the last two months, numerous competitive positions have been called, which traditionally are in great demand among opponents, and between now and the end of the year it is expected that the first tests of some of these calls will be held:

How to have a better chance of success?

The first thing to keep in mind is that an opposition must be raised in the medium and long term. “The cases of people who get their place after studying for two or three months exist, but they are not by far the common or normal cases,” warns Jonathan García. “The logical thing is that obtaining a place takes time, and whoever decides to compete must take it into account,” he adds. The preparation time, of course, is not the same in all oppositions, and will depend on the hardness of the same. In those of judges and prosecutors, for example, 71% of applicants have already invested at least two years, and 37.4% go up to four.

The following thing is to be well informed about the options and possibilities that you have, as well as the resources that will be needed to face the process with guarantees, and especially if it is possible to prepare them on your own or, on the contrary, the help is required. from a coach or academy. “In addition, it is important to always keep up to date and have the guarantee that the study materials are of quality and adapted to the peculiarities of our opposition,” recalls García.

Establishing healthy work, eating, leisure and sleep routines are also essential when it comes to maximizing effort and staying in the right frame of mind for a long-distance race like this. “It is useless to study a week 10 hours a day if the following week I am only going to dedicate two; consistency is key. You have to be realistic and establish a study routine that can be carried out. If you only dedicate yourself to opposing, consider it as a job and draw up a plan where you can also include your leisure time and, above all, rest, as this serves to establish knowledge, regain strength and maintain mental health, which is also very important factor ”, concludes García.