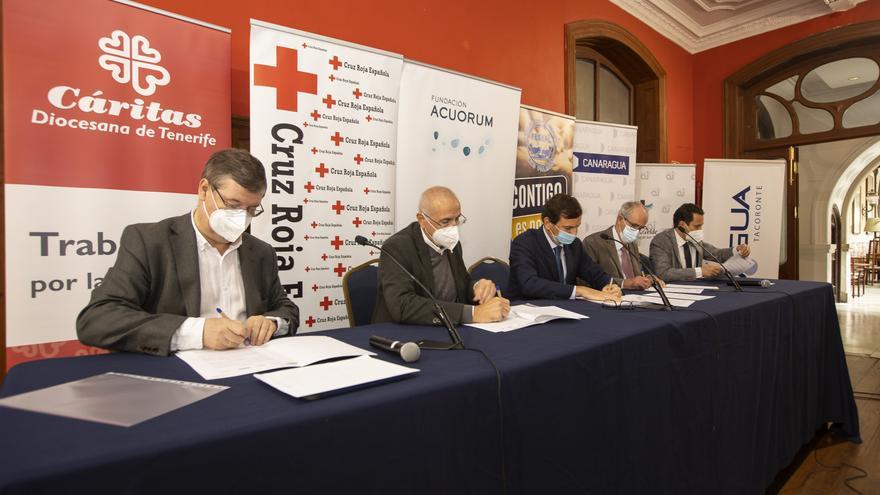 The Christmas Campaign of the Acuorum and Canaragua Foundation distributes 25,000 euros in aid to a thousand needy families in Canary Islands.

As usual since 2015, the Acuorum Foundation with its Christmas Campaign aims to support the largest number of families on the Islands who are in a situation of extreme vulnerability. This year, the sponsors show their solidarity with the island of La Palma, allocating part of the collaboration to families, who on the occasion of the eruption of the volcano of Old Summit, they have lost their homes.

The act of signing the agreements had the participation of Juan Rognoni, director of Cáritas Diocesana in Tenerife; Antonio Rico, regional president of the Red Cross in the Canary Islands; and Pedro Miguel Llorca, president of the Food Bank of the province of Las Palmas.

The agreement establishes for the Spanish Red Cross a financial contribution for a total amount of 7,500 euros. A percentage of this amount will be allocated to the acquisition of toys for the little ones during these Christmas dates.

The Red Cross campaign The educational toy under the slogan Your rights at stake will focus on the municipalities of Telde and Valsequillo, from the island of Gran Canaria.

"This contribution is an important contribution to ensure that no child is left without toys, since it is a fundamental element that favors the personal development of minors by endowing them with social values"

On the other hand, this economic aid will also serve to support the families of the island of La Palma in the delivery of "Ash kits" with the aim of improving the consequences produced by the eruption of the Cumbre Vieja volcano. For Antonio Rico, this contribution supposes "an important contribution to achieve, on the one hand, that no child is left without toys, since it is a fundamental element that favors the personal development of minors, endowing them with social values, hence the importance of their being toys that favor attitudes of respect and cooperation and on the other hand, the help that the citizens of La Palma suppose to be able to have precise materials to be able to adapt their homes and achieve, when the authorities advise, their habitability and thus alleviate the situation of vulnerability ”.

Cáritas Diocesana de Canarias will distribute the contribution received on the island of Tenerife with special dedication to the needs of the municipalities where Canaragua and Teidagua carry out their activity. The aim of the institution is to serve the most vulnerable families through the delivery of cards for the purchase in food establishments and basic necessities. With this Campaign, Caritas aims to make people feel free to be able to buy products by going to supermarkets. Likewise, Cáritas Diocesana will acquire new furniture to provide better care to families on the island of La Palma who have lost their homes.

The purchase of furniture will go to the new homes that have been granted to La Palma trees and to condition the parish centers in which many families on the island currently reside. Your CEO, Juan Rognoni expressed his gratitude to the Fundación Acuorum, Canaragua Concesiones, Aguas de Telde and Teidagua for the economic contribution that this Christmas Campaign represents. Likewise, he stressed that "Cáritas Diocesana has been present during the emergency that occurred on the island of La Palma, is present at this time and will continue to be, over time, serving the families who are suffering this catastrophe."

In the same way, he made reference to “the contribution destined to the island of Tenerife with the aim of meeting the basic needs of families who, with the structural situation of poverty that exists in the Canary Islands, live in extreme vulnerability and which has been increased by the current situation that we are experiencing produced by the Covid19 crisis ”.

The Acuorum Foundation and the Canaragua Group increase their collaboration with the Food Bank with a contribution of 10,000 euros with the aim of providing the most vulnerable families with basic and non-perishable food. The Food Bank will distribute the donation received among the islands of La Palma, Tenerife and Gran Canaria. The president of the Food Bank of the province of Las Palmas, Pedro Miguel Llorca He pointed out that “the Food Bank is dedicated to meeting the food needs of an important population, currently having 24,555 beneficiaries that make up 12,519 families. The objective of the Food Bank is to reach all that population that unfortunately are in a precarious situation. Fortunately, we Canaries are very supportive people and, in this case, we cannot forget about public institutions, foundations and private entities that provide us with financial support ”.

"If 2020 was a very hard year, 2021 is even more so, because with the misfortune that occurred on the island of La Palma, many families have lost their homes"

Furthermore, Pedro Miguel Llorca added that “if 2020 was a very hard year, 2021 is even more so, because with the misfortune that occurred on the island of La Palma, many families have lost their homes and now is the time to join our forces and begin to rebuild together the damage caused ”.

Its about seventh consecutive year in which the Acuorum Foundation carries out its Christmas Campaign and as explained by its vice president, José Sintes, “for the Acuorum Foundation it is an honor to be able to continue collaborating with the Institutions of Cáritas Diocesana and the Spanish Red Cross and also to be able to expand the contribution to the Food Bank this year. In addition, it is important to count on the collaboration of the Canaragua Group for this type of action, thus reinforcing alliances to achieve the objectives we set ourselves ”.

Likewise, he highlighted that “this year, the campaign has become more necessary than ever, allocating part of the economic contribution to help the thousand families on the island of La Palma who have lost everything as a result of the eruption of the volcano. In this way, the Acuorum Foundation feels committed to the Canarian community through its social projects trying to improve the standard of living of the families of the archipelago ”.

For its part, José Juan González Salmah, CEO of Canaragua Concesiones SA, pointed out that “the work of NGOs is very diverse, but in Canaragua we always find a common link with their activity: an interest in guaranteeing public welfare. In our case, we are also committed to our society, offering excellent service and efficient management of resources; and we get involved in the social reality of the islands, supporting this initiative ”.

"The work of NGOs is very diverse, but in Canaragua we always find a common link with their activity: an interest in guaranteeing public welfare"

González Salmah added that “we must be aware that one of the key problems is education, for this reason, Canaragua and Fundación Acuorum promote education through their projects in this area. The great subject that the Canary Islands has pending is dual training and we must feel capable of generating employment for young people by giving them an opportunity. In this way, if we manage to combine both, I am sure that we will have a better society ”.

The act of signing these three agreements joins the rest of the social projects with which the Acuorum Foundation collaborates with certain groups of Canarian society to improve people's quality of life. In this way, the Foundation shows its commitment to the Sustainable Development Goals set by the United Nations in the 2030 Agenda, in this case, with SDG 1 (End of poverty) and SDG 17 (Partnerships to achieve the objectives) .