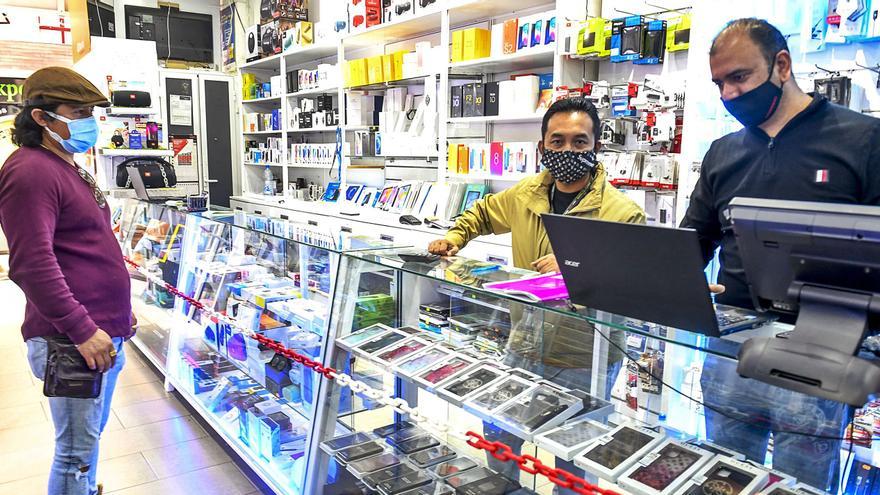 In the end, what many feared came to pass. The alert level 3 that had aroused so much panic among the bars and restaurants of Gran Canaria, and that had been planned as a real threatening shadow during the last days of this week, was approved yesterday by the Government of the Islands and is now a reality in all its harshness that will force the closure of gyms and gaming halls, as well as bars or restaurants that do not have outside terraces. The rest will have to reduce tables and diners and close at 22.00 as a new curfew.

This, of course, was something we all already knew. However, the consequences will not stop there, because the closure of the hotel industry will have collateral effects on small businesses in the two large commercial areas of the capital of Gran Canaria, Triana and Puerto. And, taking into account that Spain is a country based on the services sector, all businesses facing the public are going to have to change some rules if they want to survive in this reality.

At first, the first measure that many of these establishments are going to take, whether they are selling electronic products, glasses, perfumery, clothing or jewelery, will be to advance the closing half an hour since the number of sales of these small businesses is very subordinated by those customers who go to dinner at restaurants but who usually stop by and browse their stores.

This is the intelligent reflection that some of the owners of the stores located on Luis Morote street made yesterday, which, precisely, subsist mostly thanks to the arrival of tourists from the cruise ships in the Port of La Luz. These are businesses run by merchants of Hindu origin who have lived for several generations from the sales of electronic devices, clothing or beauty products. Anil Shamdasani Shamdasani, owner of the Arkay perfumery, emphasizes that since the pandemic “we are going for 40% less sales, although we have had months that we have closed because with less purchasing power people do not perfume, do not wear makeup, etc. ” In his opinion, alert level 3 is a measure to slow down social gatherings a bit, “make it difficult for us not to be able to see each other, so that we don’t mix”, something that is fine, “but we would have to look for other formulas because sitting on a terrace, I don’t think it’s a contagion route ”, he says.

This measure is going to affect the economy “because people do not gather or go out as much”, but it is that, in addition, in his opinion, it also creates a certain fear psychologically. “Knowing that we are on alert 3 produces a fear in older or vulnerable people,” he reflects, “and that they think ‘I was going to take a walk to the beach and I’m not going out anymore’, because it is assumed that we are worse than before with what that people stay at home and there is less traffic and less shopping ”.

Shamdasani believes that decreeing it for 14 days is not to be so shocking, but that it is “like when they confined us they told us’ hey we’re going to have you only fifteen days,” but during this time the contagion that occurred in Vegueta during on Christmas Day. “What we are experiencing is very complicated,” he says. “And it is difficult for the legislator as there are many people who do not understand what they are doing, but politicians are the ones who are surrounded by technicians who have to advise them.”

Sunglass Fashion’s Bhart Thawani Thawani underlines the consequences it will have on small stores like hers. “If the restaurants close at ten o’clock at night we will also have to advance the time because they will go out to dinner much earlier and from eight o’clock there will be no one on the street.” And it is that, indeed, this change of schedule in the hospitality industry causes that clients do not go to his store. “Now, instead of closing at 8:30 p.m. we will do it at 8:00 p.m., while they will close at 9:00 p.m. to be home at 10:00 p.m.”

The pandemic situation has very negatively affected this business of selling sunglasses. “There is little we can do now,” he says. “If you lower sales by 25%, the Government helps you, but only with 400 euros, and we received that contribution with the cessation of activity in March or April, but it has not been the same for everyone because the self-employed they have treated fatally ”, he adds.

Vinod Shamanz Aashirwad is the owner of the Quemoviles.com store, specialized in sales of mobile phones, laptops, accessories, etc. This businessman points out that with the pandemic “we have lost a large part of the business because there are no cruise ships, there are no tourists, and you cannot say anything either because they are supposed to be doing something for the good and you have to accept it.” But Shamanz assures that with level 2 the business dropped a lot “because many people do not have work and do not come to buy, with which the arrival of customers has fallen between 40 and 50%”.

Madhavlal Bhagwani, from the Topaz perfumery, located between Luis Morote and April 29, recalls that, regarding the numbers of infected “we started very well in March”, but then the folly returned and at Christmas there were regrettable situations in the shopping centers in where there was no crowd control “creating a fire that we are now paying for”. For Bhagwani “in the small business the capacity and social security measures are controlled, but in the shopping centers none and they are all paying for the broken dishes”.

The worst thing for this businessman is that with the hotels closed and the flights canceled, no cruise ships come, the arrival of tourists and people from the Peninsula has been drastically reduced “and my business depends mostly on foreigners.”

His business, in particular, has dropped sales by 80%, which has had to cancel contracts or take workers to an Erte. And he assures that “if they had controlled bars, restaurants and clubs at the time, all this would not have happened.” And finally, in the same Luis Morote street, a somewhat exotic beauty store is striking that has been operating in the area for a short time but with great success.

This is Buena Cosecha in which the young shop assistant Fátima Falero Martín, who specializes in natural cosmetics, handmade soaps that they make themselves, shampoo, scrubs for hair and skin, etc. The business has been running for two years with a very loyal clientele. Fátma Falero assures that “these measures are going to have a consequence in all the shops on this street”, because the characteristic of this area of ​​the port stands out for the alternation between restaurants and shops that feed back on each other and what happens in one affects the other. “We close at 9:00 pm, but with the new curfew people will pick up earlier,” he says. “If with level 2 at 7:00 p.m., there were not so many people, imagine what will happen with alert level 3 that will make the streets empty much sooner.”

This will cause “people to change their leisure routine” and that there is a much longer time interval in which stores, like yours, will not receive customers. Therefore, all this will lead, as in the rest of the businesses, in which they have to close much earlier. Images of the owners or managers of three of the six businesses who yesterday gave their opinion on the new level of alertness in Gran Canaria. Above, the merchant Vinod Shamanz Aashirwad, from the electronics store Quemoviles.com. Above, Bhart Thawani from the Sunglass Fashion glasses store. And on the right, Fátima Falero from the Buena Cosecha natural products establishment. Everyone agrees that they are going to have to modify some aspects of their business due to the restrictions on the hospitality industry. |