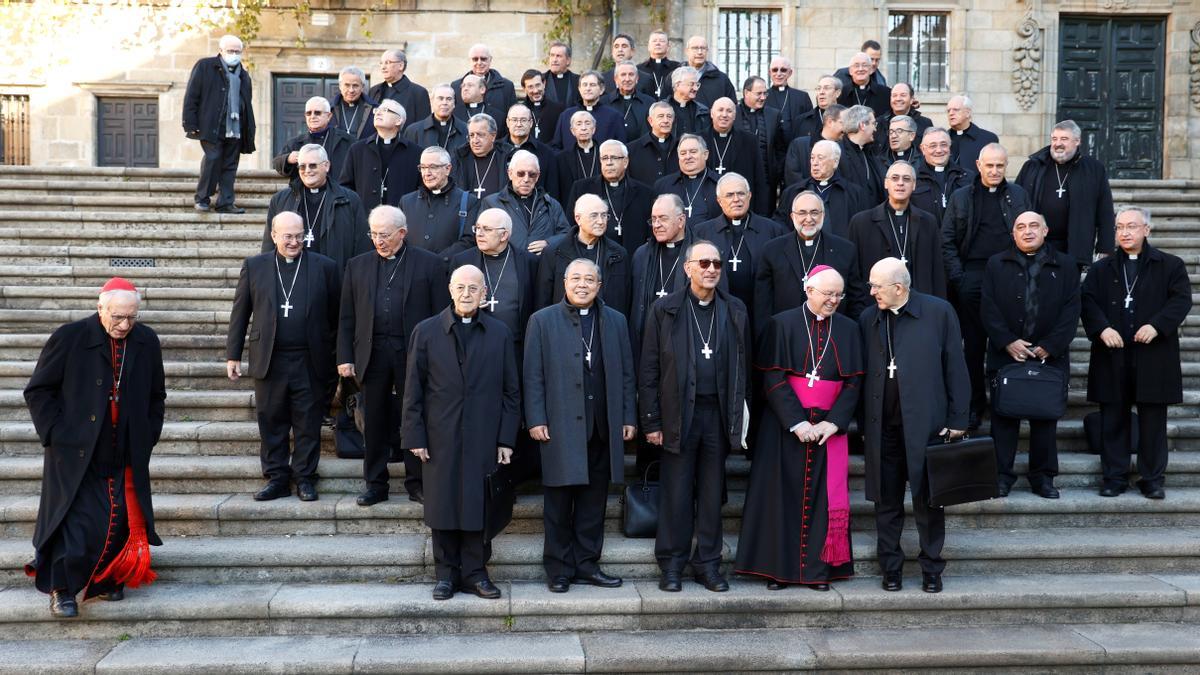 The accumulation of investigations for pederasty in the Church has between paralyzed and even more divided the Spanish Catholic leadership. The bishops who follow the line set by Pope Francis and the ultra-conservatives who are removed and ask that any institution be investigated are experiencing a kind of schism that is deepening, as reflected by the Executive Commission this Wednesday: they have been unable to make a communication .

“We find ourselves in a kind of Sadducean trap: if the Church, with legal arguments, made it difficult to participate in this investigation, it would be presented as an absolute refusal. We are going to see how events unfold, if the commission is approved and under what terms." To date, this has been the only official response from the Episcopal Conference to the various requests for a commission of investigation of clerical pederasty in Spain. And so it will be, because this Wednesday, the Executive Commission of the Episcopate has met in Madrid, without issuing any note or making the slightest reference to pederasty, or to the report that the State Attorney General's Office released this Wednesday, which figure in 68 the alleged cases of abuse of minors in religious areas who investigates

The above statements came from the mouth of the EEC spokesman, Luis Argüello, before the bishops withdrew last week from spiritual exercises. For a week, the The official Church has not wanted to answer the question of whether it will participate in some of these initiatives, to which they have been invited, according to government sources. Church representatives, however, deny having received any invitation.

What will the Spanish bishops do in the face of the different investigative commissions proposed by the political parties, and requested by the victims? Nobody knows. This same Wednesday some official communication was expected from the Episcopate. There has been nothing after the meeting of its Executive Commission, one of the main decision-making bodies of the Episcopal Conference -the Permanent Commission will not be seen until March 8- and the Plenary Assembly, which brings together all the bishops and which is scheduled for April 25. But there was only silence. The Spanish Episcopal Conference, as a collegiate body, continues without speaking.

When, finally, the bishops speak, they will do so deeply divided: for months, they have not been able to agree on a common position in the face of the escalation of information about the abuse of minors in the Spanish Church.

“Whatever we do, whatever we say, we are going to come out badly,” says a source from the Casa de la Iglesia – headquarters of the Episcopal Conference –, who explains that, at most, what the Executive Commission could have done it was to issue a note, but not make decisions that fall to each individual bishop. And it is that, despite what one might think, the Episcopal Conference coordinates, but does not command. And the decision to go to a commission or open diocesan archives corresponds to each bishop. That is the rule by which this institution is governed.

“The president of the Episcopal Conference does not command the dioceses. Each bishop only responds to the Pope”, emphasize the experts. "During the years of Rouco Varela's mandate, it may have seemed so, but the reality is that Omella is not the cardinaldoes not want to be, and could not, even if he wanted to, force any bishop to do anything, "they conclude.

In fact, the Archbishop of Barcelona is one of the few who has moved to investigate cases of abuse. For years, even before being president of the Episcopate, he received and sent to Rome some files that came to him, from individuals to the media. His position is clear: the abuses must be investigated. Is an investigation like the one carried out in France or Germany necessary? That is another story, as he himself pointed out at the end of his meeting with the Pope in mid-January.

Officially, the Episcopal Conference believes that a global investigation of the abuses within it “is not convenient”, but that each victim must be supported “case by case”. In fact, although the protocols are clear when it comes to opening an investigation, supporting or repairing the victims, the truth is that each diocese acts as it believes. “And, sometimes, how can we”, analyzes a member of one of the commissions to help the victims.

In the Executive Commission that directs the Catholic leadership, a deep gap between the bishops regarding this and other issues is also reflected. Thus, among its members, we can find prelates who clearly support the reforms of Pope Francis - the position against pedophilia cannot be separated from the support, and opposition, between the Spanish episcopate to this Pope, and one of the reasons why that Bergoglio will not visit Compostela this summer–, like Omella or Cardinal Osoro; and others who denounce "a general cause" against the Church, such as the Archbishop of Oviedo, Jesús Sanz.

In recent weeks, another of the members of the Executive, the Archbishop of Burgos, Mario Iceta, showed his "shame" for sexual abuse, and was willing to collaborate "in everything within my reach to eradicate this evil in ecclesial spaces and in all areas." The rest of the Executive, like the vast majority of bishops, "wait for the storm to pass. But it will not happen, not this time," add episcopal sources.

Because this is the other problem faced by open-minded bishops and in line with the Pope: the feeling, installed among the majority of the Episcopate, more conservative, of a "persecution" against the Church on account of abuses. "Why are the abuses of other institutions not investigated?", they respond from the Episcopal Conference that, however, in recent days they have opted for a low profile that, according to some sources, would respond to a change in strategy. The idea, now, is to focus on the victims and not so much on the investigative formula, waiting for the politicians to agree. And, meanwhile, save time.

In this perspective, it can be understood last video recorded by the press officer of the Episcopal Conference, Josetxo Vera, in which the thesis of the general cause against the Church pointed out until now by his direct boss, Bishop Argüello, who has not offered a press conference from the headquarters of the CEE for several months, does not appear anywhere. The last one was in November 2021 from Santiago de Compostela. Behind this strategy, some sources point to the hand of the priest Silverio Nieto, head of the Civil Legal Service of the Episcopal Conference, and who seemed to have been ostracized after his involvement in 'Operation Kitchen' and his never clarified role in the management of cases of pedophilia in recent years.

However, some think that it is necessary to go much further. Already in November, before the scandal broke out after the delivery to Pope Francis of a report by The country, as elDiario.es advanced, half a dozen prelates demanded in the last Plenary Assembly an "internal study" that would allow, at least, the bishops, to have a photograph of the historical reality of the abuses in Spain. An initiative that was rejected, but which, together with the media scandal of recent weeks, caused prominent bishops to go beyond the official line and show their willingness to investigate and repair the victims.

The clearest on this point has been the Archbishop of Madrid and Vice President of the Episcopal Conference, Carlos Osoro, who curiously has not participated in the Executive meeting in Rome, where this Thursday he will be received by Pope Francis. Osoro, who missed the recent visit ad limina of the Spanish bishops to the Pope after testing positive for coronavirus (in Rome, the prelates did not receive a public reprimand for their refusal to investigate pedophilia, but they did receive a reminder of what practically all the dioceses have done), activated months ago the Repair Project, which welcomes victims of abuse from Madrid, and from other dioceses.

What's more, The Madrid Archbishopric has dismantled this week the hoaxes defended within the Church itself about allegations of abuse. At the same time, he stressed that "the cases of the past are cases of the present (...). The pain of the victims does not prescribe. It is necessary to investigate and denounce possible cases of abuse."

Other bishops, such as that of the Canary Islands, José Mazuelos, or that of Zamora, Fernando Varela (the first to announce an internal investigation of the past in his diocese) have also been in favor of investigating all abuses. Also, the Archbishop of Santiago, Julián Barrio. None of them is part of the Executive Commission that, for the moment (and with it the official representation of the Spanish Church), remains mute. “We have not wanted to do an investigation, like France or Portugal, and now we are already late. And perhaps we deserved it”, concludes a bishop.