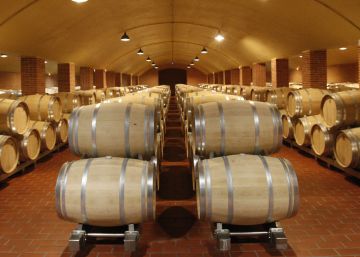 The Vega Sicilia Wineries, producers of one of the most recognized wines in Spain at an international level, raised their profits a little more than 40% in 2018. They earned 24.6 million euros, compared to 17.34 million in the previous year, in good part for the sale of a property with a capital gain of 6.4 million. The company has delivered its results in the Mercantile Registry, together with the required annual management report. In the case of Vega Sicilia, this report is, however, atypical, since beyond talking about wine or wineries, it makes a strange description of the march of the planet, the clumsiness of the Spanish governments and the risks of a world that ages, but that is more sensitive and feminist.

The company Bodegas Vega Sicilia was established in 1964 to integrate into the classic winery that under this brand produced wines from the 19th century. Both the winery and the vineyards are in the town of Valbuena del Duero (Valladolid). The company that directs Pablo Álvarez It is owned by a heritage company called El Enebro, which was originally founded by businessman David Álvarez, now deceased, who bought the wineries in 1982. He is now in the hands of his children, and is controlled by five of them after an internal struggle with his others. two brothers, focused in turn on the control of Eulen, a security and services company that his father also founded. In addition to producing Vega Sicilia and Valbuena, the brothers have opened other wineries with other brands such as Alión and Pintia, also profitable.

The strange management report that accompanies the accounts starts with a "dear shareholders". First, he reviews the progress of the company in the last year in a colloquial language. Point out that it has been another "bright year" with an "outstanding increase in wealth obtained". Review the 2018 harvest at the Vega Sicilia farm (415,000 kilos of grapes, 36% more than in 2017). And the sale of bottles, of different vintages: this year they have dispatched 363,819 in total (1.6% less) and 166,911 in export (8.6% more). The company has strict production methods and limited sales by quotas, and as 2019 there will be fewer bottles available, it warns that they must "sadly cut back in the national market" and thus sustain export growth.

After this review, the author of the report gives shareholders an analysis of the Spanish economy and society with an atypical tone for these types of reports. "In Spain, the year 2018 has been another year, more of the same, but increased by the unexpected departure of the minority government from the PP," he reviews. Remember that another PSOE Government arrived, which could not carry out the Budgets. "The economic system Spain is a labyrinth. It grows more than any of the important countries of the EU and, nevertheless, we increase the public deficit, we increase the public debt and we do not substantially reduce unemployment. It is something similar to the scientific experiment of the" morphic resonance "where Spain is located – in several aspects – in the order of the" clumsy "and, nevertheless, its new descendants (new governments) do not surpass the predecessors except in clumsiness", he says. According to the winery, not only Spain fails, since "non-evolutionary behaviors seem to generalize in the western world, where many large countries are in ostrich mode."

On the march of the world economy, he points out that "personal and social conscience is shifting towards a sensitization, just as more feminist (…) that will transform – with time – the world concept". Among other things, he warns: "Artificial intelligence seems to be changing, importantly and irreversibly, a part of the future we are going to live; and hopefully for the good of most people, although it has shadows. It will also cause in people a brain development, because it will require minimums (technological interaction with people) that are superior to the usual ones in today's world. " And he continues: "But let's not fool ourselves, an important part of society that does not intend to make the slightest effort is going to exclude itself. It is as if to be fit, you enroll in a gym, you pay the fees, you go to the gym, but you just look. "

Even so, Vega Sicilia is optimistic with the current year: "This 2019 brings, in economic terms, great uncertainties because open globalization has significant imbalances, but we will overcome the setbacks and grow globally, even if they are not neon figures. The planet will develops irreversibly and, as a whole, human economic wealth is almost miraculous. "

More sales and 5.7 million in works of art

The long management report accompanies some accounts that are "neon" for the company. The company has sales of 37.49 million, 3.1% more, of which 1.3 million do not come from wine, but from the provision of services and the sale of other products. Of the total production, 19.8 million turnover is achieved within Spain, 7.95 in the rest of the European Union and 9.67 million, in the rest of the world.

Among its heritage, it has the vineyards, the winery and the wine in development (the value of its existing stocks is registered at 30.3 million euros, including "bottled and aging wine" valued at 8, 2 million), as well as works of art and other items valued at 5.76 million euros. The company notes that in the year of 2018 it has proceeded to make a distribution of dividends between the partners of 30 million euros, compared to the 1.5 million that were distributed the previous year.

The group has, in addition to the classic wineries of Vega Sicilia, 100% of the shares of the wineries of the other brands with which the family produces wine: Alión in Peñafiel (Valladolid), Pintia in San Román de Hornija (Valladolid) and Tokaj Oremus, a historic producer of sweet wine in Hungary that he bought a few years ago; as well as 50% of Macán, the winery that it shares with Rothschild since 2017. It also controls 100% of Quexigal, an estate in Ávila.

Of all these companies, the most profitable is the Alión winery, with a net profit in 2018 of 3.85 million; followed by Pintia, with 205,000 euros; and Tokaj Oremus, which contributes 159,000 euros. Meanwhile, the Avila estate loses 316,000 euros; and the winery that it shares with Rothschild, the company's newest project, has losses of just over a million euros.