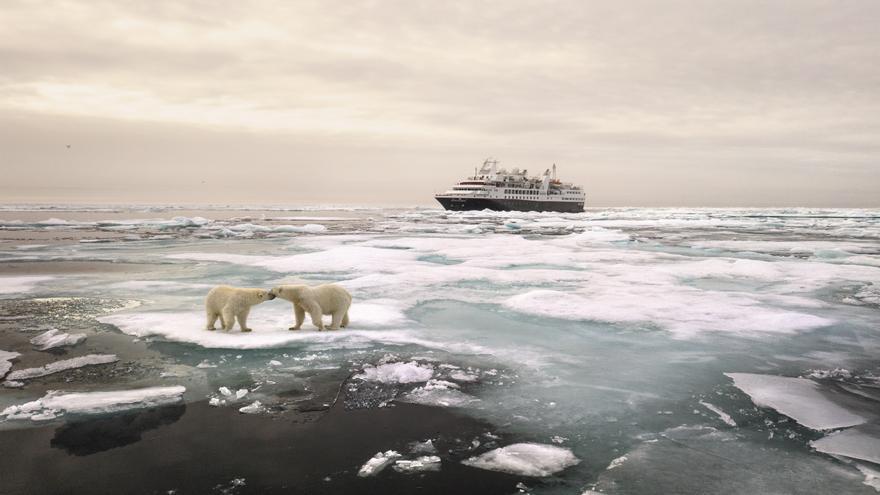 The Arctic continues to melt at an accelerated rate: this summer the extent of the ice sheet over the ocean has marked the second low on record: 3.74 million km2 measured on September 15, according to the National Ice and Snow Data Center of the USA (NSDIC). Only in 2012 did it melt more during the summer months. The disappearance of ice in the Arctic is affecting the flow of air called the jet stream that regulates much of the climate in the northern hemisphere of the Earth, which multiplies by three the frequency of extreme weather events such as hurricanes, droughts or storms that already affect to Spain.

Although the Arctic Circle is more than 3,000 kilometers in a straight line from Spain, its deterioration is not something far off. Dr. Jennifer Francis, from the Woodwell Climate Research Center in the USA, makes the interconnection between the loss of ice and snow at the Earth's north pole and episodes of storms or acute droughts from which no geographical point is saved. : "Due to this loss, the Arctic and the planet are rapidly becoming darker places that absorb more and more heat from the Sun. This exacerbates global warming by 40% and accelerates the rise in sea level, melts glaciers and permafrost and modifies the jet stream that regulates the climate in the northern hemisphere. "In this way, in the last 40 years, extreme climatic events have multiplied." It worsens the heat waves that prepare the way for forest fires ", Francis concludes. Without going any further, Spain supports already twice as many heat waves which are increasingly prolonged, as certified a few days ago by the Spanish Meteorological Agency. There has also been an increase in torrential storms -with associated floods- and destructive coastal phenomena that many miles of altered coastline are carried away.

In the first week of September, the Arctic Ocean ice melted more rapidly and outpaced last year's rate due to the warm air that has blown in from central Siberia. It is the second time that the minimum has fallen below four million square kilometers. In those seven days, ice has been lost to an average of 79,800 km2 each day. This summer season has demonstrated "the long-term decline" in this area of ​​the planet crucial for climate stability, says Julienne Stroeve of the University of Manitoba and University College London. "Each country is collaborating in the loss of this ice with its greenhouse gas emissions. As the planet warms, the Arctic melts," he warns, establishing a direct relationship between CO2 emissions and the deterioration of the polar cap .

These scientists hope to reactivate the action of governments against climate change at the meeting that states will have this Thursday at the UN. More taking into account that this year's Climate Conference (COP) has been suspended until 2021. Precisely in this edition, countries should have presented their evaluations on the results of their plans to comply with the Paris Agreement and the new commitments to the next five years. All of that has been diluted with the COVID-19 pandemic.

But while multilateral action to curb the climate crisis has slowed, the melting of the Arctic has not stopped for an instant. And with her, desire to take advantage of the disappearance of the ice economically. This year, the ice-free sailing season across the Arctic started early last July. By that time, there were already 853 ships ready and waiting to transit this route. In 2016 there were 463. That month, 171 ships made 299 crossings. The previous course, 131 ships had sailed through these waters in July. Last Friday, the Reuters agency revealed that international investors, including France, had decided to finance a Russian project with 9,000 million dollars to extract liquefied natural gas in that area (up to 20 million tons). Liquefied natural gas, presented as a transition fuel that is more respectful of the atmosphere, is still a fossil fuel that emits greenhouse gases. An arctic sea with less and less ice has allowed the promotion of plans for the extraction of hydrocarbons, fishing and the transport of goods. Gail Whiteman, from the Business School of the University of Exeter, counters that the destruction caused by climate change caused by the deterioration of the Arctic is quantified at 16 trillion dollars. "The Arctic is a parameter of the global risk we face."