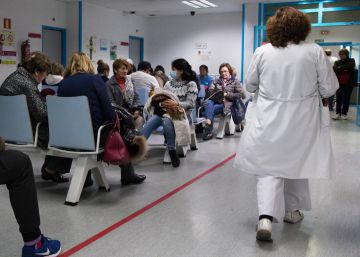 The urgencies of Spanish hospitals are up. The doctors who work in them, who complain about saturation, lack of staff and a dubious health education of some citizens, who often go to this service without a real need. The data also shows it. In the last five years with available statistics, the number of emergencies treated in hospitals has increased by 9%, according to data from the autonomous communities compiled by this newspaper (see graph). Meanwhile, the Spanish population is practically stagnant.

What leads citizens to increasingly resort to this service? The experts consulted point to reasons that have to do with patients, which demand more and more immediacy for ailments that are not always serious or urgent; but also with the system, which is not able to solve problems quickly enough in other instances and leads users to go to a service where they know they will be taken care of at the moment.

The consequences are negative for the entire system. And also for citizens. Although hospitals apply triage to prioritize the most urgent cases, the time spent in others that are not necessary reduces personnel and infrastructure for those who need it most. And the cost is paid with everyone’s money: while a primary care consultation has a cost of around 70 euros (varies depending on the autonomous communities), emergency care without hospitalization reaches 300.

A survey last December of the Facua consumer association It showed that 35% of users have to wait a week or more to make an appointment with their family doctor. Here lies part of the problem. “When a person is sick, he asks for an appointment and gives it to him within 10 days, or goes to his family doctor without an appointment and overloads him even more or goes to the emergency room, which causes them to be overwhelmed,” says Vicente Matas, vocal Primary Care of the College Medical Organization.

“When you have a problem that you think is urgent, you want it solved, and luckily we have a health system in which almost everyone has a hospital nearby, which facilitates access,” adds Rafael Reig, head of Trade Union Action from the Satse nursing union. “But many times – he continues – there is no real urgency; more than 80% go on their own initiative and do not require admission or referral to the doctor ”.

Professionals working in hospital emergencies report from cases that come to request a discharge (corresponding to primary), to advance a diagnostic test, to any scratch.

Although some autonomous communities begin to publish data on the triajes, that is to say, how much population goes by slight, serious or very serious ailments, they are still few. Some of the reports also include the percentage of hospital admissions for all emergency care. In most, while the number of cases goes up, the percentage of them who have to stay in the hospital goes down. In Madrid, for example, it amounted to 11.5% in 2012 and has been falling to 9.8% in 2018. “This is one of the data that indicates that there is not enough severity, although not all urgent cases require hospitalization ”, reflects Ignacio González Lillo, master in Health Management, emergency and primary care physician.

“We are in a society that is getting used to immediacy in everything, and it is confusing it with urgency,” says Lillo, who believes that patients with poor criteria or taking advantage of the system are part of the problem, but not the only one Main: “There is a failure in the structure: primary care, which is the one that must solve most problems, is abandoned.”

The study Estimate of the supply and demand of medical specialists. Spain 2018-2030, showed that there are nine specialties in which there are difficulties to meet the needs of the autonomous communities. They are headed by primary care: pediatrics and family and community medicine. While in hospitals the number of doctors has grown by 7%, from 2014 to 2017, in primary school it remains stagnant.

“We have passed an economic crisis that resulted in health. There were staff cuts that have been corrected over time, but we do not reach the necessary figures, ”says Gabriel del Pozo, general secretary of the State Confederation of Medical Unions (CESM). And this has been primed with the primary. While the investment in specialized is already above the pre-crisis levels, in the health centers in 2017 it was still 1,000 million euros (9.5%) lower than in 2009.

In a health system such as Spanish, the impact of all this varies greatly depending on the autonomous communities. Although the burden of the emergencies has grown in all, there are great differences between the 459 attentions per 1,000 inhabitants of Navarra and the more than 700 of Andalusia, Madrid, Baleares, Ceuta and Melilla.

Beyond the resources of each autonomy, this is also explained, according to Pozo, by the floating population. “Tourists who do not have a specific doctor’s assignment go to the emergency room. This may be the case in Madrid, the Balearic Islands and Andalusia. In Ceuta and Melilla’s, it has more to do with addressing many emergencies in the surrounding countries. There are many citizens from Morocco with European citizenship (and health card) who have retired or are on vacation in their country, but when they have a disease, they go to a system that gives them more confidence and security, ”says the union leader.