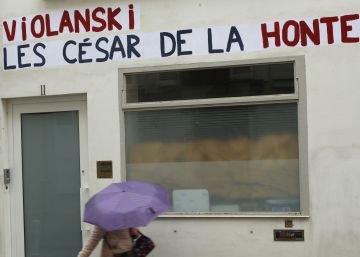 The sigh of relief has not lasted long. Perhaps Roman Polanski's announcement that he will not attend the Caesar ceremony tonight in Paris has somewhat calmed the nerves of organizers and presenters of the most important gala of French cinema. With its decision, one of the most obvious potential conflicts of the night is deactivated, in view of the numerous external and internal protests of the world of cinema that unleashed the record nomination to 12 caesars who received his last movie, The officer and the spy, while new accusations of rape against the Franco-Polish director coincided with its premiere. But the storm that sets in the Pleyel hall in Paris where the main figures of the French cinema will gather tonight is deeper and harder to placate.

For starters, Polanski can still win prizes such as the one with the best direction, which could stir the ceremony in and out of the room. In fact, several feminist groups have decided to keep on Friday the protests called for weeks in front of the red carpet to express their rejection of the celebration of a converted figure, for not a few in France and beyond, in symbol of impunity of sexist violence.

In addition, the problem does not revolve only around a single name. The entire César system, and therefore the French national cinema, has been questioned in recent weeks by hundreds of actors and filmmakers, who have openly criticized the opacity and lack of parity of the Academy of Cinema awarded by the French Oscars, as well as a lack of diversity that, they underline, does not resolve the other 12 nominations of The Miserables from Ladj Ly.

Complaints have already led to the complete resignation of the Academy leadership. Symbolically, it announced, this week, the appointment of a woman, the producer Margaret Menegoz, on an interim basis at the head of the institution, which has also promised a profound renewal in the coming months to meet the demands of more diversity and parity of its managers and even members. Another woman, actress and humorist Florence Foresti, will be the main presenter of the ceremony.

And, despite everything, the clouds continue to threaten rain and hurricane winds tonight Paris, both outside and inside the Pleyel room.

Polanski's announcement, which he made through a statement sent to the France Presse Agency (AFP), arrived just 24 hours before the start of the gala. "For several days I have been asked: 'Will you go to the Caesar ceremony or not?' The question I ask is rather the following: 'How could it go?'. This promises to become more of a symposium than a film party that is supposed to reward its greatest talents, ”said Polanski, who has emphatically denied the latest accusation against him, which was made at the end of last year by photographer Valentine Monnier , which ensures that the filmmaker raped and hit her in 1975.

Director, which described the dozen accusations of aggression against the past decades of "ghosts of sick minds"He said that if he has made this decision it is to "protect" his family, but "he regretted" that this prevents him from "facing a self-proclaimed court of opinion willing to trample on the principles of the rule of law so that the irrational triumphs again "

However, it is not only the “activists”, as Polanski calls them, who criticized the presence and even the director's awards. Another nominee, actress Adèle Haenel, also lamented the rain of nominations that Polanski has received for her film. “To distinguish Polanski is to spit in the face of all the victims. It means: "It is not so serious to rape women," he told The New York Times the nominee for best actress for Portrait of a woman on fire. The two-winner César has already become one of the faces of the French Me Too after accusing director Christophe Ruggia of having sexually abused her as a teenager.

This same Friday, also the Minister of Culture, Franck Riester, questioned the possibility that Polanski wins the prize for best direction. Although he expressed himself in favor of “not mixing works and artists” and warned against “doing justice instead of justice,” in an interview with France Info Riester, he once again stressed that “not because he is an artist , even a very recognized one, there can be a guarantee of impunity. ” Therefore, although he did not rule out that The officer and the spy It is done with other César who reward the entire team, he considered that giving Polanski the prize for best leadership would be a "bad symbol before the necessary awareness against sexist violence."