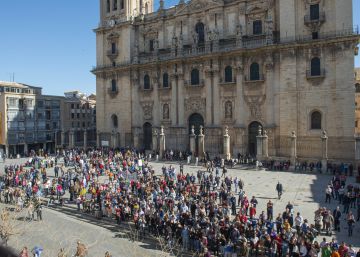 The 97 municipalities of the province of Jaén were paralyzed this Monday from 10.00 to 12.00 in defense of a fair price in origin for olive oil. The protest tries to make visible the problems of the traditional olive grove, the most punished by the crisis and the threat of cuts in community aid from the CAP. The agricultural organizations Asaja, COAG and UPA, Cooperatives-Agro-alimentary and Infaoliva continue like this with the calendar of agricultural mobilizations throughout the country, which will continue on Tuesday with cuts of the main highways in Seville.

The citizen platform Jaén Deserves More, one of the promoters of the revolts of empty Spain, has asked the Jiennenses “to get up from the sofa.” Jaén is the main olive focus in Spain, with 40% of the national olive oil harvest.

Dozens of farmers have not waited for the concentrations in the public squares and early in the morning they carried out cuts of the A-32 and A-316 highways, at the height of the municipalities of Villanueva del Arzobispo, Arroyo del Ojanco and Porcuna, with tire burning The Civil Guard intervened and restored circulation. The convening organizations have been cleared of these unauthorized cuts.

On the eve of this mobilization, the Provincial Headquarters of Traffic in Jaén has begun to notify sanctions imposed from the Civil Guard to olive growers who on January 30 participated with their vehicles in the cuts of the main roads of the province of Jaén. At the moment, there are half a hundred penalties, mostly 200 euros, for driving on the highway with vehicles with which it is expressly prohibited. But there are also fines for talking on the phone while driving, for driving with private vehicles at a lower speed than established, or for not wearing seat belts in agricultural vehicles.

And all this while the agricultural sector is finalizing the realization of a march on foot to Madrid, where they would continue after a camping trip. It would be a protest that would have its origin in Jaén, but where farmers from the rest of the country have been invited to participate in a great mobilization and camping in Madrid. A green march similar to the one that the Andalusian countryside already did in 1997.

Another action that the olive sector has already activated is to oppose frontally the exit of tank trucks from cooperatives and oil mills (more than 400 in the province of Jaén alone). They try to reduce stocks and supply in the market and thus lead to a price increase. This measure is announced recently completed the harvesting campaign this year, where national production will be around 1.1 million tons, less than initially planned.

The atomization of the cooperative sector has been a delay for producers, who have always been at the mercy of the large distribution. To this we must add that around 60% of Jaén’s olive production continues to be sold in bulk in tankers, with Italy as the main destination and then sold in the United States, a country that does not apply the 25% tariffs on oil in bulk and yes to packaging.

The Olive Oil sector of COAG (Coordinator of Farmers and Livestock Organizations) has announced that it will pursue oil imports, “thus putting name and surname on the companies that carry them out and that contribute to crushing the productive fabric.” “We have no more waiting capacity,” said the COAG provincial secretary, Juan Luis Ávila, for whom, according to estimates, around three million euros per day are lost as a result of these types of practices. Likewise, and as another measure of pressure, the COAG oil sector considers, from now on, priority objectives within the mobilization of all ports, where it will create monitoring groups for imported oils.

The organization will also ask for a review of the free oil entry agreement from Morocco, “which has become an oil drain of the entire Maghreb and an oil that does not require the same quality and environmental conditions.” Thus, they demand the stoppage of active improvement traffic, “which allows goods not belonging to the European Union to be transformed into customs, without being subject to import duties, other charges, as well as trade policy measures.” “It seems a lie,” added COAG, “that the ministry has not yet paralyzed active improvement despite the serious crisis in the oil sector.” Thus, COAG asks to review the quotas approved with the rest of the Maghreb countries; to the port authorities, who carry out detailed controls and reports of what is entering, how and who brings it; and to the Junta de Andalucía, after knowing that large quantities of oil are entering Andalusia, responsibility is demanded and fulfill its mission.