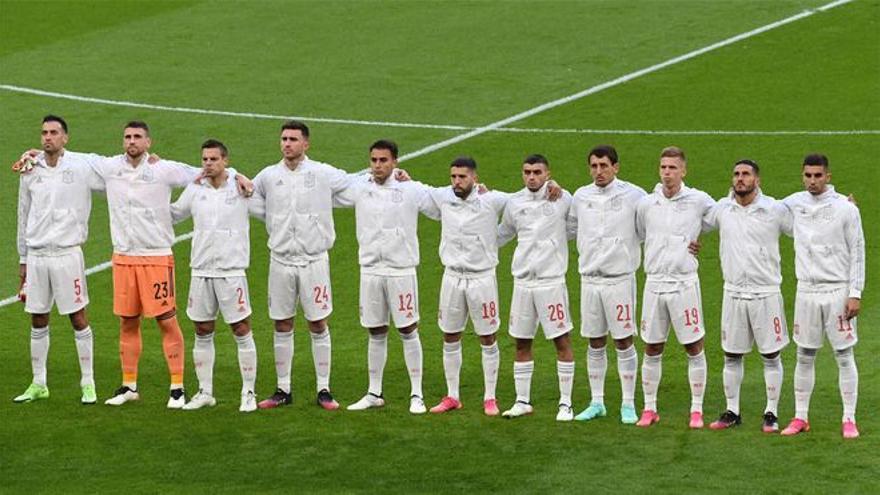 Spain was left out of the grand final despite proposing and being superior at stake to an Italy that, far from the brilliance it was showing in this European Championship, was reminiscent of the old days and had luck on its side on penalties.

Luis Enrique surprised from the blackboard. Faced with an Italy with two reference centers such as Bonucci and Chielini, he opted to start Morata and play with a false ‘9’ in the figure of Dani Olmo. In addition to the egarense and Oyarzabal, the other novelty regarding the eleven regarding the quarters was the inclusion of the azulgrana Eric Garcia on the shaft to the detriment of Pau Torres, so that Laporte he returned to his usual left profile.

The staging of the Red was unbeatable against a defensive Italy and those of Luis Enrique clearly won the battle of midfield and possession, but the goal was missing. The Italians did, despite appearing much less. It was after the break when Chiesa overtook Mancini’s men, but Morata came off the bench to equalize fairly.

Another extension, the third in a row and as hardly anything happened, penalties again. And this time Unai Simón could only tackle one, while Dani Olmo and Morata missed the Red one. This is the 1×1 of the Spanish players against Italy:

Italy raffled everything to the fast cons and the Basque goal had to go desperately on more than one occasion. Brave, he showed his personality, although at times he risked excessively and his hasty. Chiesa’s goal unstoppable, he could do little. He saved a penalty, but could not dress up as a hero this time.

César Azpilicueta, in a match at Euro 2021. Agencies

He had a very interesting fight with Insigne, whom he managed to stop despite the devilish speed of the Italian. His good positioning was essential to keep his area at bay, although the effort took its toll and he came out with discomfort.

He returned to eleven in a demanding game and fulfilled with a note. Very well positioned, he perfectly fulfilled his role in both marking and construction and did so with the poise and serenity more typical of a veteran. A ramp on the calf prevented him from finishing the game.

It is understood why he is the only defense to whom Luis Enrique has made him play everything. Take the line, anticipate and move the ball. Very demanded by the speed of the Italian points, their rejection was not enough in the action of the goal ‘azzurri’.

Italy commands respect and Alba was involved in defensive work. Although he raised the band and offered solutions, he did not reach the baseline as assiduously as in other games.

He participated in the creation of the plays to overcome the rival wall and multiplied in the containment before the speed of the ‘azzurra’ to launch against. Attentive to the crossing and any fissures, he had a great opportunity at the start of the second half with a shot from the front that went high almost.

Koke in the match against Switzerland. Agencies

It was not an easy game for the mattress, who brought out his quality in the dropper pass. Disfronted in the stocking, he lacked more spark but was not denied work capacity.

Pedri, during the match of the Spanish team. Sefocotball

Nothing can with the Tenerife native, he is tireless and he executes everything at great speed. He gave clarity to the Spanish attack, starting the game with an exceptional pass to Oyarzabal. He maintained a very high rhythm throughout the game, fresh as a rose and always taking the best option to find the best positioned teammate.

The executor of the last penalty against the Swiss was one of the bets on the starting eleven. He started from the right with a lot of mobility in the attack zones. He enjoyed very good chances, but he failed to adjust his sights and his insistence was unrewarded.

Dani Olmo, in an action for Italy-Spain. Agencies

The weapon to destabilize the experienced transalpine power plants was its location as ‘false 9’. A constant nuisance with great ability to play between the lines, he had an unbeatable chance that Donnarumma intercepted as best he could. Great game from Egarense, key with his wall in Morata’s draw. Too bad about his penalty.

He appeared by surprise from the left wing and starred in dangerous actions. Well guarded, he could not find the auction in the best conditions and was the first substituted.

The sacrificed in the starting eleven did not act on the front but on the left when he entered the grass, but when he returned to his natural zone was when he marked the differences. He has the goal between eyebrows and eyebrows and found it at the right moment. A great goal from a gunner, but he threw the maximum penalty that ended the dream of Spain very badly.

The forward of the Spanish team Gerard Moreno. Reuters

Tireless in his work to destabilize the Italian defenses, he did not find the ways of the shot, but he was impeccable from 11 meters.

Rodri, one of Luis Enrique’s changes in the match against Italy. Agencies

He was on a double pivot with Busquets and the team appreciated the oxygen supply in the spinal cord. He finished behind Thiago dominating the entire wide area.

His entry into the green at Wembley brought a lot of energy to the right wing with his usual rides.

He tried to bring freshness in the pass, in an advanced position, but he needs more minutes. He cheated Donarumma on his penalty.

Pau Torres in a match at Euro 2021. Agencies

He saved a very dangerous counter with his heel. Quiet and hassle free.