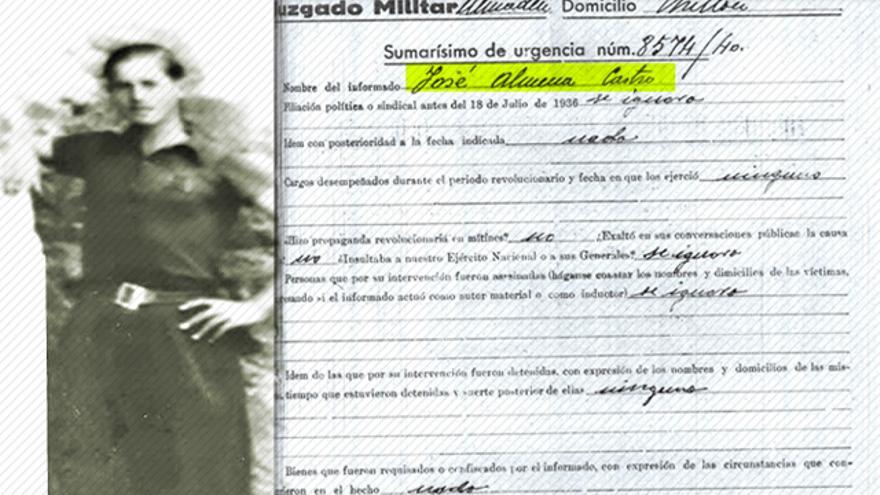 Knowing that the day his lifeless body was released from jail he was wearing the ring and razor that he has held in his hands eight decades later is a small joy, a way of getting closer to his uncle, whom he never met. Bonifacio Almena Ramos holds the small wooden box that the Association for the Recovery of Historical Memory (ARMH) has given him with both objects, the two that appeared in the exhumation of José Almena in the León cemetery more than a year ago . This month his family has been able to collect his remains and take them to the small town of Gargantilla, in Ciudad Real, the place where he was born and spent the few years that the Franco dictatorship allowed him to live.

José Almena was arrested when he was only 18 years old, in 1940. He was charged with aiding the rebellion for having handed over a rifle to the guerrillas in the area, but the investigations carried out by the ARMH have not been able to clarify what exactly happened. . Both he and several testimonies indicated then that the weapon was found in the field, where due to his dedication as a shepherd he used to spend the vast majority of the time, away from the town, and that he was threatened to hand it over.

The summary trial to which he was subjected, however, concluded that he collaborated with the guerrillas. They found no data on any kind of political affiliation; it is determined that he did not make “revolutionary” propaganda or “exalted” in public “the red cause”, one of the folios of the cause reads. The Military Legal Prosecutor even affirmed that he was a defendant “of unknown ideology”, although at other times the case indicates “a leftist tendency”, but at no time demonstrated. Even so, this did not prevent him from being sentenced to the death penalty after spending almost a year in prison for a crime of joining the rebellion, which automatically commuted him to 30 years in prison.

He did not meet even two. And he did it more than 600 kilometers from his home, in the provincial prison of León, where he fell ill with tuberculosis and died on April 28, 1943. According to the burial books of the city’s cemetery, he was buried in the part civil, the place destined to the burial of victims of the repression and “disaffected” to the regime, among whom was also Genara Fernández, a teacher whose remains were also exhumed by the ARMH. He was looking for her that he found Almena’s whereabouts: “It was a thorn that the family had, but they only knew that he had died in León,” says Marco González, coordinator of the project and vice president of the memorialist association.

His nephew Bonifacio has been the one who has followed the process most closely and came to move from Ciudad Real to witness how the association pulled his uncle out of the ground, and also the ring and razor that surely belonged to him. “When I arrived there were ten centimeters to go to discover the remains. The objects are very curious, perhaps it is what he had with him at the time of his death,” explains Bonifacio to elDiario.es. The things found in exhumations may seem insignificant, but they are often used to identify victims and reconstruct the memory of those who carried them. Sometimes the families keep them, in others, as in the case of the Almena, they bury them again.

Eight decades after being sentenced to 30 years in prison without evidence, José Almena has returned to his hometown and his remains rest in the family niche, along with his mother. It was “the obsession” of Bonifacio, and he had agreed with the rest of the brothers: to take him to his grandmother, who died in 1988. “He had to suffer a lot, if he lived, he would have wanted it that way. I have felt it as a moral obligation, If anyone could do something, it was me and I finally succeeded, “he says satisfied on the other end of the phone.

The second burial of the young shepherd, the dignified burial in his town, and not the one for which he was condemned to a nameless grave, was “very moving,” describes his nephew. Several family members attended the act of handing over the remains, to which volunteers from the association also traveled, and in a “simple act” they were again deposited under the ground. Bonifacio only has the regret that his mother could not see him. He died at the age of 99 just one day after he returned from the exhumation in León, and he never learned that “the uncle’s issue” was “solved.”

She was the only one who told her about José, her father’s brother, once the ARMH contacted them to inform them that they had found him, not before. That of the Almena family is a story, like others, like almost all of the victims of repression and the dictatorship, incomplete. “Nothing was said about this,” says Bonifacio, who imagines that his father “must have had a very bad time,” but never said anything to them. His mother did explain to him how little he knew: that he had been arrested working as a shepherd, that “he was a kid who had nothing to do with politics” and that “he did nothing but be with his sheep.”

Ana Cristina Rodríguez, historian at the University of León and technical director of the exhumation, explains that, although “it is not unreasonable to think” that he could have any connection with the guerrillas, the case reveals that “they have no evidence against him” . At the time when the Francoist army revolted against the government of the Second Republic, José Almena was 14 years old and “no type of militancy.” The explanation that Rodríguez gives to the “harsh sentence” that they ended up imposing on him is that “it has an exemplary character”: “In areas where there were guerrillas, who were a strong opposition to the regime, the repressive climate soared, and the authorities they harshly retaliated against these contexts. “