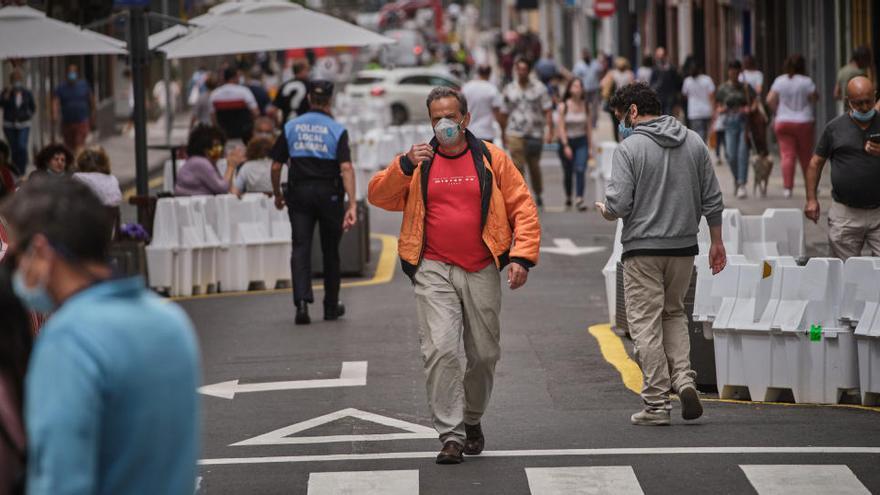 The cumulative incidence of cases of covid-19 detected in the last 14 days per 100,000 inhabitants places three Canarian municipalities, all of them in Tenerife, at high risk, with La Laguna leading the list with extreme risk, followed by Santa Cruz and La Victoria with high risk.

The objective set by the Government of Spain is to reduce the accumulated incidence in the previous fourteen days per 100,000 inhabitants to less than 25 cases, one of the eight factors used to place the country and each region at one or another of the risk levels.

In this classification, the Canary Islands would be at medium risk, as well as the islands of Tenerife, El Hierro and Lanzarote, while Gran Canaria, La Gomera and Fuerteventura would be at low risk and La Palma at a new normal.

According to the data provided by the Ministry of Health corresponding to November 2, in the Canary Islands only one municipality would be at extreme risk, La Laguna, with 268.57 cases diagnosed per 100,000 inhabitants in the last 14 days, and at high risk would be Santa Cruz de Tenerife, with 188.12, and La Victoria, with 163.31.

The remaining 55 municipalities would have less than 25 cases diagnosed per 100,000 inhabitants in the last 14 days and therefore meet the “new normal” requirement. Thirty of them have actually had no cases in the last two weeks.

When analyzing these indicators, it must be taken into account that in municipalities with little population, unlike large cities, a single outbreak of a dozen cases can trigger the incidence rate, something that also occurs in the smallest islands.

Tenerife is the island with the highest accumulated incidence, 116 cases, an incidence marked by three municipalities, which are the only ones that are above the island’s average: La Laguna, Santa Cruz and La Victoria.

Overall, the island has one municipality at extreme risk, two at high risk, seven at medium risk, twelve at low risk, and nine at the new normal, three of them with zero incidence (Buenavista del Norte, Fasnia and Vilaflor).

El Hierro is the second most affected island, with an incidence of 82.1 cases, but the distribution is very uneven among its three municipalities.

The third most affected island is Lanzarote, although it is below the average for the Canary Islands with its 56.50 cases (medium risk), and in this case the incidence is marked by a single municipality, its capital, Arrecife, which with its 127 , 01 cases would also be at medium risk.

All the other municipalities of Lanzarote are in a situation of new normality, with diagnosed cases ranging from zero in Teguise to 19.52 in Haría.

Gran Canaria is the fourth island with the highest incidence, with 48.90 cases and therefore at low risk, with its capital, Las Palmas de Gran Canaria, as the only municipality that exceeds the average for the Canary Islands, with 95.28 cases and medium risk .

It is followed with medium risk by Tejeda, with 52.38 cases, while the other 19 municipalities are in a new normal, with values ​​that oscillate between zero (Agaete, Artenara, Moya, San Nicolás, Valleseco, Valsequillo and Vega de San Mateo) and 22.45 (San Bartolomé de Tirajana).

After Gran Canaria, La Gomera is the most affected island, with 46.50 cases, low risk, but with two of its municipalities at medium risk: Vallehermoso with a cumulative incidence of 103.41, and San Sebastián de La Gomera, with 76 , 98.

The incidence in the other four municipalities of La Gomera is zero, so they are in the new normal.

The island of Fuerteventura also remains at low risk, with 38.50 cases, and only its capital, Puerto del Rosario, is at medium risk, with an incidence of 68.71, followed by La Oliva with 48.91 and low risk .

In a new normal would be Pájara, with 18.96 cases, as well as Antigua, Betancuria and Tuineje, with zero cases in the last 14 days.

The island least affected by the pandemic is La Palma, where eleven of its fourteen municipalities have an incidence of zero cases in the last 14 days, including its capital, Santa Cruz de La Palma.