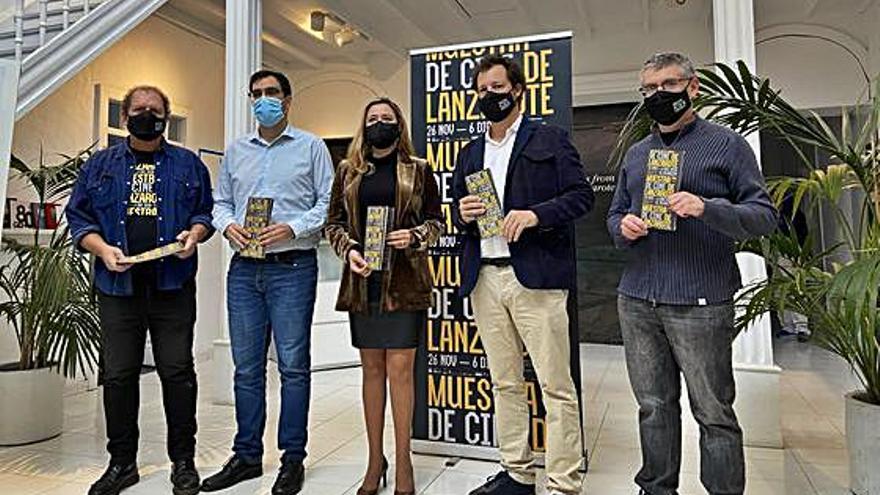 The president of the Cabildo de Lanzarote, María Dolores Corujo, supported this Thursday the Lanzarote Film Festival at a press conference in which the councilor for Culture of the Cabildo, Alberto Aguiar, also showed his support for the project. It is an institutional support for a project that celebrates its first 10 years of life and has established itself as a national and international reference.

The presentation revolved around the importance of a project like the Film Festival for Lanzarote, capable of providing great educational value and reinventing the island as a cultural destination. The Buñuel Room at El Almacén has hosted the program, which will address crises and the ways in which humanity manages to overcome them. After a decade of work, the Show has become a benchmark project for the Island. As Javier Fuentes Feo, director of the project, has pointed out, the Film Show wants to be one more example of how cultural projects add up and collaborate so that our island is an interesting place, both for its inhabitants and for those who visit it ”.

Marco Arrocha Pérez and Juan Rafael Martínez Curbelo (Busqui), creators of the Lanzarote Film Festival, have been, together with Javier Fuentes Feo, in charge of giving the award to Claudio Utrera. The Canarian journalist wanted to dedicate his first words to thanking the organization of the Exhibition for the award and said that he felt “doubly happy, since receiving an award is always a joy, but in this case, it comes from the hands of a Film show with which I share the language. Without a doubt, one of the most peculiar characteristics of the Show is that it bets and appeals to the conscience of the spectator. Something that I have defended as a critic and that I defended as director of the Las Palmas Film Festival ”.

In addition, Utrera has highlighted that “independent cinema is much more than an opportunity to spend two hours of fun, and this Show understands it and is going for it. Here they risk, they seek innovation, clarity and transparency of content. Both I, as a professional filmmaker for so many years, and the Show share that film should make the viewer think, reflect, make him throb inside to see the world from different perspectives ”.

During the presentation in which, on the part of the Cabildo, the following intervened: Mr. Benjamín Perdomo, Managing Director of the Centers for Art, Culture and Tourism, Mr. Jose Alfredo Mendoza, Councilor for Culture of the Arrecife City Council, and Mr. Alberto Aviar, Councilor for Culture of the Cabildo of Lanzarote the international repercussion of this project was highlighted. While among the cultural representatives who participated in the inauguration, the participation of the historian Arminda Arteta and the poet Melchor López stood out.

The tenth edition of the Film Festival will screen its first films this Friday, November 27. The theme will revolve around the way in which different communities around the world went through serious crises.

San Francisco removes names of Spanish heritage from its schools

San Francisco removes names of Spanish heritage from its schools

Actress Cloris Leachman, grandmother in ‘Malcolm in the Middle,’ dies