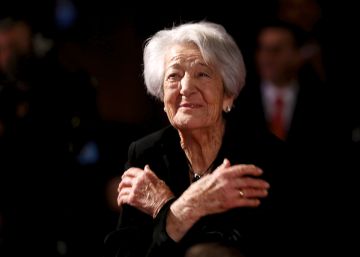 Asuncion Balaguer, who never lost his Catalan from Manresa as he kept talking to her with perfect music, embraced the very young theater, triumphed in Madrid and consecrated herself as an actress: she quickly recognized her as “la Balaguer”, an appellation to the great . Soon a handsome actor, one Paco Rabal, "his Paco", the great Paco Rabal, crossed into his life, to whom she gave herself body and soul with a love without limits but always knowing who she was with, and why she was. A lucid and conscious love.

In the mid-eighties he occasionally returned to the trade. I was lucky to meet her and learn to love her in the television series Cats on the roof, directed by Alfonso Ungría and starring, among others, by Emma Cohen and José Sacristán. I worked as an actor in this series and there I could already appreciate the great artistic and human quality of Asuncion.

And when Paco – her Paco – turned her into a widow, she flourished again as an actress with a spectacular mastery and a “hook”.

And in the year of grace of 2012, all his teammates – technicians, actors, singers, dancers and dancers, musicians, offices, and of course the public that filled the theater daily and responded with overwhelming enthusiasm to the show offered by magnificent performers- , all I repeat and underline, we had the great luck to see her act and sing and dance in Follies, in an absolutely great and captivating way.

Brava, brave in rehearsals, learning tap, studying her songs, disciplined, tenacious, was not the older companion of eighty-seven years that you look with some condescending tenderness, no. He was brave, steady, hard, pounding … and smiling and full of charm.

In Follies, in the end, the audience burst into applause and braves dedicated to the protagonists, standing up, but when it was Asuncion's turn that became a tsunami: standing theater, endless screaming, the Spanish, as it is said in the theatrical slang, it was falling apart. And she, humble, did nothing to artificially lengthen that endless applause. His triumph was everyone's. Because we loved her and were aware of her art and her worth. his Broadway Baby It was worldwide.

Asuncion, wherever you are, you deserve the best place, my love receives my admiration and my most absolute recognition.

I can only wish you a good trip to infinity and thank you. Thank you for being as you have been, for letting me be close to you and for showing your love for the theater and for life.