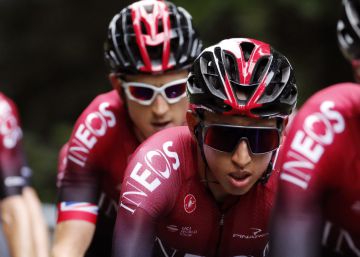 Dylan Teuns, a member of the escape that formed 155 kilometers from the finish line, raised his arms in the grueling final at La Planche des Belles Filles, after a day with seven scoring ports that marked the first great stage of the Tour de France. The stage left the first differences between the favorites to dress of yellow in Paris, with Geraint Thomas giving a blow on the table after arriving alone after starting less than a kilometer for the end. Giorgio Ciccone, who finished second after getting into the day's escape, snatched the yellow jersey to Alaphillipe for just six seconds.

Movistar took the control when they were just under 40 kilometers and imposed a rhythm machacón to reach the penultimate port of the day. There, Valverde gave continuity to the work of Carlos Verona and began to perform the real screening in the group of favorites, which was reduced before the arrival at La Planche des Belles Filles. Until, four kilometers from the end, Mikel Landa jumped to try to make good the work of Movistar.

But the courage of the Basque was not enough to get ahead. Landa was caught after a snatch of Alaphillipe, who was trying to keep the yellow jersey, with just over a kilometer to go. His wheel jumped Geraint Thomas, reigning champion, who was the only one capable of holding the last arreón the French and ended up putting nine seconds to Landa, Nairo Quintana and Egan Bernal. Something else was left Enric Mas, who reached 31 seconds from Thomas. A blow with which the British presented his candidacy to revalidate triumph in Paris.