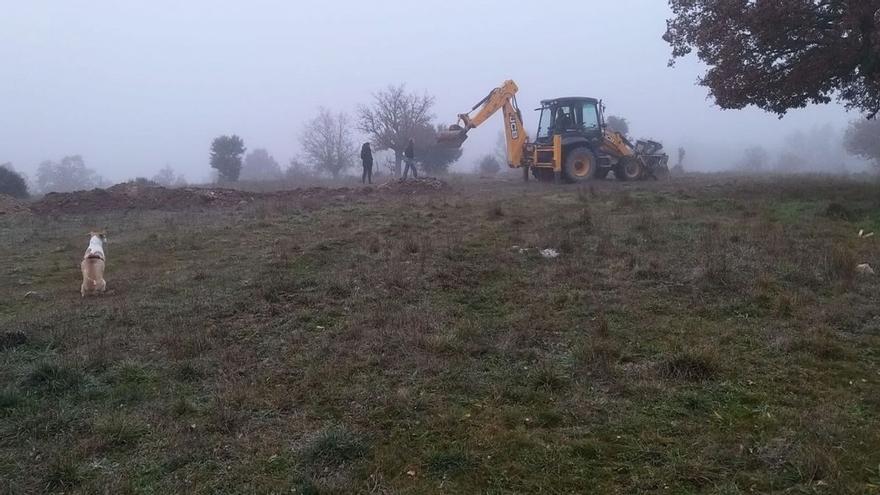 The Asociation Salamanca Memory and Justice continue collecting data on the whereabouts of Atilano Coco and the other five victims of reprisals for the rebel side of the Civil war who were shot at dawn on December 9, 1936, after being illegally taken from the Salamanca prison.

This association dedicated to repairing the memory of the victims of Francoism is certain that Unamuno's friend and the rest of those killed that night were buried in a common grave to the left of the N-630, already in the province of Zamora.

Unfortunately, the archaeological surveys carried out last December in a meadow in the area of ​​Peleas de Arriba, a few meters from El Cubo de la Tierra del Vino, did not give the expected results. No human remains were found and the earth was very shallow in that specific area, insufficient for a burial.

However, the investigations of Salamanca Memoria y Justicia point to that area between El Cubo and Peleas, close to the highway, and several testimonies collected from residents of El Cubo specifically pointed to the farm where the excavations began.

“The workers who worked here had Plowing prohibited at this point, they were told that there were people buried here”, explains Luisa Vicente, president of Salamanca Memory and Justice, at the excavation site. At the point indicated by these testimonies, work began, carried out by the Aranzadi scientific society. From there they were raising earth for three days, without success, to cover everything and return it to its original state.

85 years have passed since the death of Atilano Coco and the other prisoners of Salamanca, a very long time in which the orography of the terrain changes its appearance, roads change location, and people's memories can fail. That in three days of excavation they did not appear does not mean that they are not found in that same farm, and the association does not rule out resuming the work in the near future.

Appeal to the neighbors of the Land of Wine

For this reason, from this Salamanca association of Historical Memory they make an appeal to the residents of El Cubo de la Tierra del Vino, Peleas, and other towns in the area, who know something about some grave or burial near the road. Good for having seen it or because they have heard it from their parents.

Everything indicates that these six murdered people cannot be found very far from the area excavated in December, perhaps a little further north. but get Testimonials that help locate it more precisely could be essential for future prospecting to be successful.

Atilano Coco was a natural teacher from Guarrate and lived in Salamanca, where he dedicated himself to teaching and working as a priest of the Protestant Church. A man with great intellectual concerns who used to share gatherings and walks with Unamuno. The Basque writer tried several times to intercede with Franco to save the life of his friend, but to no avail. The friendly relationship between the two was brought to the big screen by the filmmaker Alejandro Amenabar in the movie 'While the war lasts' (2019).

Coconut He ended up in prison in Salamanca for professing a religion other than Catholic and for having been initiated into Freemasonry. When they took him out of prison he went to kill him. He was 34 years old and had two children with his wife, Enriqueta Carbonell. Today he is considered a martyr by the Spanish Reformed Episcopal Church, which has built a university residence in Salamanca under the name of Atilano Coco.

Atilano Coco with his wife Enriqueta Carbonell and their children. Assigned

Along with him, at dawn on December 9, 1936, Dionisio Báncora Bravo, 35, a native of Hiendelaencina (Guadalajara), son of Cipriano and Antonia, well known in Salamanca for having been the maitre d' of the casino, was murdered.

Fifth, a painter from Béjar, Andrés Pérez Corrales, son of Paulino and Ezequiela, a bachelor, was released from jail that night.

The sixth victim expected to be found in the grave is a merchant from Ciudad Rodrigo, Eladio Rivera Huertas, son of Leonardo and Amalia and married to María Paz Ullán Bote.

If Salamanca Memory and Justice manages to find the mass grave, a DNA analysis compared with that of their descendants will confirm the identity of each body. The association will simply take care of giving them a dignified burialeither in their places of origin if the families want it or, if not, in the Salamanca cemetery.