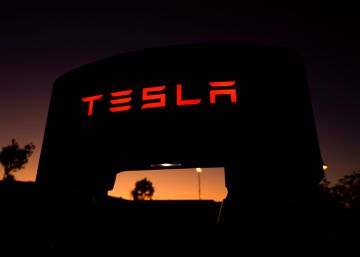 Elon musk He has succeeded. Tesla, the company that founded in 2003 to manufacture only electric vehicles, has exceeded a value in the stock market of 100,000 million dollars (102.660 million, exactly; 92.615 million euros) and has positioned itself as the second most valuable automobile group in the world after exceeding to the German giant Volkswagen, whose quotation gives a market price of 99.798 million dollars. The Japanese group Toyota He leads that classification, with a value of 233,000 million.

Tesla's reduced sales volume compared to its competitors approximates its market capitalization more to a technological one than to the traditional automobile industry. With just two plants in operation (one in the United States and one in China) and one under construction in GermanyLast year, it barely sold 367,500 vehicles, which meant meeting its expectations for the year due to the low range of expectations.

Its strong price has even overcome the fiasco of the presentation of its future ranch truck, when Musk broke the window pane when he had assured himself moments before it was unbreakable. That failure for the image of the brand generated a scare to the price of the company that lasted a few weeks, but that stain has faded over time: the shares have since risen 70% and have perched at 569 euros to They quote today. The company seems to have driven away the problems it had from production and has been presented in 2020 with the intention of expanding its small catalog with two new models. But the takeoff on the stock market is also explained by the best results obtained in the third quarter of its fiscal year, which does not mean making money: it lost $ 907 million, but only between July and September did it earn 150 million.

But even so, their figures are far from what companies with which they compete for volume can offer. Volkswagen Group, with a wide range of brands in the consortium, sold 10.8 million vehicles last year and even one of its smaller brands, the Spanish Seat, sold more cars than Tesla. Toyota, meanwhile, between January and November of last year stood at a figure close to those numbers, with 9.8 million vehicles.

The revaluation of Tesla will impact the pocket of Musk that, in 2018, managed to close the largest compensation plan ever seen in a company. According The Wall Street Journal, exceeding that threshold could determine the unlocking of a payment of more than 50,000 million for Musk, which has waived salaries and bonuses in exchange for the new remuneration model approved by its shareholders in 2018. Although to meet those expectations the valuation so high of the company would have to be maintained for months.

The sorpasso Tesla arrives when Volkswagen shares maintain an image of sawtooth that has accumulated for two years. His great offensive to launch electric cars has not had a prize in the stock market and those messages that two years ago affirmed that Tesla had lost the advantage he maintained in the war of the battery cars, especially because of the new stage that were lighting some were missing brands, the highest-end, of the German group.