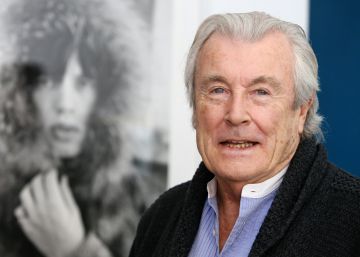 British photographer Terry O'Neill has died at 81, as Iconic Images reported on Sunday, a firm that represented him. O'Neill became famous in the world of fashion and celebrities, for portraying the Beatles or the Rolling Stones, among others,

The famous photographer, who was awarded the Commander of the Order of the Order of the British Empire (CBE), left a great legacy of works that remain in the Portrait Gallery in London. "Anyone who has had enough luck to meet him or work with him can attest to his generosity and modesty," an Iconic Images spokesman said Sunday. "As one of the most iconic photographers of the last sixty years, his legendary snapshots will remain forever in our memory, as well as in our hearts."

One of his last public appearances was last October to collect his CBE award from the Duke of Cambridge, Prince William, at Buckigham Palace. O'Neill, who died this Saturday and suffered from prostate cancer, told the media that this recognition has "surpassed anything" that has happened in his life.

The works of this photographer can be seen in art galleries and also in private collections around the world, in addition to having been magazine covers or movie advertising. According to the Royal Photography Society, O'Neill was able to capture the culture of young people in the late sixties, better known in the United Kingdom as the "vibrant 60s", with the Beatles musical group at the highest moment of their fame.

In addition to photographing rollingHe also took snapshots of David Bowie, Led Zeppelin or Eric Clapton, while Michael Caine and Raquel Welch were among his best friends. Queen Elizabeth II and former South African president Nelson Mandela posed for O'Neill, who was married to actress Faye Dunaway from 1983 to 1986, but years later married a former fashion executive, Laraina Ashton. He also took photos of Audrey Hepburn and Elizabeth Taylor and other celebrities such as Terence Stamp or Frank Sinatra, while also working for several James Bond films.