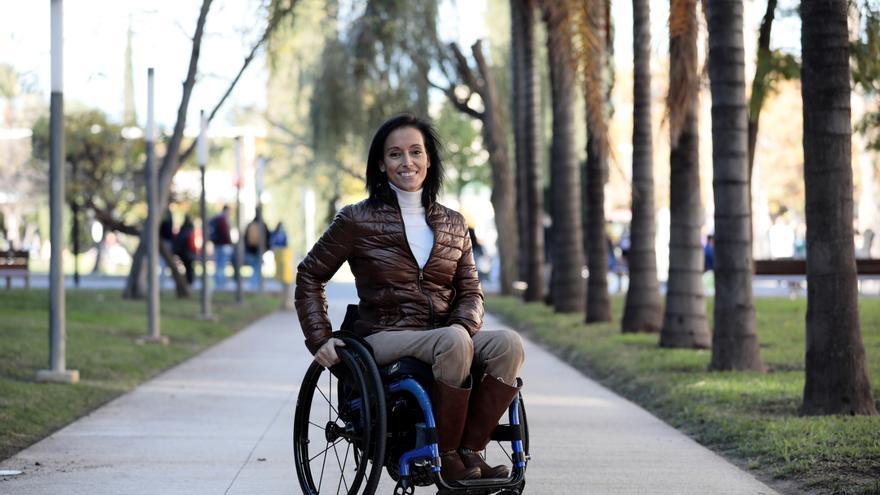 Strolling through Teresa Perales' house (Zaragoza, December 29, 1975) has to be the closest thing to visiting an Olympic metal museum. With its corresponding audio guide to explain each achievement in detail, with a map so as not to skip any stay and, of course, you should go early because the swimmer's record is overwhelming. This summer in Tokyo he got his 27th medal. Which makes her the most successful Spanish athlete of all time in the Paralympic Games.

The joy for the silver harvested in the 50 meters backstroke S5 It was short-lived, since Perales had a major scare during his stay in Japan. The Aragonese was admitted to a hospital in the Japanese capital after suffering a series of seizures and spasms at the conclusion of the last of the four tests in which she took part in the Games, the 4x100 meter relay.

Perales spent eight days under the supervision of doctors in Tokyo before returning to Spain in a medicalized plane and spending another two weeks in a Madrid hospital. Continue being an enigma the cause of the problem even though Perales has undergone many checkups since the incident.

I have not appeared here for a long time, but after the Paralympic Games I have been admitted and for a few days I have been back at home recovering. I wanted to explain what is happening to me, what these days have been like and thank everyone who has always been there. (P1) pic.twitter.com/asRCugxsEc

The shock was considerable, yes, the swimmer herself launched a message of calm at the beginning of October in a video distributed on her social networks: “It has been a long journey from which I am coming out little by little ”. Perales acknowledged that they were ruling out various diseases such as a tumor, a stroke or meningitis. However, science has not yet found an answer to what happened to the athlete at the Games.

Elite athletes are made from a special paste. Above all, those who practice adapted disciplines. Difficulties are the order of the day and the fundamental thing is to find solutions. Lowering your arms or surrendering is not allowed and if something appears on your horizon, the argument that prevents you from fighting for it has to be very serious.

A retreat has not crossed his mind. He admits to having "between the eyebrows" the Paralympic Games of Paris 2024, to which he would arrive with 48 years. “I continue with tests and no diagnosis, but it doesn't worry me either. What happened to me was very serious, but since I am now well and without medication, I have already forgotten. I'm stupendous, I live a completely normal life, "he said in an interview with Efe.

For someone who has 27 Olympic metals, attending an appointment like the one in France would have a clear objective: to increase their collection. With one more he would reach a magic number. The 28 of another legend of the pool as it is Michael Phelps. The American is the athlete who has hung the most medals in the history of the Olympic Games.

It is true that it will not be easy for Perales. As it was not last summer in Tokyo. The one from Zaragoza recognized that it was the medal that has cost him the most throughout his career. And it is that in May he suffered a left shoulder dislocation and recovery gave him too much trouble. So much so that after one month of the competition, he could only swim with one arm. Despite all those ingredients in the shaker, he brought out his class and his expertise to win silver in the 50-meter backstroke S5… With a Spanish record included.

The last medal in an impressive series that Perales started in 2000 in Sidney getting up to five times on the podium. In Athens 2004 were six medals, in Beijing 2008 got five, in London 2012 repeated a half dozen that is its top and in River 2016 was four sacks. Plus that of Tokyo, 27 in total that are divided into seven golds, ten silvers and another ten bronzes. And it would not be convenient to leave behind the 22 metals that the swimmer has been obtaining in the World Championships and the 43 in the European. Close to a hundred in the big dates.

It is not surprising, therefore, that Teresa Perales was awarded the Princess of Asturias Award for Sports in 2021 in recognition of her entire career, for “becoming a example of overcoming for millions of people with disabilities around the world and an icon of international Paralympic sport ”.

The Aragonese lost mobility from the waist to the feet at the age of 19 due to a neuropathy. Before, she practiced karate and wanted to stay involved in the sport, but she did it in the pool. Basically because swimming was a cheap sport to practice and he liked the feeling of freedom he had in the water. He began his career with adaptive swimming in 1997 and in this coming year it will celebrate a quarter of a century of competition in competition.

Perales, who has also been a politician in the Cortes of Aragon and has written a couple of books and participated in a third, is an institution in her world. Not surprisingly, in September 2008 she was elected a member of the Athletes Council of the International Paralympic Committee and was in office until 2016.

In between, at the London 2012 Games, it was the standard bearer of the Spanish delegation at the opening ceremony. A year in which, in addition, he received the Grand Cross of the Royal Order of Sports Merit; the highest distinction for a Spanish athlete and, furthermore, with the honor of being the first Paralympic to obtain it.

Tokyo left a significant string of metals for Spain at the Paralympic Games. They were 36: nine gold, 15 silver and 12 bronze. Which translates into 15th position of a medal table in which China swept with almost a hundred golds (96). Among the achievements of the national team also stands out the victory of Susana Rodríguez (Vigo, March 4, 1988) in adapted triathlon, in PTVI class (athletes with visual disabilities). He did it with his guide Sara loehr.

Susana Rodríguez (r), along with her guide Sara Loehr, receive their gold medal in Tokyo.

Apart from her sporting successes, this Galician woman has been distinguished and recognized during 2021 for her work. Is resident doctor at the Santiago de Compostela hospital. In July he was on the cover of the prestigious magazine 'Time' due to his fight against Covid-19. At the beginning of the pandemic, he was on the front lines of the battle when the exact extent of the disease was still unknown and the Paralympic Games had not been suspended. Rodríguez made his priorities clear. He was not going to waste time going to Japan if he could contribute something in his field.

The Games were canceled, some light was seen in the midst of the pandemic and the triathlete was able to resume, in part, training. Always combining them with his hours at the hospital and, with the restrictions that were in force, he did it at home with a rowing machine, a treadmill and an exercise bike. A material that was managed by the Paralympic Committee. Japan was still in the goal of Vigo, who was born with a visual impairment caused by her albinism. See 5% for one eye and 8% for the other.

We couldn't be more proud of you. 🇪🇸

Magazine @TIME has dedicated the cover of its recent edition to Susana Rodríguez, for her great value as a Paralympic athlete and first-line doctor.

Rodríguez began practicing athletics and in 2008, when he did not get a place for Beijing, he chose to change discipline and go to triathlon. 13 years later the reward has arrived… and it has been in a big way. He took the gold in a test that he dominated from start to finish. He opened the gap in the 750 meter swim and did the 20 kilometers alone by bike and the 5 running until he reached the finish line. "One last", as she herself described.

But it was not his only participation in Tokyo. He also competed in athletics and was fifth in the 1,500 meters, class T11, with Celso Comesaña, your guide. He played the final two days after the triathlon and paid for the physical effort. The extraordinary is because Rodríguez became the first Spanish to compete in two different sports in the same Paralympic Games. Absolute pioneer.