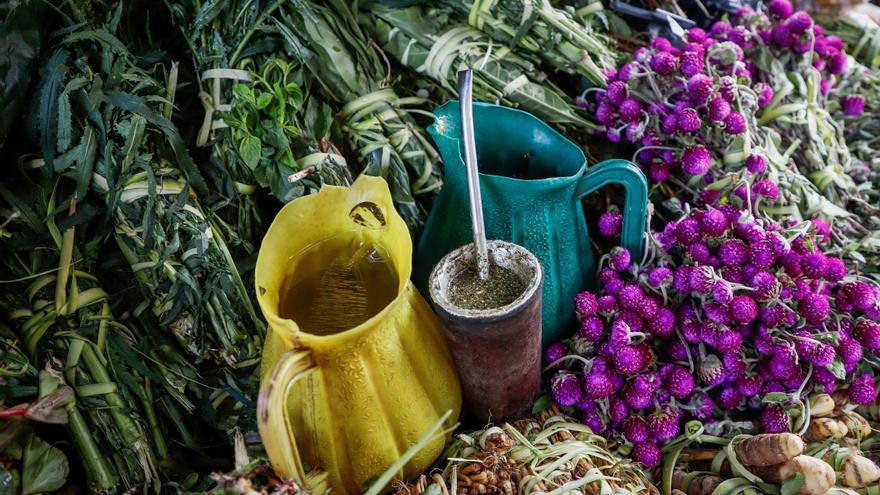 Asunción, Feb 27 (EFE) .- Ancestral legacy of the Guaraní people, of the therapeutic knowledge of their traditional plants, allied against the high summer temperatures, the tereré is an inherent part of the culture of Paraguay and as such was remembered this Saturday in Asunción , on the day that cold mate is commemorated, the consumption of which constitutes a whole social rite.

And the fact is that the thermos and the guampa, the glass in which the tereré is drunk, and the light bulb to absorb it, are accessories as familiar to Paraguayans as the content it offers: the extensive range of yuyos or pohã ñana ( medicinal plants, in Guaraní).

Plants such as fennel or burrito, used as a remedy for stomach problems, horsetail, as a urinary facilitator, or ginger, as a preventive against the flu, are some of the herbs used for a cocktail in which yerba is mixed mate and ice.

An herbalist also made up of weeds considered energetic such as those mixed in “tereré Levantol”, a formula composed of lemon verbena, sarsaparilla and other roots that is also seen as a male aphrodisiac or useful for men who are losing faculties.

Or like the one prepared today by Silvia Torres, in favor of a standard combo: the white perdudilla, the Santa Lucía flower and the agriado.

And also served from the manual of tradition: letting it rest with the yerba mate and reserving that first sip for Santo Tomás.

The result is a drink that is in the cultural DNA of Paraguayans and that every last day of February is officially celebrated as Official Tereré Day.

This year the first since UNESCO declared these practices and knowledge inscribed in the culture of pohã ñana as intangible heritage of Humanity.

A culture maintained by a people proud of this heritage and that has also been sustained over time thanks to a sector that lives off the economy that generates the drink: the crafts of the thermos, the guampa, the mortar and, above all, the natural remedies crushed into that last object.

One of the people who today was recognized for this work was Natalicia Ramírez, who has been selling weeds for 45 years on the promenade of the same name, a large open-air herbalist in the complex of the popular Mercado 4.

Ramírez received from the Minister of Culture, Rubén Capdevila, a diploma for being the bearer of ancestral knowledge “On Traditional Practices and Knowledge of the Tereré in the Culture of Pohã Ñana”

Ramírez, who learned that knowledge from her grandparents as a child, when she sold in Market 4 or collected those plants in Villa Hayes, in the Chaco region, told Efe that she cannot conceive of a Paraguay without the reference of tereré.

“(The Paraguayan) cannot live without the tereré. She is a mystique,” said Ramírez in relation to the social act of sharing the tereré, which he described as “strengthening love.”

From the same ritual point of view, of a social gathering in which the tereré is passed from hand to hand, Javier Torres declared, also recognized today with the same diploma, and who for years has promoted this indigenous culture from the Literary Tereré.

“Tereré for us has an important meaning, it is a companion who accompanies us from day to night, it is our other self,” said the founder of that space to promote Paraguayan culture and traditions and the associated herbalism.

Torres appreciated the inclusion of this culture in the Unesco list of intangible heritage of Humanity, although he pointed out that it is now time for the sector to modernize to advance in that position.

In that sense, he reported that his association, with the support of various state institutions, will launch a training center for vendors in order to revalue the product and at the same time safeguard traditional plants, some in danger from deforestation.

“To maintain the recognition of UNESCO, a safeguard plan is needed so that this (the declaration) is maintained over time, said Torres.

Maxwell is “a dangerous woman who cheated on girls” to Epstein, says prosecutor

The Government relies on Canarian companies to vaccinate the laggards

“I think vaccines will protect us from Omicron as well.”

A food processor for dogs that prepares express and healthy menus