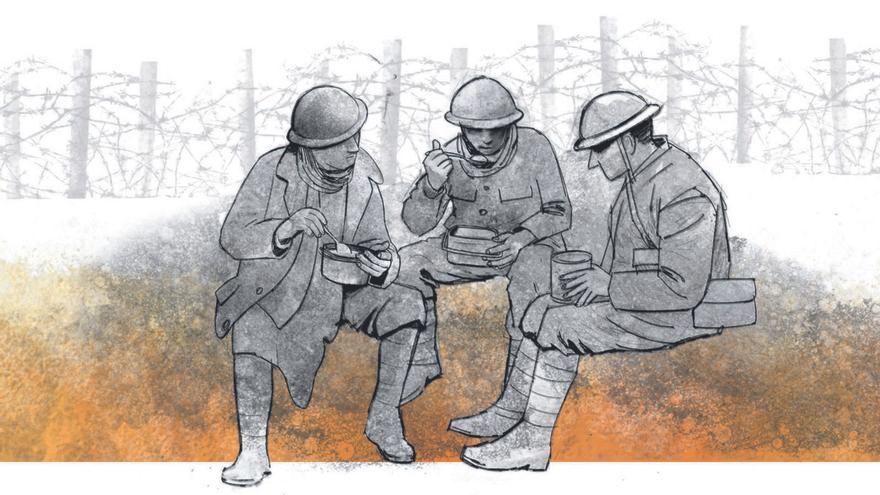 Genoese Ensign Giusepe Chioni, one of the officers held by the Austro-Hungarians after the infernal fighting, did not stop for a moment to miss Ligurian peasant dishes. Within what is the desperation of hunger, he did something that to anyone would seem an impossible task to undertake: he proposed to document the food of his land and other regions of the country with recipes. Another colleague of his who suffered the same fate, Giosuè Fiorentino, from the south, and of whom hardly anything is known, dedicated himself to the same culinary mission. The two, it seems, were interned in the same lager near Hannover, but it is unknown if at any time they had contact, they were treated, or if they belonged to the same flag. They agreed, yes, in the unstoppable vocation of alleviating hunger by keeping the memory alive until documenting it in a persevering way and it can be said that it was conscientious.

Chioni baptized her historic recipe book with the name of Ars culinaria, but the recipes did not see the light, accompanied by those of Giosuè, until a granddaughter of hers decided to give them to the press in the 21st century. It was published in 2008 under the title of La fame e la memoria ”(Ricettari della Grande Guerra, Cellalager 1917-1918). I came across a copy a couple of years later and to this day I am still amazed that someone in such dramatic circumstances would have had the resignation to dedicate their time not to satiating hunger with memories, something that is understandable, but to compiling recipes with informative instinct. We are facing an extraordinary case in gastronomic literature of all time, so unusual that it surpasses the established cliché that food is the great topic for Italians, even in the midst of a famine.

In the story that concerns us, not only one is the protagonist, but two are the Carpantas: a son from the north and another from the mezzogiorno. Both competed with the culinary encyclopedism of Pellegrino Artusi, who had written at the end of the 19th century Science in the kitchen and the art of eating well, widely considered the great culinary treatise of Italy. Moreover, there are those who are still determined to put the simple conception of “cucina povera” expressed in fame and memory with the honesty of the hungry and their veneration for food before the elitism of Artusi. Hunger erases all traces of snobbery, in comparison peasant cuisine wins, that of tradition. Artusi, on the other hand, prioritizes the recipes of the Italian bourgeoisie with his approach, and does not hide it. It is, instead, that of our Marquise de Parebere.

The experience of the German concentration camp in Celle must have been extremely harsh, compounded by the cold and the very meager rations of food. This became a recurring and disturbing thought for the Italian prisoners. In this way, the two main cookbooks of this story were born, which were finally brought together in one, prepared by Giuseppe Chioni and Giosuè Fiorentino. The two NCOs to fight against the nightmare of hunger and monotony invented an exchange of impressions on food with the rest of the inmates: they transcribed the recipes in notebooks, beyond belief, even with graphics, also made by hand, and drawings of the dishes described. The pages of La fame e la memoria feature French-inspired fricandos from Piedmont that Chioni brings up, in addition to the Ligurian pestos of his land, and the humble polenta. Through Chioni and Fiorentino I know about marro that is made with lamb tripe stuffed with entrails, boiled egg and ham, and many other things. From north to south of the peninsula, all of Italy is represented in this epic of famines. There are also fabled recipes with the spasmodic desire to fill the belly through imagination, such as the stuffed ground hedgehog in the oven. But all dishes are guided by the same reason: the need for home, the warmth of family members, in short, the desire to feel at home. Melancholy thus contributes to creating a misconception, because it is unlikely that the family kitchen was then as opulent as is described in the memories of the soldiers driven into delirium by the desire to eat. Perhaps the idea of ​​putting together so many tasty dishes is also associated with the equally compelling desire for freedom. A kind of gratifying reverie of captivity.