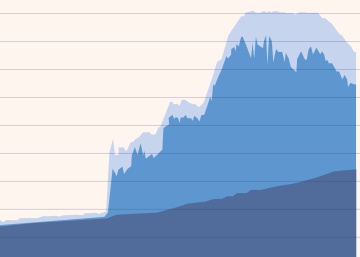 Central banks have flooded the market with liquidity over the past decade, although for more than a week such abundance is far from sufficient in the giant US money market. The entities obtain cash within one day in exchange for leaving safe assets, mostly US sovereign debt. But last Tuesday 17 something happened that did not happen for a decade, when the outbreak of Lehman Brothers blew up the air in the interbank market.

The interest rate of the repos market soared to 10%, more than five times the level of the current price of money in the US – in a band between 1.75% and 2% -, which forced the Fed to inject liquidity to stabilize prices. It was the first time in a decade that provided liquidity directly in the system, replacing the banks, an action that has had to perform successively during the following week.

The sudden increase in interest rates in the shortest term, motivated by a strong demand for liquidity, led us to think at times of some kind of emergency, in an extreme cash rush capable of evoking Lehman's ghosts. Such a rebound had to do with the need for cash from US companies to pay taxes and from entities to respond to the payment of bulky US Treasury issues. In addition, the nervousness had accentuated just the day before with the sharp rise in the price of oil caused by the attack on refineries in Saudi Arabia.

Experts discard however that the new injections of liquidity of the Fed with which these days stabilizes the money market are the prelude to another crisis. "The tension would persist in the short term were it not for the Fed's intervention, but we don't believe it is a systemic risk," Goldman Sachs said. "We see no sign of financial market stress related to the decrease in interbank loans," added in Pictet WM. And they point in another direction, the need facing the Fed to resume the increase in its balance with new debt purchases.

“Although the technical aspects explain the increase in rates in the short term, there are, however, deeper issues, in particular, the insufficient level of reserves. This could force the Federal Reserve to resume expanding its balance in the near future, ”says Sophie Casanova, economist at Edmond de Rothschild. In the press conference after the reduction of the reference rates last week, Jerome Powell downplayed the specific injections of liquidity in the money market, although it implied that more permanent decisions could be made at the next meeting .

In Pimco they believe that the Fed will decide to act to contain the current decline in reserves resulting from economic growth with the additional purchase of assets, as soon as next October. After an intense policy that shot the size of its balance sheet at a record level of 4.5 trillion dollars, the Fed decided to start reducing it in October 2017 – within the process of normalizing its monetary policy – and in July of this year decided to stop its reduction. Experts now point out that the next step will be to increase it again.

In Pictet WM, they expect the Fed to acquire 512 billion dollars of sovereign bonds this year. In Citi they also bet on the expansion of the Fed's balance, with purchases focused on the short term, and argue that the level of reserves is too low: the fact is added to the reduction of the Fed's balance, which did not happen before the crisis, that there is a structural demand for cash from banks, which must accumulate reserves with which to meet the new requirements of liquidity ratios. "In an economy that is growing and demands more and more liquidity, the injections of these days are a foretaste of some type of purchasing program in the coming months," they add to UBS.

The market gives a 62% chance that it will cut rates in another quarter point at the October 29 and 30 meeting, in addition to expecting the Fed to widen its balance again. The president of the Federal Reserve of Chicago said yesterday that the way to avoid problems in the money market is simply to raise the Fed's balance, while Lael Brainard, a member of the Board of Governors of the institution, said the turmoil in the repos market is "a simple imbalance", different from what happened in 2008.

In the opinion of BlackRock, the world's largest fund manager, tensions in the money market show that "there is simply not enough liquidity in the system," which should have been a reason for lowering the reference rates by 50 basis points. already at the September meeting.

Mexican minister speaks in Davos with Lighthizer, from the USA, and with Hogan from the EU

Officials “lose” 1,632 million due to the economic breakdown