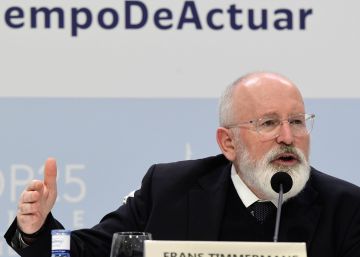 The Climate Summit negotiations held in Madrid, known by the acronym COP25, they advanced this Thursday in the middle of the “tension”, as described the Minister for the Ecological Transition, Teresa Ribera. Because, as happens in all the appointments of this type organized by the UN, the conflicting interests of the countries slow the development of the negotiation. From this summit, considered transitional, It had two fundamental objectives: one more technical and the other more political.

On the one hand, the article of the Paris Agreement that refers to carbon markets must be completed. While the European Union and other developed countries maintain a tough position so that the controls of those markets are robust, other countries – headed by Brazil, India and China – do not share that vision.

This division of blocks is very similar to that maintained with the other objective of this summit, the most political. These quotes end with a "decision" in which the conclusions and duties for the coming years are expressed. And the intention of the UN and the European bloc is that countries are urged in that text to present more ambitious emission cut plans from 2020. However, that other block of developing countries advocates delaying that moment. In fact, India has already announced that it does not intend to do so until 2023. Minister Ribera, without citing any country, has accused any of the States that are negotiating at this summit to use the “small print” of the climate pact as an excuse to advance more slowly.

Adaptation funds also flew over the COP25 traffic jam. "I understand the concerns of developing countries about the costs that they will have for them to adapt to climate change and that they must be supported by developed countries," the vice president of the European Commission for the Covenant told EL PAÍS on Thursday Green, Frans Timmermans. Despite all these tensions, Timmermans he hopes that an agreement will be reached at COP25. Of course, all the signs indicate that the summit will not be finished this Friday, as officially planned, but on Saturday; except surprise.