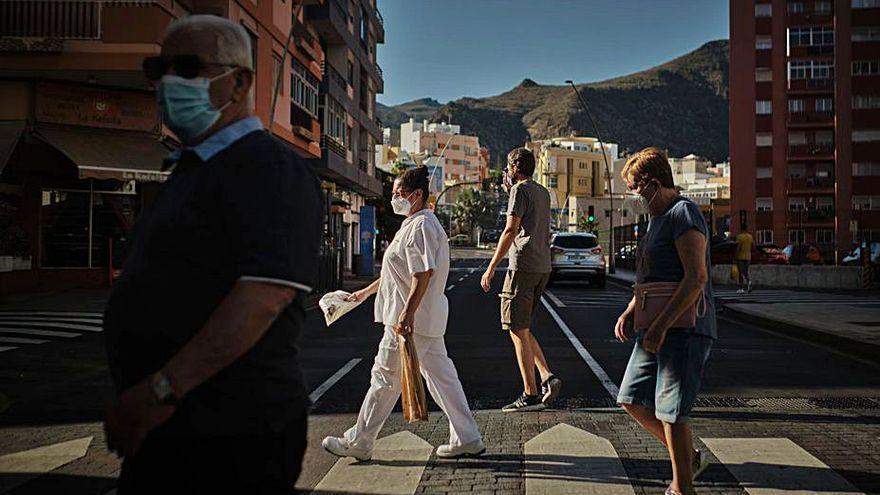 The Ministry of Health decided yesterday to increase to level 3 the traffic light in Tenerife for the third time this year. This measure, which will take effect next Saturday, It means closing down the interior of the hotel industry throughout Tenerife to prevent the advance of the virus. The Government has decided to locate the island due to the high level of incidence of cases of coronavirus in those under 45 years of age, the level of positivity of the island (7%) and the increase in incidence in people over 65, despite the advance in vaccination.

The level upgrade has implicit also the reduction of the maximum number of people who can stay in coexistence groups, which descends to 4 people, the reduction of interior capacity in most activities (a maximum of 33%), the closure of the hotel business at 11:00 p.m., the suspension of regional and island federated sports competitions and the reduction of capacity to 33% in wakes and funerals. On this occasion, and given the end of the alarm state, neither curfew nor perimeter closure may be imposed, so there will be no exit and entry controls on the island. Nor will visits to senior centers be restricted.

It should be remembered that It is the third time that Tenerife is in level 3. The first was from December 19 to January 16, the second from March 17 to May 4 and this third that will begin on Saturday 26 at 00:00 hours and will last at least 14 days, until Thursday 18. Regarding the elimination of masks as of June 26, the Minister of Health, Blas Trujillo affirmed that once they have met in Madrid, a determination will be made in the Canary Islands. In any case, he insisted that "it seems reasonable to link the mask to epidemiological levels."

With this decision, the Government has ignored the request made last Tuesday by the president of the Island Council, Pedro Martin, who opposed the "bolt" of restoration on the island head on. "It would not be fair to do so because that is not the problem," he said. Yesterday, he maintained his position, understanding that it is a measure that is taken "by health criteria." "I don't think setting level 3 is a substantial improvement", insisted the island president, who remarked that, from his point of view, to address the "serious" situation in Tenerife, it would be necessary to toughen the measures in other circumstances such as bottles and beaches as well as maintain the masks and not "always squeeze the sector business ». He also alluded to the need to make a greater effort regarding sanctions so that "more fines are given and their collection is expedited."

To impose this package of measures, the Government of the Canary Islands has followed the rules that emanate from the Plan of Actions of coordinated response to control the transmission of Covid-19, agreed between the Ministry of Health and the autonomous communities since October and updated last Month of May. Said document states that in the risk level 3, the territorial areas must "abolish the service in interior areas of the establishments".

Before the news, the hospitality sector on the island of Tenerife has not been slow to respond As on other occasions, it considers that the measure is very strict and that it affects the sector in a very important way, so intend to file an appeal against it as well as request explanations and data regarding where are the sources of contagion in the hospitality industry, as indicated Ramón Fariña, president of the Santa Cruz de Tenerife Restoration and Leisure Association (AERO). On the previous two occasions, the hospitality sector has been very critical of the measure imposed. On different occasions, the sector has denounced that this measure represents a "ruin" for establishments.

For his part, the mayor of Santa Cruz, José Manuel Bermúdez, who has also been critical of the measure, pointed out that level 3 represents "a severe blow to the economic sectors of the island, and for the people of Tenerife and Tenerife, who, for the most part, respect the sanitary regulations ". The mayor also made the legal services of the corporation available to the hospitality associations. The mayor also criticized the "lack of leadership" in Tenerife, given that the government has ignored the requests of the president of the island council.

The Minister of Health, Blas Trujillo, insisted at a press conference that the increase in cases in Tenerife is "multifactorial" and detached it from some specific circumstances, such as searches or the behavior of the population. "Our traceability reaches more than 70% of the origin, therefore, it must be ruled out that it is occurring due to this circumstance", declared the Director of Public Health, José Juan Alemán, who concluded that "it has always been the same system" and that the same method is followed in the two capital islands.

The only thing that differentiates one from the other is that "There is a breeding ground" for infections to occur, as well as the difference in population of less than 45 years between both islands. "It amounts to more than 48,000 people," recalled Alemán, who pointed out that population factors in Tenerife such as dispersion or population mobilization also have to do with it. In this sense, the Minister of Health, Blas Trujillo, added that to all this is added that the spread of the virus is not linear but exponential, which causes the curve to grow rapidly.