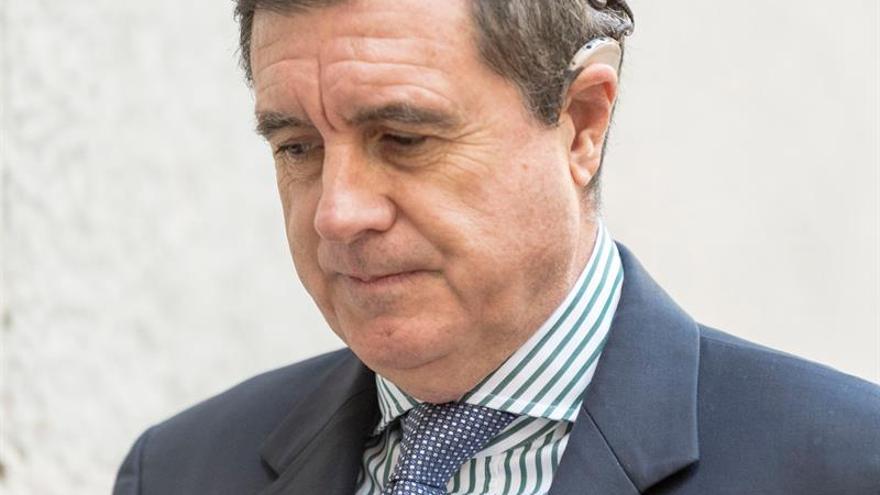 "It is clear that he has come to make fun of mere mortals." With these words, former judge José Castro, who was the scourge of the former president of the Balearic Islands and former minister Jaume Matas, defined, in an order issued in March 2010, the management carried out by the former leader of the PP during his last term as head of the Government Balearic (2003–2007). His elevated lifestyle and the extra costs in several of the macro-infrastructures promoted under his mandate had placed him in the crosshairs of justice.

That month, when the investigators had already begun to scrutinize under the carpets and harshly question the management carried out by numerous senior PP officials throughout those years, the one who had been the highest autonomous leader paraded for the first time before a Court . He did it before Castro and former prosecutor Pedro Horrach in an interrogation of more than 16 hours. Thus began a judicial journey full of scandals that would last for almost a decade: colossal works, hired contracts, awards whose investigation linked Genoa ... Since then, a ball of investigations involved a Matas exiled from the Balearic Islands after the electoral crash that He suffered in 2007 and that led him to abandon politics to move to the United States.

He was the prime minister of that Aznar cabinet - who came to power crying out against "the unemployment, waste and corruption" of the last Felipe González era - fallen from grace. Then others followed: Rodrigo Rato, Eduardo Zaplana ...

During all this time, the one who was Minister of the Environment in the second term of José María Aznar has been tried ten times. With more than 50 years of disqualification behind him and despite having been sentenced throughout this time to sentences that add up to more than eight years in prison, Matas has spent a total of two years and four months behind bars. Now the former 'popular' leader has benefited from the third grade after serving half of the four years and three months of deprivation of liberty to which he was sentenced in the framework of the Nóos case as well as for the irregularities in the adjudication of the reference hospital in the Balearic Islands. They are two of the last causes for which he sat on the dock. He no longer has any judgment ahead.

Matas' political career was always marked by his commitment to the economic and tourist growth of the Balearic Islands. Before his most controversial mandate, Matas had already been head of the Budget service (1989-1993), a position he accepted by opposition in 1989 and which he held until, in 1993, he chose to take a leave of absence to jump to the first political line. Minister of Economy between 1993 and 1996, that year he became president of the Balearic Executive after the resignation of his predecessor in office Cristòfol Soler, who in turn had replaced Gabriel Cañellas just ten months earlier. He had resigned due to his involvement in the irregular adjudication of the Sóller Tunnel, for which he obtained a bribe of 50 million pesetas of which he was acquitted after declaring himself prescribed.

Matas soon reached a political climax. In 1999 he became Minister of the Environment, a position from which he gave impetus to the National Hydrological Plan with the transfer of the Ebro as a fundamental pillar. In 2003 he ran again as a candidate for the Balearic presidency. He won by an absolute majority, just as Aznar had done four years before. These were good times for the Popular Party, which at that time was claiming to be the author of the "economic miracle."

During that term in the Balearic Islands, the construction of expensive projects, often criticized for their high ecological impact, ended up becoming the personal brand of the regional president who had just been Minister of the Environment. An imprint on which the courts would soon put the magnifying glass.

It all started with the construction of what would become its star infrastructure: the Palma Arena velodrome. Designed with the aim of hosting the 2007 Track Cycling World Cup, and after its inauguration, Matas offered its main campaign rally, the extra cost that its execution entailed for two years - in parallel to the high expenses of Matas and his wife, Maite Areal, carried out in furniture and luxury items - led the Anticorruption Prosecutor's Office to focus on the sports hall. And in Matas.

Investigations around the construction of the velodrome revealed more than 220 deficiencies in the works and found that the entity that was entrusted with the management of the works, the Illesport Foundation, never met. The investigations pointed to the false appearance of legality that the employers of the entity wanted to give to their work: they wrote 22 minutes of meetings that they did not hold while they gave form to the orders directly emanating from Matas.

The events gave rise to the initiation, in 2009, of the so-called Palma Arena case, one of the biggest causes of corruption in the Balearic Islands. Before breaking it down into up to 28 separate pieces, Judge Castro, instructor of this judicial macroprocedure, sought the connection between the extra cost of the velodrome (initially estimated at about 48 million euros) and the alleged illicit enrichment of Matas.

And it is that while the magistrate rummaged between the foundations of the construction, the Anticorruption Prosecutor's Office did it between the acquisitions of the former Balearic president. Among them, the purchase of a Mannerist-style mansion, in the heart of Palma de Mallorca, for about 980,000 euros. According to the investigators, the property was valued at 2.4. The many suppliers questioned about the renovation of the building told Castro that Matas paid them more than 300,000 euros in cash for the work they carried out.

The then incipient investigations were extended to the house that Matas owns in the Salamanca district of Madrid. The Prosecutor's Office maintained that the former president used a former minister as a front man to hide the true ownership of the property, located on Ramón de la Cruz street in a luxurious neighborhood of the capital. His wife's visits to various luxury stores in Palma were added to the inquiries, which led numerous civilian soldiers from the Civil Guard to search these establishments. Then scandalous bills rose that gave an account of the high lifestyle of the popular politician. Headlines spread about toilet brushes that cost 319 euros, up from more than a decade ago. And a long list of prohibitive quirks.

Despite verifying an "unjustified" increase in the assets of the investigated while he governed the Balearic Islands as well as a "repeated" use of opaque money in the acquisition of goods, Castro ended up filing these investigations - one of the separate pieces of the Palma Arena case - after find no evidence that determined the illicit origin of the funds and that the Matas couple laundered funds with the acquisition of their mansion. The former president always attributed his enrichment to a family inheritance.

The former minister, however, did not emerge unscathed from other of the numerous lines of investigation opened against him. His first conviction came in 2012, when the Balearic Provincial Court sentenced him to six years in prison for the payments he made, with public funds, to the columnist who praised his work in columns published by the newspaper El Mundo and at the same time wrote his speeches . The Supreme Court reduced the sentence to nine months for a crime of influence peddling.

A crime "against the rule of law"

The reduction did not prevent the Palma court from sending Matas to prison, rejecting, in a forceful order, replacing the prison with a fine: the magistrates considered it "unaffordable" for society that "the holder of one of the powers of the State in the date of the events commits a crime of influence peddling, "an illicit crime that, they pointed out, constitutes" a crime against the rule of law by the person who has been president of the Balearic Autonomous Community, who, precisely because he holds that position, greater impartiality, objectivity and probity must be demanded of him ".

The following sentence sentenced him, for a bribery crime, to the payment of a fine of 9,000 euros and to confiscation of 42,111 euros. It is about the amount that the former Balearic president received as a gift, while he held the position, through the fictitious hiring of his wife by the owner of a luxury hotel in Palma, Valparaíso. After appealing the sentence before the Superior Court of Justice of the Balearic Islands and before the Supreme Court, both instances ratified the sentence.

The third penalty that he was forced to take was the one that fell on him in the Nóos case. In February 2017, the court that tried the case sentenced him to three years and eight months in prison for spreading public funds to the entity led by Iñaki Urdangarin and his former partner Diego Torres. Matas was admitted to the Aranjuez prison to serve his sentence, to which six months were added for the case centered on the execution of the largest public infrastructure promoted in the Balearic Islands, the Son Espases hospital. The former regional president accepted ten months in jail for these events. Judge Castro came to suspect about the possible link between the rigging in the adjudication of this infrastructure and the reform works carried out in the central headquarters of the national PP, a hypothesis that could not finally be proven.

That of the Son Espases case is the latest conviction that, together with that of Nóos, has forced Matas to remain in jail. After these, the magistrates have sentenced him to other penalties that, however, the former president has managed to 'weather' with prison substitutions for fines. One of the most significant, also in the framework of the Palma Arena case, was that of seven months in jail to which the former leader of the Balearic PP was sentenced for the hiring of architect Santiago Calatrava, who charged 1.2 million euros of the Government - which must return Matas to the public coffers - for the preliminary project of an Opera palace that was never built.