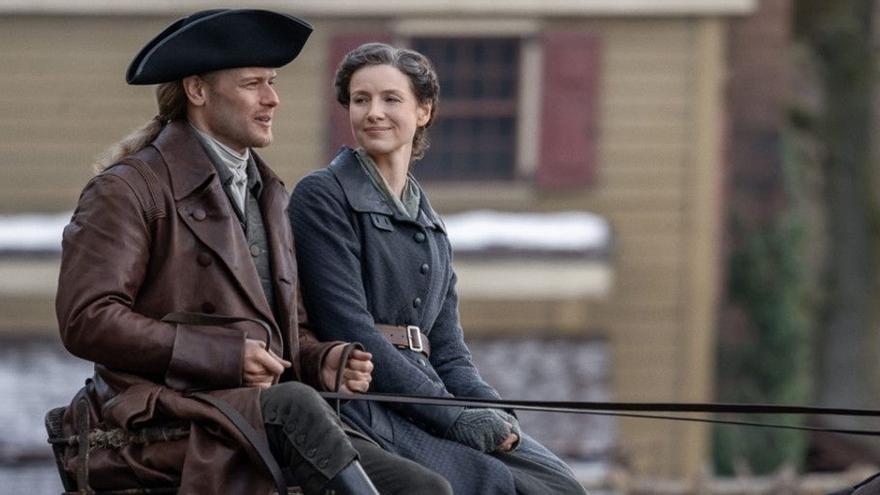 If there is a series that knows how to make the most of the spectacular landscapes of Scotland that is 'Outlander'. The fiction developed by Ronald D Moore ('Battlestar Galactica') based on the successful literary saga of the American writer Diana Gabaldon is centered on the passionate love story lived in the middle of the 18th century by the brave Jaime (Sam Heughan) and brash Claire (Caitriona Balfe), battle-tested romance, clashes between clans, and even time travel. Turned into one of the most successful period series on the current television scene, its fans they had been no less than two years waiting for will premiere the sixth seasonwhich finally arrives this Monday, March 7 at Movistar+. That is why it may be a good time to review 10 curiosities of this blockbuster, taking advantage of the fact that The Newspaper of Catalonianewspaper of the same group, Prensa Ibérica, that this newspaper was able to attend the filming of the previous batch of episodes.

1. North Carolina is in Glasgow!

Although the initial story of 'Outlander' starts in the Scottish Highlands, the series has been changing scenery season after season, passing through Paris and Jamaica until reaching North Carolina before the American War of Independence. What has not changed is the shooting location, located in the studios Wardpark in Glasgow. Located on the outskirts of the city, they are the largest in Scotland and are now exclusively dedicated to the series, with rows and rows of 'kilts' and period dresses, piles of wood for the houses of the protagonists and corridors full of photos which are an exhaustive tour of the chain's production seasons Starz.

The interior scenes of the house where Claire and Jaime live, in Fraser’s Ridge, are recorded in the Wardpark studios in Glasgow, but the team has built another house a few kilometers away, in the open air, to give realism to the exterior shots. Located in the middle of a green valley, next to a small stream, its location also allows you to take advantage of the natural landscape of Scotland by passing it off as that of North Carolina. To do this, in post-production they only add a small retouch to the mountains, making them seem taller, and the trees. And the level of detail is so careful that the series has an unusual department, the 'green department'dedicated to planting and replanting the grass, herbs and vegetables that appear in fiction.

If there is a trait that characterizes the Clan Fraser is the intense red color of her hair. But neither Sam Heughan (Jamie Fraser) nor Sophie Skellton (Brianna Fraser, his daughter in fiction) are redheads in real life, so both have had to adapt their hair to the demands of the script. First it was with dyes but, over time, both opted for wigs so as not to continue damaging her hair so much (she was even on the verge of losing it). "They are horrible. Glue and itching, especially when mosquitoes get under it, like torture," the patriarch has come to describe the experience with these hairpieces. It's not all bad, though: "It's cool how they change your image. A useful tool," he points out.

The plot of the series is quite faithful to the novels by Diana Gabaldon on which it is based, but it is also allowed to alter the story to give it more rhythm. One of the most important variations on the books is the 'resurrection' of Murtagh (Duncan Lacroix), the character who acts as Jamie's godfather. The rude Scotsman died in the bloody battle of culloden, while in the series he reappeared in the New World in the fourth season. "We hated losing the character that Claire could talk to about the future because she knew her secret," explains the writer and producer, Tony Graphia. "When we make changes, we try to fit the spirit of the books and are respectful of the source material," he adds. Her reappearance allowed him, incidentally, to live a love story during the fifth season with the protagonist's aunt, Jocasta (Mary Doyle).

5. The Gaelic and the Scottish accent

Not all the actors who play Scots in 'Outlander' are originally from those lands, so they have had to polish their accent to make their characters believable. For this they have a dialect trainer that helps them refine their pronunciation, and with the Gaelic fragments that they have to mess up from time to time. What Alexander Vlahos, one of the signings of the sixth season, who plays Allan Christie. Even Scottish performers like lauren lyle (Marsali) and Caitlin O'Ryan (Lizzie) have recognized that they have had to perfect their accent.

'Outlander' has not only allowed Diana Gabaldon seeing her novels transferred to the screen, but also making her debut as an actress. The author herself made a 'cameo' in the fourth episode of the first season of the series, titled 'The Gathering'. interpreted to Iona McTavish, the wife of a wealthy merchant who converses with Mrs Fitz in a very Scottish accent. Also appearing in the episode is the show's executive producer, Ronald D Moorebut he doesn't open his mouth.

Trisha Biggar replaced in the fifth season of 'Outlander' to Terry Dresbach (Emmy winner and wife of Ronald D. Moore) as the show's costume designer, who doesn't skimp on the details of the wardrobe. The department, which employs nearly 60 people of 17 nationalities, ensures that all garments (including footwear) go through a aging process so that it seems that they are part of the wardrobe of some protagonists who live in the middle of the 18th century. As an example of the complexity of his work, just one example. Last installment, the tailor made 87 pieces of clothing just for Jamie. Go adding...

The 'Outlander' team was clear that the first thing they had to do for the series to start shooting was to choose the actress who would play its protagonist, Claire, the married English nurse from the 1940s who would end up meeting the love of his life in the eighteenth century. However, the interpreter who would finally give her life, the former model Caitriona Balfe (had paraded for Chanel, Dolce & Gabbana, Givenchy, Louis Vuitton and Victoria's Secret)She was the last to join the cast. She did it only two days before filming began, since they could not find the right actress. Of course, she was chosen "immediately" when she saw her casting, according to the 'showrunner' of 'Outlander', Ronald D. Moore.

The male lead of 'Outlander', Sam Heughan, is getting a lot out of his participation in the series. Not only because it has been his great launch as an actor (after trying several times in 'Game of Thrones'), but also because his involvement in fiction (where he has become an executive producer together with Balfe) has allowed him to continue developing other related activities with his native land. How to launch a whiskey and star in a docuseries about clans and spectacular Scottish landscapes with your friend Graham McTavish, who gave life to his uncle Dougal MacKenzie. It's called 'Land of Clans', it's available on Movistar+ and it has its own book (published in Spanish by Principal and with a prologue by Diana Gabaldon).

The magazine 'Variety' has confirmed these days what many fans of 'Outlander' had been claiming for a long time: a 'spin-off' of the series. Specifically, one prequel set before the intense story of Jamie and Claire, also developed by Matthew B Roberts, executive producer and 'showrunner' of the original series. Everything indicates that it could be centered on Ellen MacKenzie and Brian Fraser, Jamie's parents, although there are other alternatives: a plot about 'Virgins', Gabaldon's published prequel to the protagonist in 1740 France, or with the English lord John Gray (David Berry)since the character has his own saga of novels.