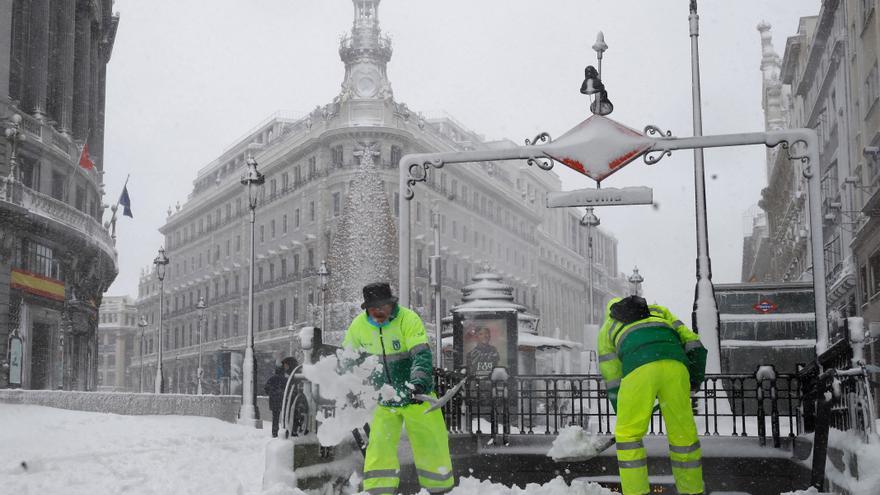 It seems hard to believe, but José Luis assures that he hardly found out about the historical snowfall on Friday in Madrid, and that he spent the night outdoors, in a park near Las Vistillas. He woke up at 5:00 am, “covered in snow”, as he quietly told last night, already under cover. In any case, he preferred not to repeat the experience and took refuge in the La Latina metro station, which was set up a day late, so that the homeless were not exposed to the cold wave that follows the snowfall. “Today here and it will be seen, day by day. By Monday it will be 15 below zero”, the man resigned himself, lying on a mat in a rectangular room in the subway.

The delegate of Social Welfare of the City Council, Pepe Aniorte, announced yesterday on Twitter that the subway stations would remain open all night and that the Samur Social staff would provide assistance at the Atocha, La Latina, Ópera and Tirso de Molina stations, to avoid “dangerous transfers” to municipal centers, now that the snow is compacting and giving way to ice. At the Opera house, two workers had just started their shift shortly before 11:00 p.m., who until then had not received anyone, except volunteers willing to help out. One of them, Pedro, even offered to bring coffees to the municipal employees, who politely declined. “We just started,” one excused herself.

From Ópera to Latina you could see the work of the cleaning services, who had removed the snow and created a kind of path between streets, winding between the many broken tree branches. The emergency services also cleared the doors of the hospitals, blocked the day before, and the Community of Madrid opened the vacant rooms of its Ayre Colón medicalized hotel, near the Retiro, so that professionals who could not yet return home could spend the night, also those who had had to double shift because the storm prevented them from being relieved. They were initial steps to recover normality, which was also noticeable in the lesser presence of people on the streets, once the novelty had passed and the excitement that had manifested itself during the day in key points such as Puerta del Sol, where there was community dance scenes

At the La Latina station there were, around 11:30 p.m., five people ready to spend the night in a room of about 20 square meters with a charged atmosphere and a gas outlet, mats, blankets and a good collection of warm clothes. , in addition to food for dinner and breakfast; namely, juice, milk, cookies, potato chips, some containers with pasta, a Christmas cake and roscón, among others. Enough to go to sleep on a full stomach.

Eugenio, 68, had had a bad night the day before, in a park in the Lista neighborhood, under a tree, with some cardboard and plastic. “Shame I had to give to the Social Samur, who called them twice and did not come,” he protested. They gave him a hand, at least, those of the Bocatas association, which feeds people in a situation of social exclusion. He arrived at the shelter early last night, around 8:00 p.m. A third occupant of the room refused a pillow offered by Ángel, the security guard on duty, also pending that those present had some comfort. In the meantime, up to a dozen people came successively with bags of clothes, mainly. “Blankets, cushions and clothes,” announced one of them, Elena, who deposited the bags, greeted those present and left.

The volunteers had to be aware of the midnight curfew, as the coronavirus is still present and the restrictions to prevent its expansion, in force, at least nominally. The two Samur Social workers who were at the Opera arrived a while before midnight to review, and a few minutes later the security guard’s ‘walkie-talkie’ sounded. They informed him that three people had come to sleep in Opera and that he knew where the Samur Social were. “They just arrived, now they will go,” he replied.

Roberto and a colleague were on the exit stairs from the subway station, both homeless, united in these cold days in an incipient friendship, smoking the last cigarette of the day. “We have cried and we hugged each other, and we started the year with a cool end, to get a house,” explained Roberto, who was finishing his cigarette as he addressed the subway passengers who were entering. Since they did not answer him, he raised his voice, and his friend indicated with a gesture not to be disturbed. When they went to sleep, the subway was still running.