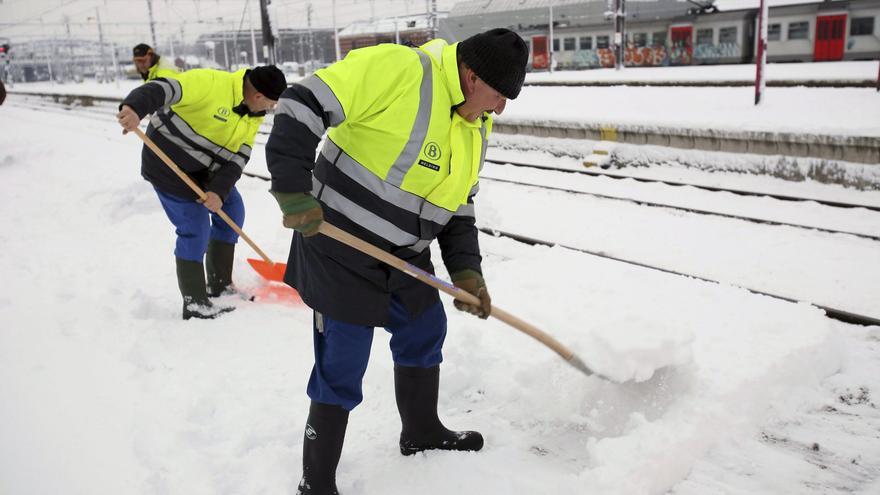 The historical snowfalls that the storm Filomena is leaving since this Thursday in much of Spain have caused, in addition to numerous road closures, cancellations and delays in trains and suspensions of flights and maritime links, the closure of Madrid airport and that of several sections of the capital’s ring roads.

Although the most intense snowfalls are forecast according to the State Meteorological Agency (Aemet) in the next morning, transport services, especially by road and rail, have already been affected by rainfall and the strong gusts of wind that are leaving the storm, which runs through Spain from south to north and is expected to continue active until next Monday.

Madrid, which is on red and orange alert, is one of the communities most affected by the effects of the storm, which has left unusual amounts of snow. Barajas Adolfo Suárez airport had to suspend all its operations at the last minute on Friday and divert landings to other airports due to poor visibility and runway conditions. The stoppage of operations lasts, at least, throughout Saturday.

This is what AENA has indicated in its Twitter account, where it asks travelers not to go to the airport. The airport manager, which continues to work on cleaning the runways, will provide new information on the activity at 8:00 p.m. and recommends that passengers check the status of their flights with their respective airlines.

The heavy snowfall and the “excessive” accumulation of snow along the Madrid-Cuenca-Valencia high-speed line has forced Renfe to suppress the last four services this Friday and all its trains with destination or departure in Madrid during this Saturday due to the snow and cold weather, both medium and long distance, as well as the Cercanías services of the Community of Madrid. It has also suspended the transversal services that go from Andalusia to Catalonia.

Throughout the entire Spanish geography, roadblocks, calls from the authorities to avoid unnecessary travel and the suspension of many activities, including sports, have been repeated.

Since the early hours of Friday afternoon, the Community of Madrid has also been closed to truck and articulated vehicle traffic. The large amount of snow has even forced to cut some points of the ring roads and accesses to the capital. The Minister of Transport, José Luis Ábalos, has explained in statements on TVE that there are cuts on the A-3, A-4 and M-40 and that the use of chains on the A-42, A-5, A is mandatory -2 and A-6. There have also been traffic jams for cars stopped on the M-30. All urban tunnels in the capital remain closed due to the accumulation of snow and the City Council has canceled the parking meters.

The storm has trapped vehicles in some parts of the Community of Madrid, where the Security Agency, Emergencias Madrid 112, the Military Emergency Unit (UME), firefighters and civil protection have been working all night to proceed to the rescue of the drivers and occupants. The Madrid emergency service has reported that “progress is being made and vehicles are released”, although there is still “a lot of work ahead”. The emergency services have rescued a thousand people in the region.

In Catalonia, the Government has asked to restrict mobility as much as possible during the weekend and not to leave home if it is not “essential and unavoidable”, given the forecast of a “severe” storm of snow, wind and rough seas, by which the movement of trucks of more than 7.5 tons will be prohibited.

In Castilla-La Mancha, one of the regions most affected by snowfall, more than a hundred roads have been cut from both the main and secondary networks, and five are completely closed in the secondary, four in the province of Ciudad Real and another in Toledo, in whose capital the use of chains in the urban area has been necessary. The Toledo capital has asked the UME for help to restart urban transport, practically paralyzed by the snowfall.

In Andalusia there have been road cuts due to snow and ice and a father and his minor son have been transferred to the Punta Europa hospital in Algeciras (Cádiz) after suffering serious injuries when a wall fell on them. In addition, truck traffic in Jaén towards Madrid has been suspended due to the storm and has conditioned the opening of the Sierra Nevada station, which offers only four skiable kilometers due to strong gusts of wind.

In Aragón, in the province of Teruel, classes have been suspended in 13 schools and the street market on Saturday; while the Teruel City Council has offered accommodation to the homeless in the pedestrian shelter.

In La Rioja the ports of Montenegro and Peña Hincada, in Viniegra and Ortigosa, in Camero Nuevo are closed and the chains in La Rasa and Sancho Leza, in Muro and Laguna, in Camero Viejo are necessary.

In Asturias, the Aemet has reported the risk of avalanches in the Picos de Europa, which will be more intense at the weekend and can cause avalanches with danger for people and vehicles.

Given the announcement of more intense snowfalls in the coming hours, both local, regional and state authorities have arranged special devices with snow plows, tons of salt and emergency and rescue services.

The Ministry of Transport has arranged 1,305 snow plows and 221,508 tons of flux to deal with snowfall in Andalusia, Aragon, Cantabria, Castilla-La Mancha, Castilla y León, Catalonia, the Valencian Community, Extremadura, La Rioja, Madrid and the Region of Murcia.

The Minister of Transport, José Luis Ábalos, has assured that there are “sufficient means” and also “they have worked.” “It has not caught us by surprise, the forecasts were clear and I would say that the most important device in history has been assembled in this regard,” he told Antena 3. Ábalos has insisted that unnecessary displacements be avoided.

Yolanda Díaz launches her first alerts within the Government