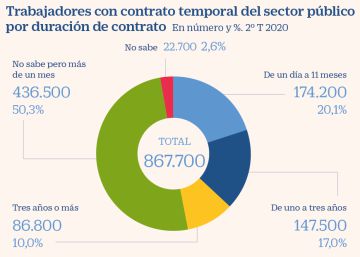 Usually the weight of temporary employment has always been greater in private companies than in public administrations, except in a couple of exceptional moments related to either severe crisis in private employment or times of heavy hiring of public employees.

The first time this happened, according to the EPA homogeneous series, was in the last three quarters of 2009, when the Lehman Brothers crisis in 2008 caused that in the two central quarters of 2009, in the midst of the crisis, the administrations hired 87,300 employees (90% temporary) while companies destroyed 236,600 jobs (84% of them permanent).

The destruction of almost a million temporary jobs in just two months at the beginning of the pandemic has been decisive for the percentage of temporary workers in the private sector to plummet three points in a single quarter, which has contributed to increasing the aforementioned gap , which increases the precariousness of public employment. In the same quarter, temporary employment among public staff fell by 25,200 people and permanent employment rose 3,200. In this way, the fall in the temporary employment rate was much less than in the private sector, dropping only six tenths to stand at 26.9%. Thus the gap between the two rates increased.

This poorer quality of employment in the administrations is also reflected in the fact that half of the almost 900,000 public employees with temporary contracts are temporary (occupying a position replacing their ‘owner’ or one that has not been officially called) or have a contract for work or service, ignoring in both cases the duration of their employment relationship, with what this means for planning a life and work career.

Temporality in administrations is 12 points higher among women, who have an eventuality rate of 32% compared to 20% of male public employees.

Regarding age, contrary to what happens in companies where temporary employment affects young people massively, half (50%) of public employees with temporary contracts were between 40 and 60 years old.