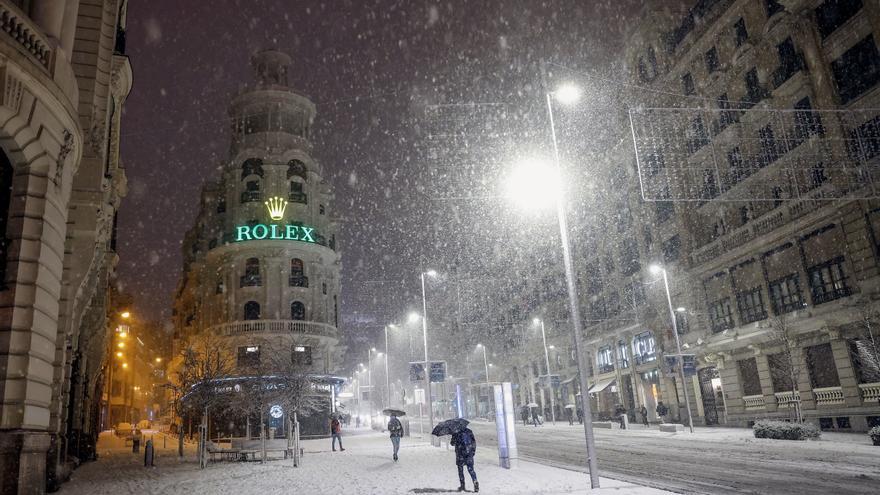 It snowed last night in Madrid like it hadn’t snowed for 50 years and Madrilenians took to the streets to experience the rare joy of burying their boots in the white until their ankles sink. The mayor, José Luis Martínez-Almeida, had asked please that people stay at homeThe storm was strong, with a red alert, and scares had to be avoided. No way. Children and adults came down to play, make snowmen and throw balls in a night of catharsis marred by the situation in the Cañada Real, where after the game there was no home with electricity to return to for 2,000 minors, waiting for the temporary generators promised at the last minute by the City Council to be installed at once.

Going out into the street at 11pm in the middle of the storm, which grew worse as the minutes passed, was an idea about which the responsible citizen might have objections. A man vehemently verbalized a similar doubt while looking with an incredulous, almost contemptuous face, at two cars (a Jeep and a Mini Cooper) that were going down the street of San Quintín almost to the Plaza de Oriente, where it is not possible to circulate not when the weather is good. “Where are these freaks going?” He roared. The occupants didn’t hear him and ended up turning around, a bit awkwardly. Around that time, Real Madrid was landing in Pamplona, ​​whose players were held in Barajas inside the plane for four hours, waiting for visibility to allow takeoff. The wait was a “torture”, according to El Correo.

Despite these episodes of bad humor and misfortune, the picture in the Plaza de Oriente was one of joy among the dozens of people who were there. The reflection of the street lamps in the snow multiplied the luminosity and it seemed that it was still sunset. Three men, closer to 40 than 30, laughed as they threw balls at the statue of the pre-constitutional King Philip IV. “Hey, you’re going over them and on the other side there are people,” one repaired. The other laughed like a child and repeated the operation.

A woman with a dog was rejoicing that the animal was content, in its natural habitat for the first time in its life, possibly. “He is a husky, this for him is paradise,” he celebrated. Before Arenal Street, a couple argued under the eaves of a building in what had all the signs of being the breakup row. She threw herself to the ground and got lost, then got up and tried to hug him, which seemed to allow herself to be done, but no; after a brief exchange of words, they returned to the brawl. At that moment it seemed that the snow was falling horizontally, directly into the mouth if not for the mask, otherwise soaked and useless.

Going up Calle de las Hileras, one of the risks of the storm was verified. The branches of the trees had given way and some were fallen on the parked cars. The driver of a utility vehicle was trying higher up, at the beginning of the street, to go down the road, impracticable. Three men ascending using ski poles warned him not to try. The pilot began to sweat and the vehicle, without chains, to skid. A neighbor from a balcony was laughing loudly. A few meters away, another man tried unsuccessfully to cover himself with some cardboard to go to sleep, trying not to get soaked. Nearby, in the Plaza Mayor, the cold was inviting us to even have a coffee with milk, but evidently the terraces were closed. A couple put the finishing touch on a snowman (quite improvable, Madrid is new to this art): a paper mask. Another duo was amused by the gesture and they took a photo.

In Puerta del Sol, the police. “It’s a quarter to twelve, you have half an hour to go home, then don’t say we didn’t warn,” an agent warned from the car to a small group. It was not clear yet at that time if the dispersal capacity of the aerosols snowing at full snow is equal to that of a normal day, but municipal police officials (some) were a priori willing to give the coronavirus curfew remain effective.

They did not intervene, however, in the pitched battle that took place in the Plaza de Callao, which faced some funny boys, as it were, with everyone who passed by. The best thing to do was to stick to the sidewalk. Already on the Gran Vía, walkers enjoyed the picture of having the road for their enjoyment. For a moment it seemed that Madrid was one of those small cities, without traffic, in which pedestrians rule and cars move patiently and hardly even whistle for those who walk to move away. A street cleaning vehicle converted into a snowplow-salt machine was moving slowly. “It’s one more day,” commented the driver. Two colleagues who were on foot had shown more enthusiasm minutes before: “It is a magnificent, luxurious night.” With very restricted circulation, hardly any vehicles were visible. A car (again a Mini Cooper) was trying to climb the Gran Vía at a snail’s speed, forcing the engine.

The snow thickened as one descended to Alcalá and Cibeles, unlike the crowd, which was thinning. At the bus stop, the information panels falsely promised that in “more than 20 minutes” the buses from Hortaleza and Palomeras would arrive. The reality is that the service was suspended. Many coaches were stranded in the snow and drivers had to spend the night inside. The president of the Community of Madrid, Isabel Díaz-Ayuso, indicated on the social network Instagram that she liked an image of a group trying to push a skating bus. It was one of his few signs of life back in the day. Your weekend vaccination plan to catch up with other autonomous communities he was frustrated, like so many other essential activities. Mercamadrid, the main souk in the city, with 370 companies, would not open on Saturday.

Arriving at Cibeles and along the Paseo del Prado a young man was advancing, wearing sneakers, without socks, speaking loudly on the phone: “This is crazy, ‘brother’, the uber and taxis have been canceled,” he exclaimed, with Hortaleza accent. At his side was a woman, who turned out to be Russian, and she evoked: “For me this is so, so, so normal. But I missed it, the noise of the snow.”

On Atocha Street, another couple from the local police, one tall, the other short, gritted their teeth. “What a journalist, there are no journalists on the street today, how do I know that you are a journalist. Go home, you’re already an hour late,” the stoppage dispatched. Almost in Antón Martín, a worker with great faith called from afar with a loud voice: “Friend! Beer?” In Tirso de Molina, some kids made fun of a couple of garbage men who were waiting for it to subside a little under the bus canopy. “There is no work today!”, One of them snapped, aware that the collection service is suspended, before receiving a ball from a friend who was a few meters behind.

Going down to La Latina, five young people posed in front of another snowman, this one well proportioned and smiling, who could give the hit in Denmark. They were elated. “It’s a historic day,” celebrated one of them, who insisted on bumping fists with those who passed by. It was snowing more and more and colder, and for the next day the same was expected. The mayor had made another appeal at midnight: “The weather forecast has worsened […] I ask the people of Madrid to stay at home tomorrow too. ”