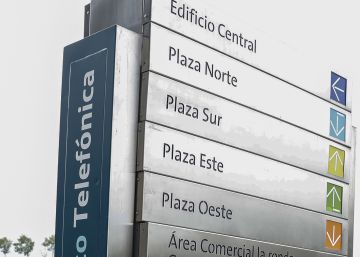 Telefónica has recovered in the stock market about 5.900 million euros since August 15, when its shares fell to 5.86 euros, its minimum price for the last 22 years. The operator capitalizes 36,329 million euros.

Since then, the stock has bounced 19%. In Friday's session, the matildes They rose 0.76%, up to 6.99 euros, although they came to be listed at times above seven euros. Of course, the titles still yield 4.6% since the beginning of the year.

The operator has lived a period of intense activity in all areas, to deal with investor confidence, lost amid uncertainties in countries like Argentina, with the economic and political crisis; United Kingdom, given the possibility of a hard Brexit; in addition to Germany and Spain, in fear of a tightening of competition.

In August, the president, José María Álvarez-Pallete, met the management and a few days later decided to advance the meeting of the board of directors to September 10, to analyze the situation.

The situation was complicated. Pallete and other executives, such as the CEO, Ángel Vilá, and the Secretary General, Pablo de Carvajal, reported the purchase of Telefónica shares in an attempt to send a message to the market of their commitment to the teleco. Pallete invested almost 600,000 euros. Along the same lines, Criteria Caixa, one of the reference shareholders, resumed the purchase of the operator's securities in the middle of the fall.

In the corporate sphere, Telefónica has promoted numerous draft movements during this month, including the signing of the new collective agreement in Spain, with an acceleration of negotiations in recent weeks. The CEV contemplates a new voluntary leave plan, which could reach 4,000 people, about 20% of the total workforce in Spain.

In addition, Telefónica has resumed the acquisition strategy, with the purchase of 50% of Prosegur's alarm business in Spain. The operation is valued at 300 million euros, and the teleco has the option to pay in cash or with the shares of its treasury stock. With the operation, both groups seek to accelerate the development of the alarm business in Spain and evolve the offer of residential security services.

The purchasing strategy has been in the background in recent years, where the group has worked on debt reduction, both organically and with the sale of non-strategic assets. During 2019, Telefónica has announced divestments valued at nearly 2,000 million euros, among which the subsidiaries in Central America and the data centers stand out.

In addition, Telefónica has begun analyzing the sale of 50,000 mobile towers, either to Telxius, its infrastructure subsidiary, or to other groups. These assets could generate 830 million euros in revenue and 360 million in oibda.

In the audiovisual segment, Telefónica announced an alliance with Atresmedia for the production of fiction content in Spanish throughout the world. Both groups have signed an agreement of intent that will culminate in the creation of a 50% investee company that will produce and distribute series and films for Movistar +, Atresmedia in even third-party companies, such as Netflix, Amazon or HBO.

In the commercial field in Spain, Telefónica announced its decision to eliminate the permanence commitments in all its Fusion products for the residential segment, both in new registrations and for existing customers.

Outside of Spain, Telefónica will be favored by the approval in Brazil of the new telecos law, which will allow for greater consolidation, as well as more options to sell assets, such as mobile towers and real estate. According to Brazilian bank ItauBBA, the operator could unlock assets for an amount exceeding 900 million euros.

At the beginning of the month, Pallete traveled to Brazil to meet, for the first time, with the president, Jair Bolsonaro. The operator is aware of the possible sales of assets that Oi, one of its main competitors, can immerse in a serious financial situation.

With respect to the financial markets, Telefónica returned to the hybrid market, with the issuance of 500 million euros, in which it reached a demand of 2,000 million. The eight-year obligations will accrue a fixed interest of 2,875% per annum, the lowest coupon paid by Telefónica in a hybrid for a similar term.