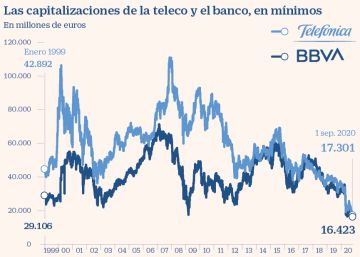 Every quarter, Stoxx, which belongs to Deutsche Börse, reviews the composition of its different indices. On Tuesday night it was learned that Telefónica and BBVA are abandoning the Euro Stoxx 50, the benchmark for the euro zone. The test was crucial because changes in draft were expected, and it has been. Both blue chips Spaniards say goodbye to selective. Santander remains at the Euro Stoxx 50, but leaves the Stoxx Europe 50, the European benchmark that includes securities from outside the euro zone.

The manager of indices such as the Stoxx 600, the Stoxx Europe 50, which includes British, Swiss and foreign companies, and its version for the euro zone, the Euro Stoxx 50, has decided which companies are eligible to follow in their main references.

Telefónica and BBVA, with capitalizations reduced to just over 17,000 million and 16,000 million (see graph), respectively, will leave the index at the end of the 18th of this month. The modifications will be effective on Monday the 21st. In both cases, the stock market declines over 45% so far this year.

The teleco chaired by José María Álvarez-Pallete, at lows that have not been seen since the mid-1990s, has lost about 94,000 million in value since the record it achieved in November 2007, when the Ibex was at its all-time high, in around 16,000 points. The operator has the honor of being, along with Santander and Inditex, one of the Spanish firms that has exceeded the threshold of 100,000 million capitalization. The second largest Spanish bank has also suffered. It was worth $ 71 billion 13 and a half years ago. Now its price is around 25-year lows.

BBVA and Telefónica had always been part of the Euro Stoxx since its creation in 1998, although they have entered and left other Stoxx indices. Santander, for example, has maintained its position in the Euro Stoxx 50, but is leaving the Stoxx 50 Europe, in exchange for the entry of the Dutch Adyen, which specializes in electronic payments. The bank chaired by Ana Botín falls 49.9% in 2020 and loses 31,000 million euros in value. It only remains as Iberdrola as Spanish representative in the Stoxx 50 Europe. The utility it adds up about 8,500 million after advancing 15% in the year.

The French bank Société Générale, the German hospital manager Fresenius and Orange, have also come out. In their positions are the Dutch Prosus (the international internet asset division of Naspers, the South African giant that owns a bundle of China’s Tencent) and Adyen, the German real estate company Vonovia and the French liquor maker Pernod Ricard. To determine that a security enters or leaves the Euro Stoxx 50, the capitalization adjusted by the free float (freely traded capital) and sectoral criteria.

Finnish escalator manufacturer Kone has also entered. “There will be many important changes in the indices, reflecting the strong volatility and weakness of some sectors (financial, telecoms and cars) and the strength of others: new technologies, means of payment and electronic commerce”, they affirm in Sabadell.

It is not an isolated case of Stoxx. Index managers are downplaying the worst hit sectors. On Monday, ExxonMobil, an iconic oil company on the US Stock Exchange, left the Dow Jones, having been a part of it since 1928. The pharmaceutical company Pfizer and the arms company Raytheon also came out. In exchange, the software company Salesforce.com, biotech Amgen and industrial Honeywell entered.

The four that stay. The Spanish representation, after the exits of the Euro Stoxx 50 of BBVA and Telefónica, would remain at a minimum, with Inditex, Iberdrola, Santander and Amadeus. Until today, the Spanish weight in the index is around 8%. The expulsions of the teleco and the bank would lower it to 6%.

Impact. Funds that replicate indices have on the radar what stocks are going to come out of their benchmarks. Sometimes, they anticipate the decisions of the managers; in others, as in the case of exchange-traded funds (ETFs), the price consequences are deferred until the expulsion has been carried out. The Euro Stoxx 50 changes will take place on September 18. This selective is the most important for fund managers who invest in the stock exchanges of the euro zone.