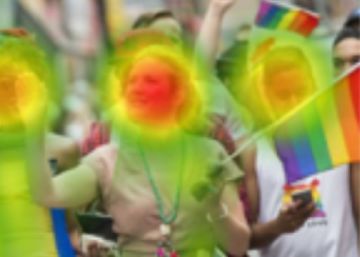 “We grow with biases. Although two people see the same thing, they draw different conclusions from the same image, ”warns Patricia Daimiel, CEO of Nielsen, one of the largest data measurement and analysis companies. These biases determine the attitude towards life and decision making. The company, in collaboration with La Merced Migrations Foundation, has developed a project to analyze the prejudices that we establish by the origin, religion, culture, gender or sexual orientation of people based on existing technologies for market research. Glasses that reveal what you look at and heat maps of sensory activity reveal them.

We grow with biases. Although two people see the same thing, they draw different conclusions

The idea of ​​this project arose in the presence of tools that already used Nielsen to analyze markets and audiences. “We wanted to turn it around and apply it to a social issue, put technology at the service of society,” explains Daimiel. For the study, one of the most accessible technologies was used: Eye tracking (eye tracking), which records and measures eye movements and pupil position by infrared light. With the data, responses to visual stimuli can be identified, as well as gaze patterns. In controlled environments it can be done from the camera of a computer or with virtual reality, but for more complex spaces, glasses are used.

In addition, heat maps were generated, a thermographic representation that highlights in red, orange or yellow the points of interest compared to those that do not attract attention and are reflected in blue or green.

The 23 volunteers participating in the test viewed a dozen images of people sheltered by La Merced Migraciones and detailed what attracted their attention.

The 23 volunteers participating in the test looked at a dozen images of people sheltered by La Merced Migraciones and detailed what attracted their attention. A subsequent interview allowed to identify the feelings generated by the most viewed areas of the photographs. “Where some identified party, struggle, inclusion or pride, others saw normality, family or boredom. The diverse conclusions come from prejudices; they are taken out without thinking, ”says the head of Nielsen.

Daimiel believes that it is an important starting point to “generate conversation”, to analyze the answers. In this sense, he comments that, before the “patterns” that are represented there should be a “responsible response” (as in the “perfect” models that are used in advertising) or be aware of the prejudices to anticipate the problems they cause , for example, in a personnel selection process.

There are other technologies used in market analysis that could be applied in the field of bias. They are the cases of electrocardiograms (ECG), which measure the activity of the heart and provide information on the emotional state; galvanometers (galvanic skin response, GSR), which detect subtle changes in sweating; or facial electromyography (EMG) to determine the movements of the muscles of the face in the face of emotions.

These tools, according to Nielsen, can help create groups that sensitize other individuals or manage diversity to attract or retain talent and have a “host responsibility” guide, among other measures.

These technologies are not the only tools used against prejudice. The National Islamophobia Prevention Program, coordinated by the Moroccan Association for the Integration of Immigrants and co-financed by the Asylum, Migration and Integration Fund (FAMI), has developed the Free app Islamophobia App, aimed at providing information against this bias as well as denouncing Islamophobic attacks anonymously and safely and fighting prejudice, especially on the Internet. “46% of these attacks occur on the Internet,” explain the promoters of the application.

Two million people of Islamic religion reside in Spain, who join those who, without being so, are labeled as such. Andalusia is, after Catalonia, the autonomous community where the largest number of Muslim population. The promoters also have the web islamofobia.es.

The eggplant, the peach and the clown, the most misunderstood emoji

Tips to keep your social networks safe this summer