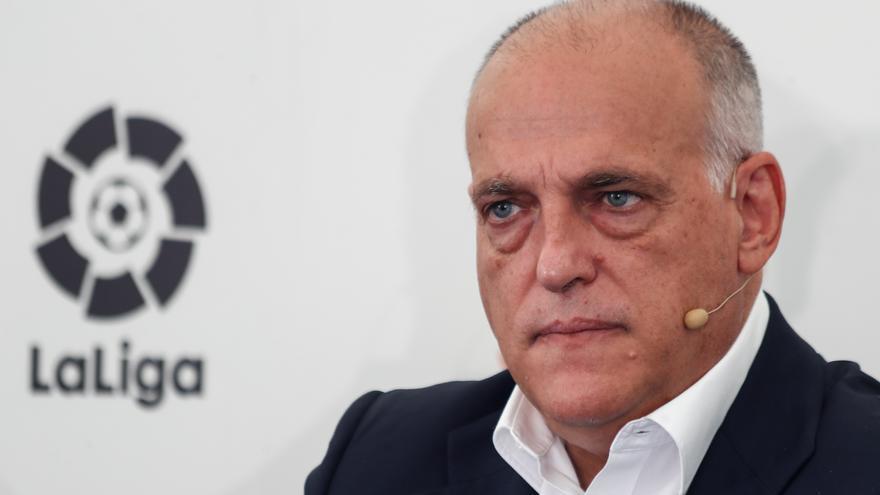 The president of the National Professional Football League Javier Tebas, he assures in a letter that “The LaLiga Impulso operation is a strategic operation with a partner to grow in the future, not a mere financing as proposed by the alternative project”Defended by Real Madrid, Barcelona and Athletic.

In the letter, Thebes responds to the letter issued by Real Madrid, Barcelona and Athletic noting that, “given the new letter that you have received sent by Real Madrid CF and signed by Athletic Club and FC Barcelona, ​​we can highlight little else since the same arguments are repeated with the sole intention of generating maximum uncertainty and confusion to achieve , in any case, that LaLiga Impulso does not go ahead ”.

Exposes that the proposal of Real Madrid, Barcelona and Athletic it is a debt operation “and, therefore, requires guarantees (as the presentation indicates) and the Impulse Plan is an equity operation (capital) and, therefore, the investor runs the risk of the business, whether it goes well or it goes badly, with no guarantees of repayment of the principal ”.

In this sense, iIt indicates that the structure “proposed by Real Madrid” revolves around a “super senior” financing., which receives a preferential right over the clubs, “since it accesses the first euros generated by the commercialization of audiovisual rights. It assumes neither business risk nor, in practical terms, financial risk. This collides head-on with the current financing structure of the clubs ”.

For this reason, he insists that this operation is not possible for many of the clubs that could never use the financing to develop their project, and even less to allocate these funds to grow as a club.

Conversely, affirms that the LaLiga Impulso operation is a strategic operation with a partner to grow in the future, “not a mere financing as proposed by the alternative project.”

Regarding legal considerations, he refers again to the assessment of the Uria experts, who also have the advice of Latham & Watkins for CVC, and adds that the La Liga Impulso Project “is fully compatible with the powers granted to LaLiga the Sports Law and Royal Decree-Law 5/2015. As the courts have repeatedly stated, the purpose of Royal Decree-Law 5/2015 is that the joint negotiation model can be carried out and so that it can obtain the best possible performance of the rights owned by the clubs, which requires a wide margin of freedom of action to the organizer. That is precisely the objective of the LaLiga Impulso Project ”.

In this regard, Tebas explains that “it is not, in any way, an exclusive LaLiga project. As is evident, this project will only be carried out if it is approved by the General Assembly by a large majority and will have the individual consent of each and every participating club. Ultimately, and how could it be otherwise, it is a joint project between LaLiga and the clubs ”.

In addition, regarding the capital invested by CVC in the Impulso plan, it stands out that it is sent to the clubs in the form of a participatory loan regulated by article 20 of Royal Decree-Law 7/1996, of June 7, which provides that “Participative loans in order of credit priority will be placed after common creditors”. Consequently, it ensures that all clubs can take this participative loan without asking their common creditors for consent.

“The clubs”, he adds in the letter, “are not going to grant any type of pledge or encumbrance on their rights, which also continue to be 100% of their exclusive ownership.. In addition, there is no right of compensation that creates a legal preference over other creditors of the clubs, but a mere mechanism of payments for compensation without effect in front of third creditors ”.

He adds that unlike “the many charges that other clubs have granted on their rights (among others, some of the signatories of the letter of this date)”, the clubs that adhere to the Impulse Plan will not have to register any charge or encumbrance. in the “Record Book of Loads and other operations on credit rights” referred to in article 29 of Book XI of the General Regulations of the The league.

It reiterates that the existing pledges that have been awarded by the clubs that join in favor of third-party funders will remain fully in force and will not be affected by the Impulse Plan.

Can be done immediately

In short, the president of LaLiga maintains that the La Liga Impulso Project is framed within the private sphere of self-organization of La Liga and relies on the full capacity of LaLiga and the clubs to organize their economic relations, for which he underlines which is an operation that can be done immediately and with full respect for the rules.

On the other hand, it says that the accusation of fraud of law that he has received “is not new, being a habitual reproach made by Real Madrid to LaLiga along with that of ‘expropriatory conduct’, abuse of rights or bad faith, against which, however, the judicial bodies themselves have not only always rejected them, but have even gone so far as to disqualify Real Madrid’s own conduct, considering that it is precisely the club who incurs in bad faith and abuse of rights ”.

It adds that within “of the almost forty existing resolutions” in which both the ownership of rights “and the scope of LaLiga’s competence, the basis on which the Impulse Project is framed and supported, are confirmed, we can highlight some significant examples of this” and states that when challenging the LaLiga Statutes after the Royal Decree-Law came into force, in a judgment of May 31, 2021, “not only is Real Madrid’s lawsuit dismissed, but it is accused of having abused Right and bad faith, having even blocked the distribution of income among the rest of the clubs through “procedural strategies in different court orders.”

It also states that “The particular use of the right to information in his capacity as an affiliate with respect to the challenge of LaLiga’s annual accounts was the object of reproach, both by the Provincial Court itself and by the Courts of First Instance“.

Tebas assures that “LaLiga cannot be subjected to a club that after more than three years clandestinely planning the operation of the Super League, presented the project just 6 months ago knowing that it was lethal for our league as numerous third-party reports have shown. . With deceptive arguments, disguising the salvation movement for all clubs and legally threatening LaLiga. Exactly the same as now ”.

“We already announced you”, continues, “For weeks we have anticipated days of media conflict and noise aimed at making us lose focus of the common goal of working for a better and stronger League. And we are seeing it: artificial diffusion in social networks, use of the usual media springs, generation of confusion, legal threats, pressure of all kinds… fortunately, it is already a modus operandi that we all know ”.

In the letter, Thebes conclude by saying that “we still have complicated days ahead because they will not cease in their efforts, so we will have to continue working for the common goal of a strong, competitive and future-oriented League.”